Amazon hasn't killed us yet! 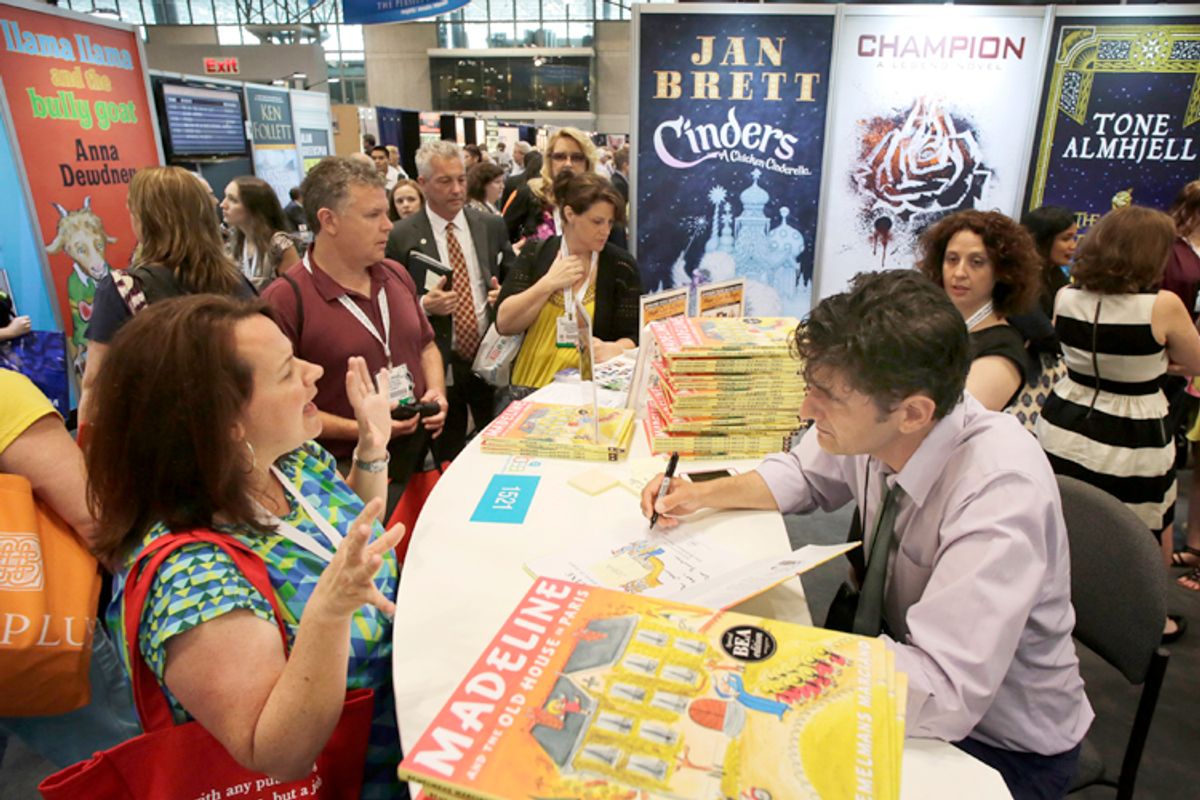 For an industry whose imminent obsolescence and death is announced every day, the book business seemed pretty chipper last week. At BookExpo America, the annual conference in New York during which publishers present their new titles to bookstore buyers and the media, one observer -- Michael Pietsch, CEO of the Hachette Book Group -- even claimed to have detected a "gigantic sigh of relief" rising from the assembled.

Among the relieved is John Sargent, CEO of Macmillan, who was interviewed onstage for the conference's plenary session. His cheerfulness was especially striking when you consider that three months ago, Sargent, the most outspoken of the major publishers sued by the Justice Department for allegedly fixing e-book prices in collusion with Apple, was forced to settle that suit with the DOJ for an undisclosed amount. (Penguin, the other most recent settler, had to fork over $75 million.)

Not that Sargent is any less critical of the DOJ's actions, which are widely seen as serving the interests of Amazon. Amazon has been selling e-books at a loss for years in an effort to dominate the market and drive other retailers, including bricks-and-mortar bookstores, out of business. "[The Department of Justice] decided that they will carry Amazon's water by discouraging new entrants to the market in order to protect people with a 92 percent market share," Sargent said to Becky Anderson of Anderson's Bookshops in Illinois and the outgoing president of the American Booksellers Association. Sargent went on to characterize "the senior guys at the DOJ and Eric Holder" as "just incompetent."

Given these frustrations, what could possibly have soothed the fears of this notoriously pessimistic industry? First of all, the pace of change has slowed down considerably. Sales of e-books have leveled off at a point somewhere between 20 percent and a quarter of all trade books sold. The closure of the Borders chain in 2011 alarmed many, but the result appears to have been a boost in sales for independent booksellers. The indies, while providing a smaller slice of retail sales than behemoths like Amazon and Barnes and Noble, are widely regarded as one of the most important avenues for introducing readers to books and authors.

This ability to persuade readers to try new books -- called "hand-selling" in the industry -- isn't easily replicated online. Those "Other people who bought this book also bought …" links you see on e-commerce sites generate surprisingly few sales. Market research has shown that most book buyers come to Amazon already knowing what they want, and that they rarely browse the site for recommendations. For these (and many other) reasons, the prospect of an apocalyptic retail landscape with no physical bookstores -- a possibility envisioned by many pundits a couple of years ago -- strikes fear in the heart of publishers and authors.

Sargent believes that "People are now realizing that they need to support their local bookstores or they will go out of business." Perhaps the closure of so many Borders stores has driven home this reality. Or it could be that a reduction in chain bookstores (Barnes and Noble has also closed some outlets) has simply redirected customers to their local indies.

Whatever the cause, the ABA, an organization that had been hemorrhaging members throughout the 2000s, has now seen several years of increases. Individual stores are doing better as well. The ABA's new president, Steve Bercu of BookPeople in Austin, Texas, told the crowd at the keynote panel that his store has enjoyed "the third consecutive best year in store history." The random selection of booksellers I met while wandering the expo echoed this upbeat news, although many continue to work hard to prove their worth to their communities by hosting events and collaborating with schools. "There's no reason for anyone to leave their house and come down to my store just to buy a book now," Bercu told the crowd at the keynote, so BookPeople emphasizes the "value added" offered by a local business.

As for e-books, while no one doubts they are here to stay, grandiose predictions of the demise of print have turned out to be unfounded -- or at least seriously premature. In a presentation titled "Do Kindle Owners Really Read More Books?" Michael Norris, a senior analyst for Simba Information, an independent publishing and media research firm, explained, "People buy an e-reader because they read a lot of books, not vice versa. Once they buy the device, they're making a commitment to read, but buying it doesn't in itself make people into heavy readers."

Furthermore, "a lot of people have a relationship with both formats." Simba found that one-third of Kindle owners spent more than $50 on print books in 2012 and that a quarter of Kindle users bought a print book at an indie bookstore in the past three months. Norris described print as "the AK-47 of formats," likening it to the assault rifle legendary for its ability to function well in dire conditions. To demonstrate this, Norris pulled out a hammer and pounded a paperback with it, then delivered the same hurt to Kindle, smashing it and sending a frisson through the audience.

One much-ballyhooed trend, the enhanced e-book -- in which video, visual and interactive elements are integrated into the text -- was dismissed by more than one speaker as a bust. These e-books are expensive to produce and many readers have complained that the added bells and whistles are more distraction than enhancement. Sargent noted that when his company offered the same title as both basic and enhanced e-book at the same price, buyers still opted for the plain version by 7-to-1. Barbara Marcus, president of Random House Children's Books, said that her company had had little success with apps and in the future would only create them occasionally, and only as components of print campaigns.

There were still a few wild-eyed prophets in attendance, however. At an otherwise sober panel on the future of e-books, Jason Merkoski, author of "Burning the Page: The eBook Revolution and the Future of Reading," said he hoped to see a time when publishers could enable him to communicate with his late grandmother. This would involve using artificial intelligence to "bring back people who are dead so you can have a conversation with them." If publishers can figure out how to "distill the essence of people into technology so you can retail that," it might become possible to "Buy a person." (These statements provoked a soft cuckoo-bird whistle from the woman sitting behind me.)

On the same panel, publishing expert Michael Cader offered more trenchant and down-to-earth remarks. He said he worried that "value is leaking out of the ecosystem. I fear we're seeing the end of the era of publishers as venture capitalists," who invest their funds and expertise in an author's work.

Michael Tamblyn, chief content officer at Kobo -- a company that sells e-books and its own e-reader, recently in partnership with independent booksellers -- observed that "discoverability" (helping customers find the next book to read) remains a big problem in the e-book market. "We need a bunch of different filters that can work on this massive wave of new writing," generated by the boom in self-publishing. "We have the market going through the slush pile right now in the form of free or 99-cent books, while we watch to see what emerges."

For the moment the public seems content to provide this service for nothing (or even at their own expense), which may be why so many of the publishers at BEA spoke warmly of the explosion in new avenues of self-publishing. "Anyone who wants to publish a book should be able to," said Jane Friedman, former CEO of HarperCollins Publishers Worldwide and founder of Open Road Media, on the keynote panel. Then she added that self-publishing success stories remain "one in a zillion." "The self-publishing phenomenon has alerted us to underserved markets," said Pietsch, "such as the huge market for erotic fiction, as pointed out by 'Fifty Shades of Grey.'"

As I've discussed in the past, far from threatening traditional publishing, self-publishing provides a way for authors to prove not only the appeal of their work but also their ability to market it. When standouts emerge, traditional publishers can sign them up at a minimal risk. "I have a lot of respect for the world of self-publishing and the empowerment it represents," said Sargent. But "authors for the most part do not want to be aggressive Internet marketing professionals. That's why most self-published authors are pretty happy when we call them up and say, 'Hey, we want to pick up your next book.'"