"Game of Thrones" Recap: "You're almost there, and you think you won't make it"

And lots of people don't, in a bloodthirsty, shocking episode 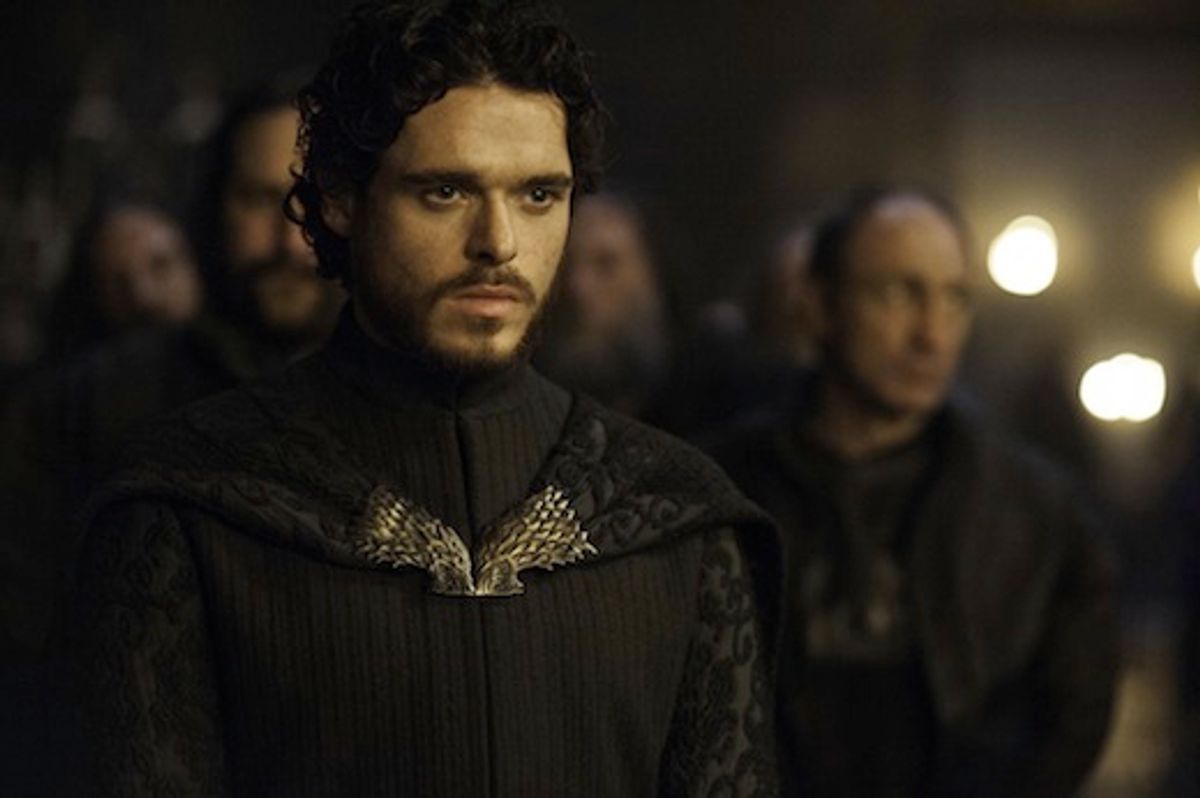 As it has in the two seasons that came before, “Game of Thrones” saved its best —and certainly its most— for second to last. The penultimate episodes are the ones with all the action: the beheading of Ned Stark, the Battle of the Blackwater, and in this week’s huge, brutal, never-forget-that-main-characters-can-die-too episode, the long awaited Red Wedding, complete with the slaughter of Robb Stark, the uterus stabbing of Talissa, and the throat slitting of Catelyn Stark, as well as the warging of Bran, the eagle attack on Jon Snow’s pretty face, and Daenerys’s ongoing bloodsportish foreplay with the dashing Daario.

All season, “Game of Thrones” has been very steadily setting up the Red Wedding. Readers of the book (and the spoiled. There has got to be some joke connecting the unspoiled and the unsullied) have been awaiting it since before the season began. But David Benioff and D.B. Weiss have been very canny about not forecasting the big, awful event on the horizon, giving us no insight into the Freys' or Boltons' plotting and letting Robb go on and on about strategy that he’ll now never get to use.  (Did the presence of a man on a rack on Robb’s Stratego board mean he’s responsible for Theon’s current circumstance?) In retrospect, the biggest hints have been the sentimental and romantic scenes between Talissa and Robb, sweet moments that were supposed to make their deaths more horrible. They were pretty effective.

Midway through this episode, Arya looks out onto the Frey's bridge, almost close enough to her mother and brother to sprint to them. The Hound, knawing on pigs feet, tells her she’s scared: “Of course you are, you’re almost there, and you think you won’t make it,” he says. She should be scared: she doesn’t make it. This entire episode is about that terrifying closeness, the so closeness of being almost, but never, ever, actually there. It’s an episode about how dreams and plan can almost come to fruition, only to be halted, destroyed, undone at the very last second, for no good reason, and be all the more painful for almost being real.

In the episode, various Starks almost finally meet again— and then don’t. They are moments and inches away from unification, only to scatter. Bran and Rickon and Jon can almost see each other, but instead of meeting, Bran heads north to look for the three eyed raven, Rickon and Osha trek off to safety, and Jon canters back to the Night’s Watch. Arya is finally in the same place as her mother and brother, but Robb’s stabbed, Catelyn’s throat is slit and spraying like a hose, and instead of hugs, Arya watches the Freys kill her brother’s wolf and gets conked on the head and carried off by the Hound.

As the wedding begins, Robb and Talissa, and even Catelyn, look at the ceremony and think, "there but for a woman who knows her way around field dressings, goes Robb Stark." The wedding at first seems to be a near miss: they are grateful for what it is not, unable to see what it is about to become. (Even the fool Edmere is relieved he’s not marrying an ugly girl.) Robb and Talissa are thinking sweetly about how their love marriage was the right choice, about the baby they are about to have, when they are really at a huge party celebrating their death.

This is consistently the most impressive thing about “Game of Thrones”: even as you root for certain characters and families, you can see— with your mind, if not your heart— that it’s all a matter of perspective. If we were watching the story through the Freys’ eyes, this episode would have been a rousing tale of a perfectly hatched plan, so meticulously plotted they hired a band to play a dirge when things got grisly. Robb’s casual willingness to have that young bride publicly bedded would have been worse than just “tradition." (We just saw a wedding from Sansa’s point of view, so we know this particular public virginity taking thing is more nefarious and frightening than that.) Roose Bolton's decision not to drink would have been admirable. Even Lord Freys crass words and bad jokes might have sounded like real talk.

But instead we are with the Starks, and the end of this episode hurt. Michelle Fairley, the actress who plays Catelyn, is usually very restrained. Like her character she’s a little bit cold. But she was so good in this episode becoming the point of audience identification. (There were a bunch of parallels between Catelyn and Arya this episode: they both begged, they both got violent, and they were both ultimately powerless.) She was the first to notice, like us, that something was wrong (my stomach sank when the door to the feast hall closed) and then she was the one to beg for Robb’s life. Fairley’s face and voice went from intense, gnarled passion to being absolutely drained of everything and anything as soon as Robb died with such speed and precision it was like she put on a mask.

The near connections didn’t stop at the Red Wedding. Ygritte picked Jon again, and again, and again, but he finally pushed her off. He asked her not to shoot the horse farmer and she missed. When he couldn't kill the horse farmer himself, she did it for him, and then still took his side. Trying to fight with him, he threw her to the ground, and she still didn’t believe he was leaving her. It was only when he was galloping away, that she realized he didn't want to be a team. They were standing next to each other— that close— and instead of getting closer, he got away.

Against the backdrop of all this murder and bloodshed, the presence of Daario, even when he’s slaughtering everyone in sight, is kind of comic relief. He's a very charming pussy hound, the guy who can never, ever stop flirting, even when the subject is war or slavery. (“I have no interest in slaves. A man can not make love to property.”) Daenerys clearly likes this. A lot.  I guess it’s good they saved something for next week's season finale.

Also next week, the fall out from the Red Wedding. Of all the things that were so close, but are now so far, the biggest may just be peace. Robb thought he could get Frey’s help and take Casterly Rock. Instead, Robb is dead, the Freys and the Boltons are empowered, the North has no king, and the Starks and their bannerman are seriously injured and scattered. The game of thrones and chaos continues. A happy ending was so close, but it was still too far away, and now, unhappiest of all, there's no end in sight.