"Prime Minister Erdogan is blaming social media, instead of his party's authoritarian overreach." 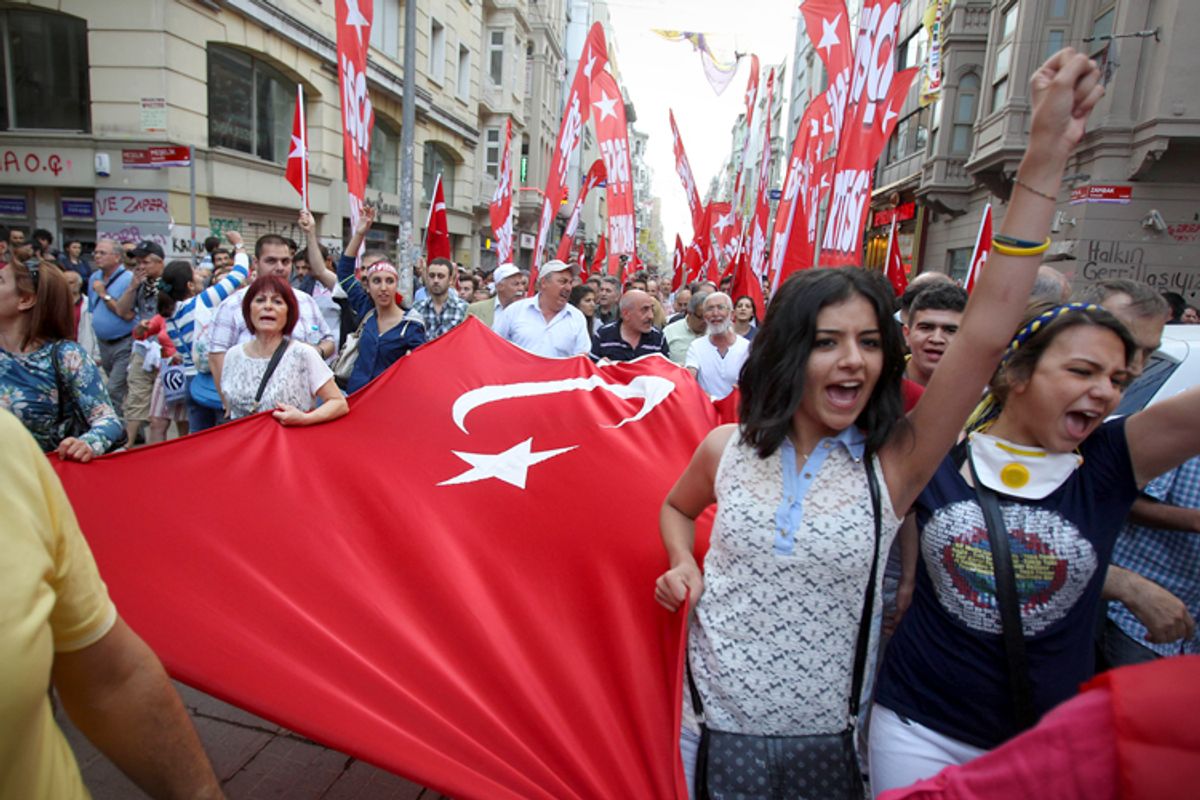 Protesters at an anti-government protest at the Taksim square in Istanbul, Sunday, June 2, 2013. (AP/Thanassis Stavrakis)
--

When I finally reached Zeynep Tufekci on the phone Monday morning she sounded both harried and excited. The University of North Carolina professor is currently a fellow at the Center for Information Technology at Princeton, where she specializes in the intersection of social media and the political process. She also happens to be a native of Turkey. The outburst of a massive protest in Istanbul over the weekend, fueled by Twitter and Facebook, hit her right where she lives, both personally and academically. On Saturday, she posted an insightful analysis of the events taking place in Turkey on her own blog. By Monday, her phone was ringing off the hook, even as she tried to keep up with the startling events in her home country.

In Turkey, what started as a small group of protesters attempting to stop the bulldozing of some trees in a public park developed with startling speed into a huge mass demonstration -- all in the absence of any meaningful coverage from traditional media outlets. Tufekci took some time out from her crazy morning to share her insights into the specifics of Turkey's situation, as well as explore the larger question of how social-media protests fit into the political process.

You've extensively studied the role of social media in the Arab Spring and the Occupy movement. Did you ever think your research interests would steer you back to your home country?

Not like this. Not like this. Turkey is different from Egypt. It's a fairly developed country with a well-established political system of representative democracy. The political scene in Turkey is not an empty space. A million-person demonstration in Turkey is not an unheard of thing. After the Arab Spring there was a demonstration in Diyarbakir, which is in the Kurdish region, of a million people, and people said, "Oh, Turkish spring!" I said: "Are you kidding me? In Diyarbakir they can get a million people together for a wedding."

The striking difference here is that this protest wasn't organized by a trade union or political party. It looks like the other leaderless protests we've seen driven by social media. And I never would have expected that in my own country. I can't think of another spontaneous large political demonstration in Turkey since 1980. We've never had anything like this before.

Prime Minister Erdogan said in a TV interview that "social media is the worst menace to society." He also singled out Twitter as the place where the "best examples of lies can be found."

He called it a curse! But what's so interesting is that all his people are on social media. The prime minister needs to talk to his own people. His foreign minister is on Twitter. The mayor of Ankara, who is also a member of the ruling AKP party, is on Twitter. He's hilarious -- he's always picking fights with people. Just about an hour ago he said, "I'm quitting Twitter, enough of this." And everybody was like, really? And then for the next hour he was retweeting people saying, "Oh no, don't leave." And then an hour later, "Hi you suckers, do you think I'd ever quit Twitter? Of course I'm back. "

I was in Doha when the Turkish foreign minister told a roomful of social media activists how great social media was. I watched him say this. He said it had helped change politics by bringing the opinions of the people to the government.

So here's what I think happened. I think Erdogan is probably one of the few members of his cabinet who is not really social media savvy, and he is now seeing that the public sphere cannot be as easily controlled as he imagined. This upsets him -- it shouldn't, but it does.

In many ways, Erdogan is a spectacular success. The economy is doing relatively well. He's thinking, I'm doing all this great stuff and there are all these troublemakers on the street: What's the problem? And he's blaming the one thing that he can see, which is social media, instead of the one thing of which he seems to be unaware, which is his party's pattern of authoritarian overreach.

The AKP was fairly and duly elected, but they have been trying to control too many things. That's why there is a backlash.

How does the traditional media play into this? In your blog post, you called the Turkish media "incompetent and cowardly." You pointed out that CNN International was covering the protests while CNN Turkey was showing a cooking show. Isn't one common factor linking all the social media-fueled protests the fact that traditional media has failed to properly do its job?

That's absolutely true. You had the same situation with Occupy; traditional media was covering things like fiscal debt, instead of inequality. The media failed in the U.S. But so has politics too. It's weird: On the one hand a social media-fueled protest looks a little bit like the extension of participatory democracy. But it is actually a response to the failure of representative democracies. People have no institutional outlets for their concerns, either in media or politics. This failure of representative democracy is a global phenomenon.

But as you've also pointed out, social media movements don't seem to translate into effective politics.

They know how to do "no." But there hasn't been much in the way of developing civic institutions that would either strengthen a representative democracy or extend it in the form of participation. There's a big gap in terms of translating this power of "no" and organizing it into some structure.

It is  clear that what needs to happen is a lot more experimentation. People want to get involved in politics. We have a lot of global problems, from this economic crisis that our overlords seem unable to find their way out of to global warming. And yet there are no civic institutions and no media institutions that seem to be rising up to the moment. This is why I hate it when the word "slacktivism" is used to dismiss social media protest. People are trying to find ways to be civicly engaged. If all they can do is sign a petition, that's a failure of politics. To blame the Internet for people trying to engage in politics and not finding efficacious ways seems to really miss the target. What has failed is the politics part of the equation, the institutional part of the equation.

What are the demographics of what's going on in Turkey? Is this a case where urban, liberal social-media-wielding elites are at odds with the conservative religious voters who make up the bulk of Erdogan's support?

No. Erdogan's political support is not just conservative. This is a successful government. A lot of people have supported the AKP for reasons which have nothing to with religion. And that's exactly why people are upset. The AKP weren't elected to legislate when people could drink alcohol. People voted for them because they modernized the government. I would say the conservative religious vote is maybe 20-30 percent?

The fear, of course, is this polarization carries on to the streets. Right now the polarization is only happening online, and only one side is on the streets. If both sides go to the streets, that would not be a good thing. This government's challenge is to try to find a way to back off, without alienating its conservative supporters, who think that the demonstrations are just a way for the secular sections of society to regain power. That's how they see it: You lost the election, it wasn't going your way, and so now you are breaking windows. This is part of the counter-rhetoric and they are not crazy. Until fairly recently, a woman with a head scarf could not go to university in my country. It's not like the grievances weren't real. The difference, of course, is that the AKP has been in power for 10 years now. They are no longer an oppressed minority. But they still haven't seemed to have internalized that fact.

How do you see this working out?

It depends on whether the government takes this as a strong message to back off, and accepts that it has been overreaching. Last night, when the Turkish papers went online with their new editions, I read all the conservative columns and I did not see one that said this was handled well. There's been a lot of concern with these urban renewal projects. People are seeing the last bits of green space in Istanbul replaced with shopping malls that are being built by people like the prime minister's son-in-law. Cronyism in the urban renewal project has been a huge problem. The original Gezi protest challenge involved only about 30 or 40 people camping overnight, kids camping to save trees. It was only after they were attacked viciously by the police that other people started coming out. The original group was small, but their message resonated because this cronyism is a growing problem.

I think if the government says, we're going to back down, we're going to stop this urban renewal business, stop legislating lifestyle issues, stop overreach and the intimidation of journalists, things will calm down. But if he continues to polarize the matter, that would be awful, because as I said, there are grievances and understandable feelings on both sides. And there are very large numbers of people on both sides. Turkey is not small country. So we shall see.