A party of cowards will end up in the minority

Democrats didn’t change Senate rules out of fear they’ll soon be out of power. That may well guarantee it 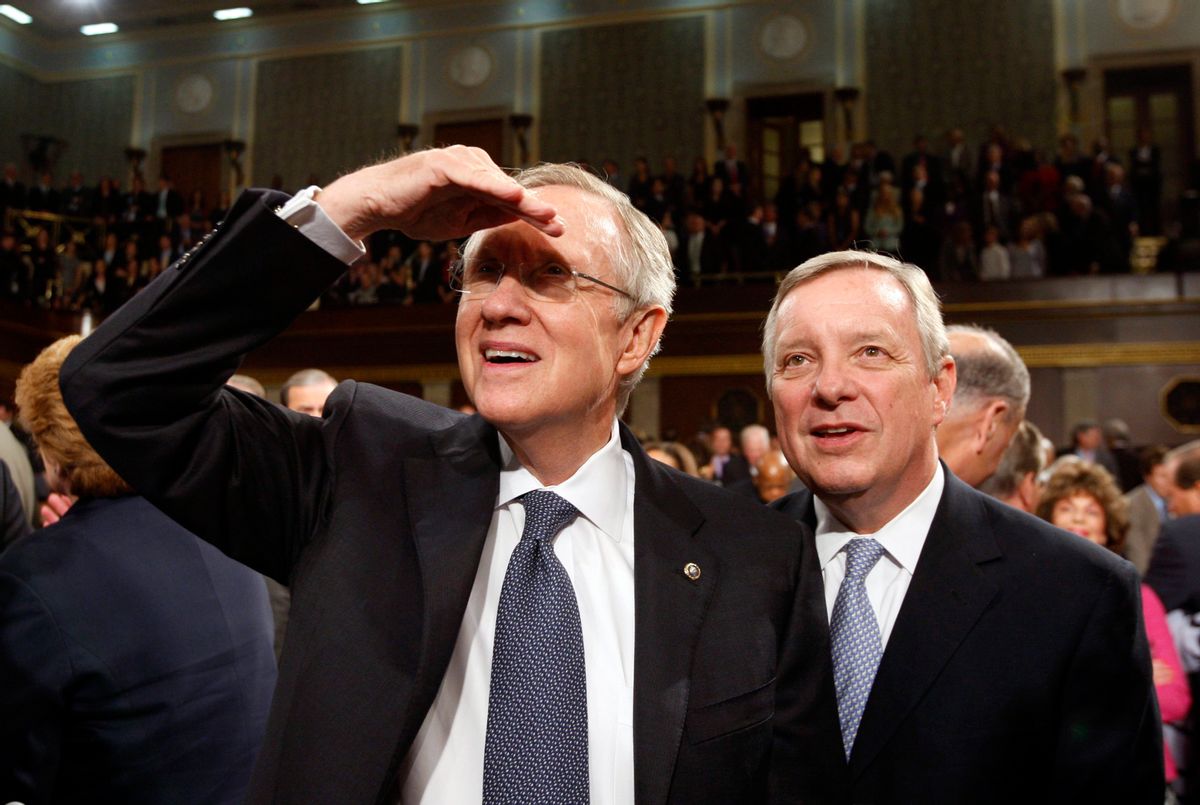 President Obama is on the offensive, boldly doing his job: appointing nominees to fill three vacancies on the U.S. Court of Appeals for the District of Columbia Circuit. Predictably, Republicans are howling about a power grab: Senate Minority Leader Mitch McConnell is calling Obama’s maneuver “packing the court” – you know, that’s what Franklin Delano Roosevelt tried when he unsuccessfully pushed to add new seats to the then-conservative Supreme Court, which was blocking some of his New Deal policies.

But today, a Democratic president doing his job and making appointments he’s entitled to make – whether to the courts, agencies or Cabinet posts – is treated like a Constitution-busting usurper.  A visibly angry Obama explained that it’s taking the Senate three times as long to confirm his nominees as George W. Bush’s, and as a result, 10 percent of all seats on the federal bench are vacant. “These are no slouches. These are no hacks,” said Obama. “These are incredibly accomplished lawyers by all accounts.”

Democrats aren’t blameless in this: Obama hasn’t nominated someone for every vacancy, at least partly because his administration’s own vetting process has tightened sharply in order to put forward the least controversial nominees possible and gain GOP support. (One of the three judges he appointed Tuesday, Patricia Ann Millett, worked as an assistant solicitor general under George W. Bush and Bill Clinton.) And Senate Majority Leader Harry Reid also shares responsibility: He passed up a chance to reform Senate rules to make it harder for the GOP minority to block Obama’s appointments in January.

Now, just as Obama turns up the heat with his three judicial nominees, Reid is talking about using the so-called “nuclear option” to allow judicial nominees, at least, to be confirmed by a Senate majority – not the filibuster-proof 60 votes Senate rules have lately required.

Senate Democrats, not just Reid, caved in January for a variety of reasons. Some wanted to avoid an acrimonious rule change on the eve of votes on immigration reform, gun control and a possible deficit deal, hoping to win significant Republican support for such legislation. Those senators believe in unicorns.

Others were said to fear giving up the minority party’s power to obstruct the majority party’s legislative agenda, because they fear Democrats will soon be in that minority. “Many Democrats are wary of such a change,” the Boston Globe reported on Tuesday, “because they could one day find themselves in the minority wishing they had unfettered filibuster power.”

Such cowardice, of course, is the best way to ensure that Democrats will soon be in the minority. If they allow Republicans to obstruct the president’s agenda, Democrats should assume voters will see no reason to continue to elect Democrats to the White House or the Senate majority.

A coalition of progressive groups called Fix the Congress Now has been pushing Reid and Democrats to use the nuclear option and change the rules. Now one leading member of that coalition, Communication Workers of America president Larry Cohen, is threatening Democrats who balk at a rule change with loss of union support.

"We're done," Cohen told reporters on a conference call Monday. "We have said to them that we are not going to sit back and see these agencies literally fall apart ... We expect them to step up and tell us why we [should] care if on something this moderate -- the ability of the White House to govern -- you're not with us."

Cohen wants the rule change to facilitate not just the confirmation of judicial nominees, as some have suggested, but agency appointments like seats on the National Labor Relations Board or the Consumer Financial Protection Bureau.

Cohen’s tough stand is long past due for progressives. Compromising with Republicans only emboldens them. Now the Senate GOP majority isn’t merely trying to block Obama’s judicial nominees, but to actually reduce the number of judges on the influential D.C. Circuit Court.

"I'm concerned about the caseload of this circuit and the efforts to pack it," Grassley complained. He’s trying to cut the number of judges from the current 11 to eight (the number of seats now filled) – even though he repeatedly voted to keep the number at 11 under Republican presidents. Judicial experts counter that the D.C. Circuit Court's caseload may be lower than others, but that's because of the complexity of the cases it hears, as the appeals court charged with handling big challenges to federal legislation and national security issues.

I’m happy to see Obama’s bold decision to put forward three nominees. But we’re only calling it bold because the president has been so conciliatory during his first three years in office – and because Republicans have represented his merely doing his job as an assault on the Constitution.