To the horror of pols and art lovers alike, the city's emergency manager is debating selling off its art collection 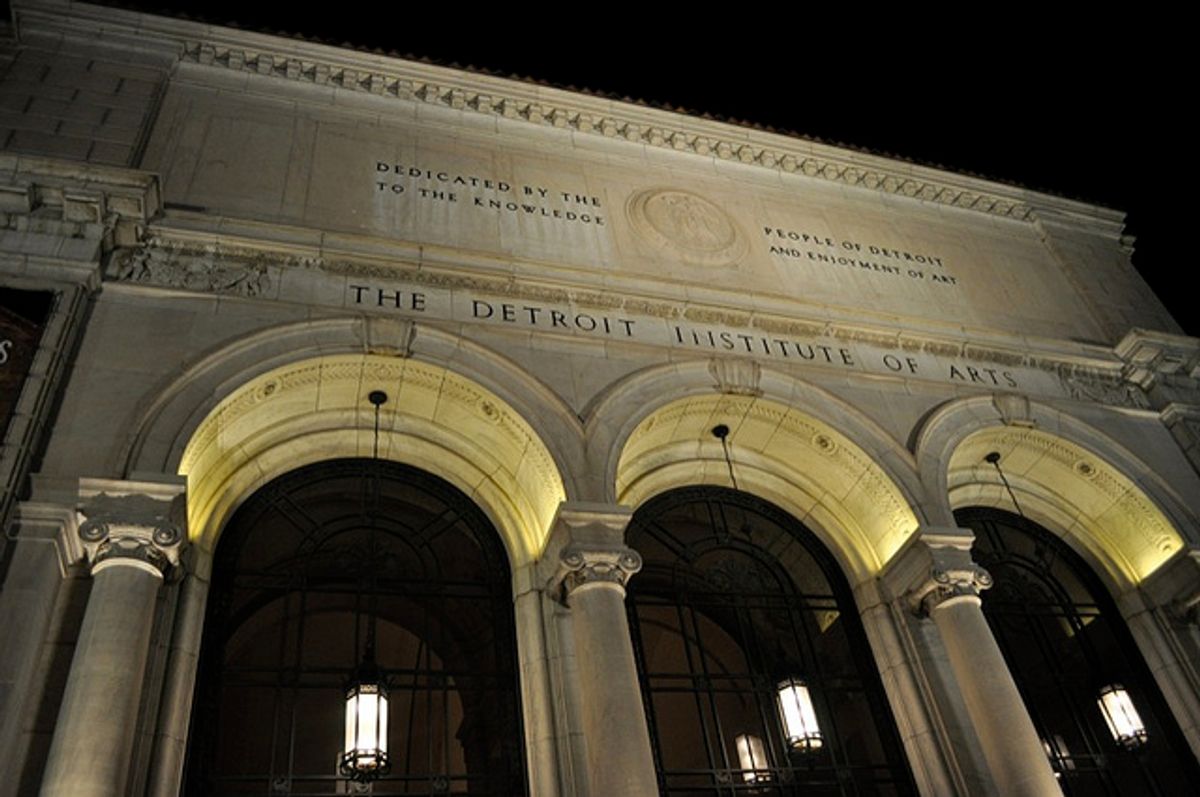 The inscription on the facade of the Detroit Institute of Arts reads, “Dedicated by the people of Detroit to the knowledge and enjoyment of art,” which at this point is starting to sound cruelly ironic. (image via Flickr/glennia)
--

On May 24 the news broke that Detroit’s emergency manager, Kevyn Orr, was considering whether the city could or should sell off the art collection of the Detroit Institute of Arts(DIA) to help pay back its debts. In the roughly week and a half since then, loud reactions have been heard from many corners of the art world, as well as writers in various media outlets and Michigan politicians themselves. The reactions pretty much range from “this is a bad idea” to “this is a terrible idea.”

For his part — and not surprisingly — DIA Director Graham Beal told the New York Times that he didn’t think the museum’s collection really could be sold, since it’s held in the public trust:

“As far as we’re concerned,” Mr. Beal said, “as objects held in the public trust, they actually don’t have a value. I know people find that odd.”

This, of course, was nicely counterbalanced in the article by a statement from Orr’s spokesperson, Bill Nowling, who said:

We have to look at everything on the table. As much as it would pain us to do it — and it does; I’m a great lover of art and so is Kevyn — we’ve got a responsibility to rationalize all the assets of the city and find out what the worth is and what the city holds.

In other words, it may require something more than rational argument to stop a potential sale. So Michigan Republican Senator Randy Richardville has introduced a bill that would attempt to do exactly that, according to USA Today. Senate Bill 401 would add to an existing state law a provision that says, ”An art institute shall adhere to the code of ethics for museums published by the American Alliance of Museums or a successor organization.” American Alliance of Museums guidelines restrict the sale of an institution’s artwork as a means only to raise money to buy more artwork; collection pieces cannot be sold off to pay bills.

The question, however, is whether a state law can override federal bankruptcy law. If the answer is “no,” then the bill, even if it passes, will turn out to be symbolic more than anything else. That said, it’s refreshing to see this kind of rallying in support of the arts from a Republican politician. Richardville gave USA Today this wonderful statement:

Thomas Campbell, the director of the Metropolitan Museum of Art, also showed his support by releasing a statement of his own on the matter, which included these lines:

Even in the darkest days of New York City’s fiscal crisis of 1975, and the national economic meltdown of 2008, the cultural treasures closely identified with our own city were never on the table — never considered an asset that might be cashed in during a crunch to bridge a negative balance sheet.

The Detroit Institute of Arts is one of the greatest art museums in the country that represents the finest creative achievements throughout the history of the world. The DIA is not only a great treasure but one of the very few places in Detroit where all people can enjoy, contemplate and study art and its many related concepts. The DIA has developed itself as a public educational institution and has been a leader in the profession at engaging with all segments of the community. …

We appeal to your higher judgment in assessing the true value of the DIA and its critical role for the public good of the city, state and the country in deliberating on the future of this great collection.

But the harshest, smartest, and most biting words on the situation have come from opinion columns, namely Mark Binelli writing at the New York Times and Nicholas Wapshott at Reuters. In his piece, Binelli swiftly eviscerates the financial-political cabal that has exploited the ailing city rather than help it, and he offers abundant evidence of corruption, from Governor Rick Snyder’s forceful imposition of an emergency manager on Detroit even after voters repealed the law that sanctions the use of emergency managers, to Orr’s hiring of his own law firm to help restructure the city’s debt despite the fact that said law firm represents some of the banks that hold the debt. One of Binelli’s shining moments is this scathing and satirical paragraph (but you should click through and read the entire thing):

Why stop there? Perhaps as part of a settlement, Mr. Orr can negotiate with the Detroit Symphony Orchestra to play at creditors’ annual shareholder luncheons, or work out a deal wherein laid-off autoworkers perform free annual tuneups on the limousines of bank executives. Better yet, he could tear a page from the Chrysler turnaround — which, of course, ended with the company’s being purchased by Fiat. See where I’m going with this? Italians love art, they love cars, and they know how to monetize old ruins!

At Reuters, Wapshott also does an excellent job of calling out Orr and the short-sightedness of the idea, writing:

The man charged with balancing the books says it is premature to talk of selling the art, but claims city creditors, who will be asked to take cents on the dollar in lieu of what is owed them, are bound to demand that all the city’s assets, including the DIA collection, are sold before they will agree terms. Phooey! To send in the appraisers is to invite creditors to demand the sale.

He goes on to point out the problems with a possible sale, including donor stipulations and flooding the market, and mounts the case that even if the liquidation of the collection earns the city some money in the short term, it’s a terrible long-term investment:

Imagine if Greece, with all its financial difficulties, sold off the Acropolis. Or if the Madrid government auctioned the treasures of the Prado. Or Italy pillaged its classical and Renaissance inheritance to fix a temporary lack of funds. It would destroy overnight the tourist trade that provides such a sure source of revenue and would destroy the politicians who dare sign off on such a cheap, shortsighted deal. Even repo woman Angela Merkel, the German chancellor, has not yet suggested plundering the Mediterranean countries’ cultural monuments to gain her pound of flesh.

And that really gets to the heart of it. Selling off an art collection to raise some money (which won’t come near meeting all of the city’s debts) completely misses the point. Discussions of whether or not creative classes and hubs can revitalize entire cities (probably not) miss the point, too. It’s nice to have an economic argument for the arts, but the arts are the arts precisely because they’re not just about economics. Some critics and art-worlders have begun decrying the new art investors as businesspeople who don’t care or think much about the work they’re buying, but maybe the bigger problem we’ve been overlooking is that these are also the people who control our financial institutions, and so increasingly our governments. Wapshott criticizes economists “who too often appear to know the price of everything and the value of nothing”; I’d add to that group assorted businesspeople, financiers, and politicians.

The people of Detroit have been through a hell of a lot. Does we really need to take away their Beaux-Arts museum, their room full of Diego Rivera murals, their Center for African American Art, their Van Eyck and Velazquez and Van Goghs, too?