Pro sport acts like the feds, gets similar results in attempt to eradicate drug use 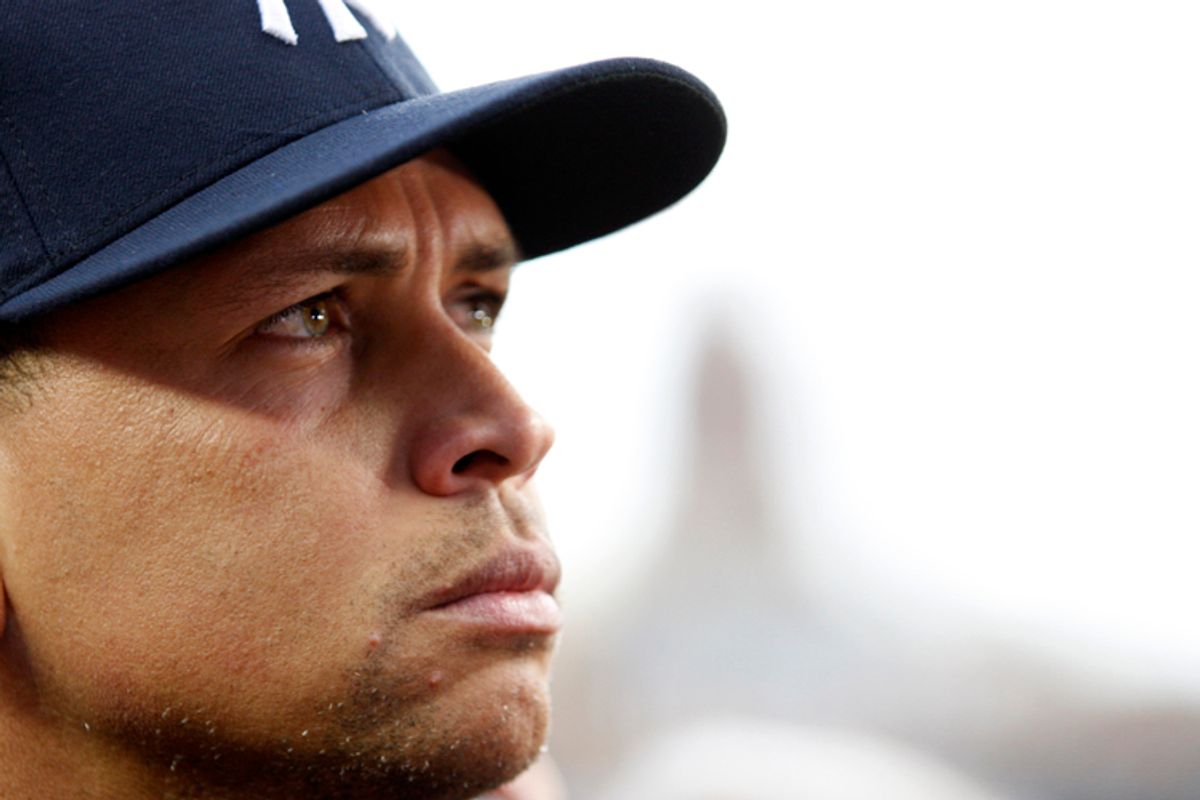 Major League Baseball is going to suspend all its players forever, according to a blockbuster report by ESPN. Or, at least, that is the slightly exaggerated version of the story of how MLB decided to grant a scummy "anti-aging clinic" operator immunity from civil action in exchange for an excuse to suspend 20 current players for, in some cases, 100 games.

Tony Bosch, the clinic's founder and a man for whom there aren't enough synonyms for "shady," is ruined and broke. There's not much doubt that he was selling a great deal of banned substances to a large number of professional athletes. What's unclear is whether the sworn testimony of a longtime liar -- a make-believe doctor who kept handwritten notes detailing his illegal activities for some reason -- is enough to actually suspend 20 players over. Something that's very clear is that MLB approached the investigation, built around a lawsuit against someone the league knew couldn't afford to defend himself against an army of well-paid attorneys, as if it were an arm of the federal government. This, for example, sounds more like an FBI sting than a civil action:

The development is a major break for MLB, which has pursued the case vigorously since Bosch's name was brought to MLB's attention last summer. In exchange for Bosch's full cooperation, sources said, Major League Baseball will drop the lawsuit it filed against Bosch in March; indemnify him for any liability arising from his cooperation; provide personal security for him and even put in a good word with any law enforcement agency that may bring charges against him. Sources said negotiations over the agreement, which lasted several weeks, stalled over the last point, as Bosch wanted the strongest assurances he could get that MLB would help mitigate any prosecution.

At the same time, MLB is trying to secure the cooperation of at least two other former Bosch associates who have spoken to MLB investigators, as well as Juan Carlos Nunez, a registered agent who worked for longtime agents Seth and Sam Levinson, who is believed to have been a conduit between Bosch and numerous players.

The DEA doesn't actually seem particularly interested in this Florida steroid-shilling quack. But now he has the "good word" of Major League Baseball on his side, for whatever that's worth.

The ability of a professional sports league to influence actual criminal prosecutions is ... a bit fuzzy. The criteria for meting out suspensions, though, are clearly laid out in the collective bargaining agreement between MLB and the players association. A player can only be suspended for "just cause," in the contract law sense of the term. The league's Joint Drug Agreement seems to say that players can be suspended for failing tests or being convicted of criminal possession of banned substances. The commissioner thinks if he can prove possession with other evidence, that's just as good.

I am a committed Yankees hater and appreciate Alex Rodriguez primarily as a figure of amusement, but a 100-game suspension based not on failing a test but on the testimony of a sketchy Miami fake doctor seems more like a "tough on crime" P.R. ploy than a serious attempt at eradicating performance-enhancing drugs from America's pastime.

Specifically this seems directed at two players: The aforementioned Rodriguez of the New York Yankees and Ryan Braun of the Milwaukee Brewers. Both players were very specifically highlighted in the ESPN story. MLB will reportedly seek 100-game suspensions against both of them. The league's drug agreement reserves 100-game suspensions for second violations. The league's argument is that lying about associating with Bosch constitutes the second offense. It reads like the actual first "offense" for these two was escaping punishment for prior misdeeds. A-Rod was forced to admit to steroid use in 2009, but he was not suspended and he insisted that he'd stopped using years ago. Braun failed a test, but the MLBPA appealed his suspension and won because his urine sample had been badly mishandled. Both incidents embarrassed baseball, and now baseball is getting them back. (Meanwhile Jeffrey Loria is a free man, but that's baseball/America.)

Because ESPN had the story first, and because ESPN is (it has been credibly argued) more interested in maintaining its lucrative partnerships with leagues and advertisers than it is concerned with traditional standards of journalism, its report is largely free of any critical take on the implications of MLB's decision or the many questions it raises. Notably, no one representing the Major League Baseball Players Association is even quoted. (In another characteristically ESPN move, the fact that the story of Biogenesis and Tony Bosch was first reported in the Miami New Times isn't mentioned at all.)

Basically, Major League Baseball is acting like the federal government. And like that of the federal government, its war on drugs is going quite poorly. Years after BALCO, it looks as if just as many players are using. The league's stricter enforcement has simply led to players getting more creative, and apparently relying on even less reliable sources. (No doubt the Bay Area Laboratory Co-operative had better minds behind it than Biogenesis did.) As with the federal war on drugs, enforcement is draconian and unequal (minor leaguers don't get the protection and defense provided by the MLBPA). It is also occasionally incoherent: Marijuana use subjects players to suspensions and bans, though drunk driving doesn't. There's no concrete evidence that HGH does much for players beyond making them look really cut. At least Major League players have access, unlike your typical subject of the criminal justice system, to the best defense money can buy. (Unions! They are quite handy!)

Eliminating drug use in baseball seems more possible than eliminating it in America as a whole, but it would still require ridiculously stringent and severe enforcement. Some, like the Nation's Dave Zirin, suggest decriminalization and regulation as an alternative. That seems incredibly unlikely to happen, at least any time soon.

If there's one organization that's even better than MLB at acting like the government, it's the government. Thanks to baseball's archaic antitrust exemption, Congress gets to meddle whenever it wants, and it frequently wants to, because regulating baseball is more fun than legislating. The worst possible outcome from all of this won't be 100-game suspensions for nearly two dozen players (unless you're a Brewers fan, obviously), but another round of kangaroo court hearings and idiotic prosecutions, designed around protecting the "sanctity" of a lucrative money-making venture involving adult millionaires (and hundreds of much less well-paid athletes). If, as seems likely, some or even all of these suspensions fail to happen following appeal, we can probably all expect an epic storm of self-righteousness on Capitol Hill.