Crime show "The Fall" is a compendium of contemporary TV cool 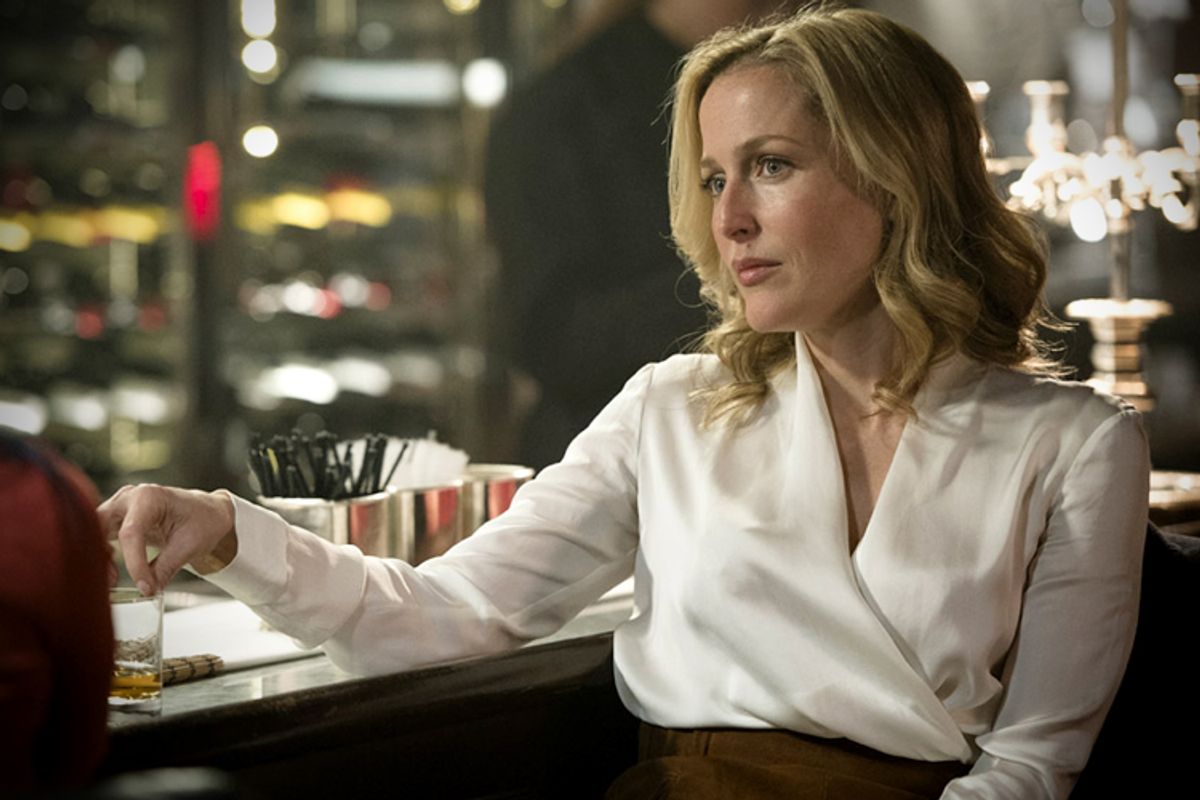 There is a period of time before a cliché becomes a cliché when it is just in good taste. Edison bulbs to bell bottoms, kale salads to crimped hair: Before they were eye-rollingly ubiquitous and firmly associated with a particular moment they were just cool. ‘The Fall,” a five-episode crime series from the BBC that debuted on Netflix last week, is a kind of compendium of contemporary TV cool: tortured serial killer, complex female lead, specific and loaded setting, a slow pace that prioritizes psychology and character over crime solving. (Like so much else, its leading influences are the original "Prime Suspect" and the original "The Killing.") It takes all these tropes and tosses them into a creepy, classy, artful series that is so totally of the now it hardly matters that it’s not quite as good as it could be: It looks and feels like the right thing, the kale salad of crime shows. I ate it all up.

Gillian Anderson, who gets more and more severely attractive with every year, stars as a Detective Stella Gibson, a police officer with the Metropolitan police in London who is brought over to Belfast, Northern Ireland, to review a high-profile murder case that the Belfast police have been unable to solve. That murder, we learn before the police do, was committed by Paul Spector (Jaime Dornan), the hunkiest serial killer of all, a title for which there is currently very stiff competition (James Purefoy, Mads Mikkelsen and so on). Paul is a soft-spoken and devoted father of two, a bereavement counselor with a trim beard. He looks like the platonic ideal of a Williamsburg bartender, but actually spends his time listening to a grieving mother by drawing pictures of her tits. He methodically plans his murders, carefully selecting professional women of the same look and age, breaking into their houses and moving around their underwear, only to return a few days later, slowly strangle them, bathe them, do their laundry, pose them, and take pictures that he will masturbate to later. As Stella reviews the one murder, another obviously linked murder occurs and she heads up the investigation into the serial killings.

The first 10 minutes of “The Fall” show Paul sneaking into the house of a potential victim. I highly recommend watching them in a) broad daylight or b) with someone else in the house because they are almost unbearably suspenseful, while also being somewhat misleading: except for its opening, “The Fall” does not traffic in horror movie thrills, but a consistent eeriness and unease. It’s in thrall to the Danish version of “The Killing,” an atmospheric show in which mood and character matter as much, if not more, than the murders, and the case unravels slowly, circuitously. In just five episodes, another sordid murder case that does not appear to have anything to do with Paul is introduced. We watch Stella go for a swim more than once. We see Paul’s wife, a good, clueless woman and neonatal nurse, care for a young mother. When one of the victims is discovered by her sister, we watch the entire 9-1-1 call from the perspective of the operator, who has to calm the sister down, stay on the phone with her, and then, when it’s over, take another call, this particular calamity being only one of many. Some of these moments are memorable and stark. More are soporific. Both lend themselves to “The Fall’s” tone: These days, slow is what passes for serious.

Anderson’s performance is what makes "The Fall" worth watching. Stella is a hodgepodge of familiar traits — icy, competent, brilliant, fearless, not at all crazy, highly attuned to sexual and gender politics, willing to piss people off — that basically all stem from that other DCI, "Prime Suspect’s" Jane Tennison, though bits and piece can also be seen in the likes of Carrie Mathison and Elizabeth Jennings. But the most original thing about Stella — and she would glare at me for saying so —is her sex life.  In the first episode, Stella drives by a crime scene and sees a very attractive detective working a case. She has her escort pull over, walks up to the detective, introduces herself and brazenly tells him her room number. He shows up a couple of hours later and they have sex. She gives him her number, but she doesn’t want him to call. (We are supposed to see a connection between Stella and Paul here. Stella's sex scene is intercut with Paul bathing one of his victims, the intimation being that they both find control, of different degrees, erotic. It’s a bit of a stretch.)

Due to the vagaries of plot, Stella's willful one night stand ends up coming to the attention of male members of her department. They get judgmental and freak out. “The Fall” gives Stella a number of speeches about their double standards that would be almost unbearably on the nose as delivered by anyone other than Anderson. But she’s so restrained, self-possessed and intimidating, so sexy in a cold way that she can say things like, "Man fucks woman. Man subject. Woman object. That's fine for you. Woman fucks man. Woman subject. Man object. That’s not so comfortable for you, is it?” and you hear the point, not the lecture. Even through a TV screen, it's hard to roll your eyes at Anderson — she might see you and glare and then what would you do? Wish your couch had a trap door?

Anderson's sharpness is especially necessary to counter the softness of Dornan's performance. Refreshingly, the show is not interested in explaining exactly why Paul is a murderer. He had a horrible childhood, but there is no pat explanation for his particular perversity, his interest in women of a certain age and look. The show also avoids the standard conventions about sociopaths. Paul can feel empathy. He loves his children. His crimes are not simply a matter of his having no human feeling. At one point, as happens in these shows, Stella profiles Paul perfectly. She says he’s athletic and cocky, intelligent but undervalued, that he “hates women who occupy powerful positions,” that he is turned on by their terror, that he is “creating his own pornography.” We know she is right, but Dornan puts none of this, other than the musculature, over (to be fair, he has very few lines, just a ton of silent screen time). There’s no cockiness or anger, no burning intelligence, no disdain for women. There is, for a guy who strangles women, barely any creepiness. It's like he's playing the tortured, laconic, secretly vain, puppy-dog-eyed singer in an indie rock band instead of a serial killer.

Be warned that “The Fall,” like both iterations of “The Killing,” does not wrap things up in five episodes. The ending is pure cliffhanger, the one trope the show uses that is so déclassé it already feels clichéd. It will be back for five more episodes next year, at which point, presumably both it and kale salad will still be hip enough to taste pretty good.