The first lady shuts down a protester and triumphs over rudeness 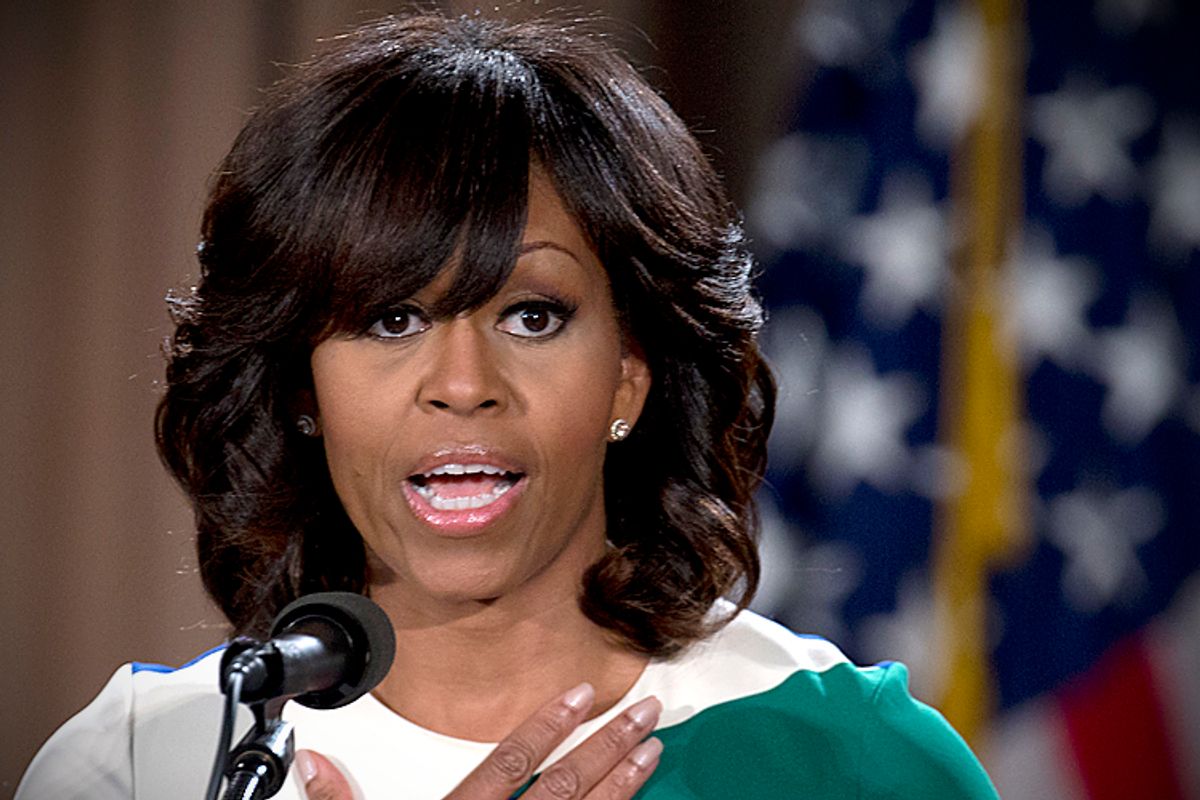 When Michelle Obama declared last summer at the Democratic National Convention that "At the end of the day, my most important title is still 'mom in chief,'" she was not kidding around. Case in point – the impromptu lesson in manners she gave a heckler Tuesday evening.

As the New York Times reports, Mrs. Obama was speaking before a group of approximately 200 supporters at a Democratic fundraiser in a private home in northwest Washington when she was interrupted by a protester. But when the woman, later identified as Ellen Sturtz, a member of the LGBT rights group GetEQUAL, shouted for the president to "issue an executive order barring federal contractors from discriminating against employees based on sexual orientation or gender identity," the first lady wasn't having it. She reportedly left her place at the lectern and moved toward Sturtz, saying, "One of the things I don’t do well is this." And then, quite well, she said, "Listen to me, or you can take the mic, but I’m leaving. You all decide. You have one choice." With that, the crowd began shouting for Mrs. Obama to stay put, and Sturtz was escorted out, still yelling and calling herself "a lesbian looking for federal equality before I die."

For a woman whose etiquette is not always perfection, Michelle Obama's sense of decorum is flawless. And the first lady's response had a firm conviction that's familiar to many parents. It was the determined tone of a woman who, swear to God, will turn this car around RIGHT NOW if you can't control yourselves. I don't know where Sturtz went after her tussle, but I'd have instinctively gone straight to my room.

In a press release today, GetEQUAL quotes Sturtz, who they say "interacted with the First Lady." She explains her actions by saying, "I simply couldn't stay silent any longer." And she did manage to draw attention to the issue. But she did it by being rude and boorish, so where's the satisfaction in that?

The headline-grabbing outburst is a common ploy, one that, it depresses me to say, is far too often used by those of us here on the crunchy left. We can say that dire circumstances call for extreme reactions, but really, all that heckling does is broadcast to the world, "What I feel right this moment is more important than what everybody else in the room paid money to experience." We see it again and again, and never satisfyingly. Last summer, a comedy club patron enticed Daniel Tosh to make some very unfortunate remarks about rape – an event that was set in motion when the woman decided, "I felt that sitting there and saying nothing, or leaving quietly, would have been against my values as a person and as a woman."  In other words, much like Sturtz, she decided that her values should be made known to everyone in the audience, because they were more important than anything anybody else was saying or doing. Certainly more important than what the person the rest of the assembly had paid their money to see was saying and doing.

I believe in vigorous debate and fighting with all the passion we have for the issues that matter. And that is not possible when we are selfish, self-appointed arbiters of what the person in the front of the room with the microphone ought to be talking about. There is plenty to be pissed off about in this world. I'm in the Yes to Equal Rights, No to Rape camp too. I think that Rick Santorum actually looks better covered in a sparkly dusting of glitter. But the moment we play the "I just couldn't help myself " card we shut down meaningful conversation. Yelling at someone is not "interaction." Sure, we get noticed, but it's easy to get noticed. A no-nonsense mom like Michelle Obama could tell you that any 2-year-old in a WalMart can get noticed just by throwing herself on the floor of the sporting goods aisle. That doesn't mean anybody is going to take her seriously.