“The Internship”: A fatal overdose of Googliness 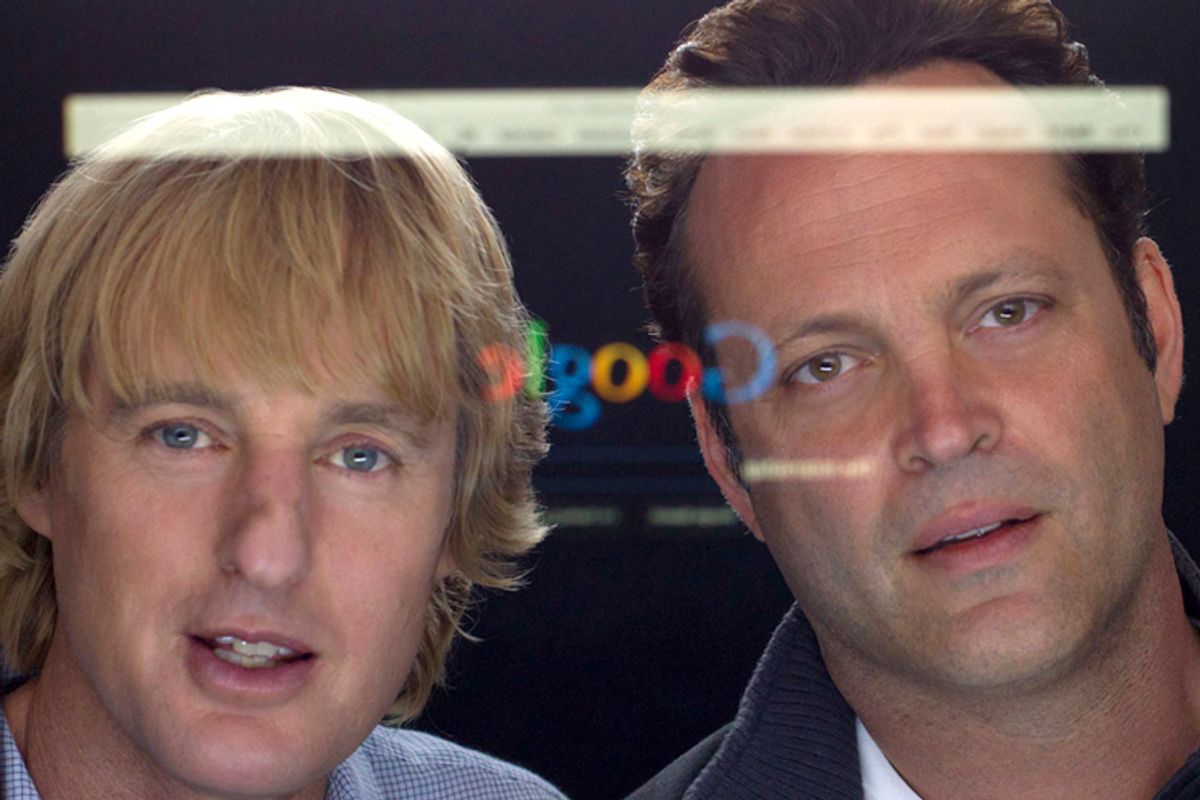 What do you get when you combine the dumbest and most formulaic kind of Hollywood dude comedy with the most smug and self-congratulatory grade of information-economy arrogance? Apparently you get “The Internship,” a two-hour infomercial for one of the world’s biggest technology companies that fronts as a laddish Vince Vaughn-Owen Wilson farce. Unless it should be phrased the other way around, and “The Internship” is better understood as a machine-made conventional comedy that breaches new frontiers in product placement – by branding the entire film with a corporate logo so familiar that you’ve probably seen within the last five minutes.

Either way this movie is stuffed to the brim with “Googliness,” a word that is used several times, in a pseudo-whimsical fashion that’s supposed to make you think it’s not corporate drone-speak. It means something like: Innovative! Or: Nerdy, while also fun and team-spirited! Or: Totally workaholic and subservient, and acclimated to a ruthless Darwinian economy where talented young people are pitted against each other, Hufflepuff vs. Gryffindor style, in a geek-Olympics where they work really hard all summer for no money in the hope of someday, somehow, getting an actual job! So, so much Googliness. What this movie and all its Googliness produces in me is “oogliness,” that feeling well known to tech-company interns on Friday nights where you have to leave one foot on the floor and place a bucket by your head when you go to sleep.

Not only does “The Internship” set a breathtaking new standard in inter-corporate fellatio, it also accomplishes something genuinely unusual by insulting two different target demographics at once. Veteran Hollywood comedy hack Shawn Levy (of the “Night in the Museum” movies and “Date Night,” which by his standards was a masterpiece), working with a screenplay by Vaughn and Jared Stern, portrays the film’s Googly younger generation as a pack of cynical and damaged little pricks, while depicting the 40ish Vaughn and Wilson characters as buffoonish losers unfamiliar with such radical new terminology as “app” or “online” or “coding.” There’s an entire gag about the fact that Google interviewers believe that Billy, Vaughn’s character, has represented himself as knowing the programming language C++, when what he really meant is that in school he got a C-plus in typing class. Comedy gold. And then there’s the extended scene when Billy learns, with ever-increasing Googly-eyed wonder, that the coffee and bagels and pizza and pudding and so on at You Know Where are all free. “Free? Free, as in free?” You know it, dude – free as in just like all that labor you’re performing for the company (oh snap).

What makes “The Internship” especially unfortunate is that there are pieces of a better, funnier movie lying around here, pretty much unnoticed. As always, Owen Wilson is a delightful screen presence, even though his character, Nick, remains almost completely devoid of distinguishing characteristics and his budding romance with Dana (Rose Byrne), an Aussie overworked career-woman type, never amounts to anything more than a nice idea. Perhaps because he helped write and produce the film, Vaughn delivers one of his leanest and most focused performances in recent years, largely free of the paunchy, hollow-eyed belligerence he’s exhibited way too often. Billy is a sweet but lost alpha-male from a bygone era, a glad-handing, boozy salesman whose refusal to dislike anyone is both his strength and his downfall.

It’s just that almost everything that happens to Nick and Billy – who are mistaken for a same-sex couple when they first get to Google; that movie would definitely have been better than this one – is a hackneyed and/or stupid fragment of some marginally superior comedy. They lose their jobs selling watches for John Goodman (in a throwaway role), and Nick signs on to sell mattresses for his sister’s repulsive brother-in-law, played by Will Ferrell with a goatee, a weird Sanskrit tattoo and an unnecessarily public appetite for anal sex. Ferrell’s character is unsettling, but at least suggests some unexpected dark places this movie might go. Instead, once Billy gets the brilliant idea of being the oldest Google internship applicants in history, we go straight into episodic and utterly predictable group-of-misfits comedy.

I know this counts as an outrageous spoiler, but once relocated to the candy-colored and sun-splashed Google campus, Nick and Billy become the linchpins of a deeply uncool team of young interns who discover their total awesomeness. There’s the overly detached hipster with rectangular glasses, the white kid who talks black, the home-schooled Asian genius who needs to break loose and the geek-fetish girl who turns out to be a virgin. And while it’s true that Nick and Billy bring absolutely nothing to the table, information-technology wise, they do possess important life skills when it comes to hitting on strippers and ordering rounds of Jägermeister.

There are a few oddly endearing moments from Vaughn and Wilson along the way, to go with an OK performance from Max Minghella as the Draco Malfoy of Google interns, and an awkward one from the generally reliable Aasif Mandvi. But nothing about Google or its campus or its vaunted corporate culture is ever presented with anything that even touches irony or sarcasm or humor, unless you count the suggestion that, by golly, its senior employees sure do work hard. Mercifully, this movie is so dreadful that it probably won’t pave the way for a zany comedy about BP’s corporate response to the Deepwater Horizon disaster, or Judd Apatow’s goofball farce about the crazy friendship between Jamie Dimon and Vikram Pandit. Anyway those movies just wouldn’t have the same sloshing, gooey kind of Googliness.