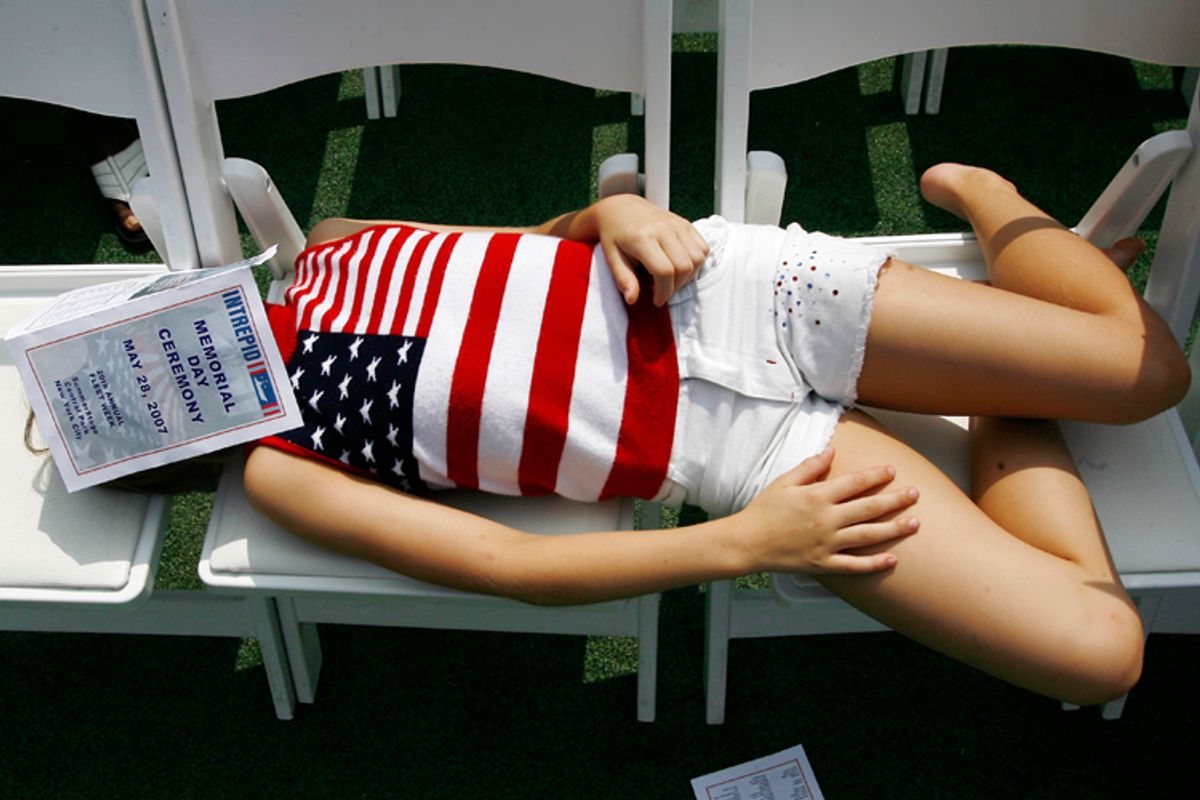 Rachel Maddow spoke for a lot of progressives, as usual, when she admitted on her show Thursday night, about the rolling wave of revelations about NSA’s data-dragnet: "Part of me feels like screaming, part of me feels like we've known this was going on since 2006-2007."

It’s true, we’ve learned a lot about aspects of the vast post-9/11 surveillance state in the last 10 years, and it’s hard to keep track of who knew what when, and what mattered most about each revelation (including these latest). It’s true that George W. Bush took both the Patriot Act and the Foreign Intelligence Surveillance Act and pushed them beyond the boundaries of legality – and then Congress acted, not to rebuke Bush or rein him in, but to make those abuses legal.

But in just the last few days, we’ve learned vastly more. First my former colleague Glenn Greenwald revealed that under court order, Verizon had delivered the phone records of millions of Americans to the NSA. The next day, Greenwald’s Guardian and the Washington Post reported on the NSA’s PRISM, which seemed to allow the agency to tap directly into the servers of major Internet companies, like Microsoft, Yahoo, AOL, Google, Skype and Facebook. Oh and Sprint and AT&T are driving dump trucks of our phone records to the NSA, too. Kidding! They don't need dump trucks!

None of this, though, is illegal. All three branches of government are in on the deal, from Congress, which passed the laws, to the executive, Bush, who used and abused them; back to Congress, which legalized many of the abuses; to a judicial branch that has consistently accepted the broadest possible interpretation of the laws; to the next executive, Barack Obama, who has used the laws aggressively and demanded utter secrecy about them.

Cue some screaming here: Obama promised the most transparent administration; he has run the most secretive, prosecuting more whistle-blowers for national security leaks – six – than all prior presidents put together. And yes, many, maybe all, Congress members knew about these NSA programs, but some who knew have been blowing the whistle – in code, anyway, as old-fashioned whistle-blowing might get them arrested – that the administration’s interpretation of what the law allowed, if widely known, would be beyond what most people believe the law allowed.

The laws haven’t been secret, but the ways the administration interprets and acts on the law long have been. Sens. Jeff Merkley, Mark Udall and Ron Wyden have been trying to tell us this for a long time; they and others, like Illinois Sen. Dick Durbin, say these new revelations ought to force much more accountability on the administration.  (Sen. Dianne Feinstein, by contrast, defends it all on the grounds that it’s “kept us safe,” and Lindsey Graham is proud to have Verizon sharing his phone records with the government.)

Now that these details aren’t secret anymore, Americans, including progressives, are trying to decide how outraged to be. I found myself thinking about Brown University's Michael Tesler's research, which I reported here, showing that liberal Obama supporters disapprove of certain national security policies like targeted assassination -- until they learn Obama supports them, and then they're fine with it.  Is Obama neutralizing a liberal constituency that might be expected to protest some of these national security excesses, because they trust him? I hope they like all these policies as much under President Ted Cruz.

And I can’t tell you how many times I saw devoted Obama supporters, some of them my friends, say something on Twitter Thursday to the effect of “if you’re not doing anything wrong, you have nothing to worry about”; which is exactly how police officers defend controversial policies like “stop and frisk” or aggressive surveillance of high-crime neighborhoods. Lots of people apparently don’t care if the NSA knows how often they call their mom or order pizza, either. Yuk yuk. Anyway, “no one is listening to your phone calls,” Obama himself assured us in a statement Friday, or wiretapping; they’re just connecting “metadata.” (Oh, and PRISM doesn't target Americans, the president also claimed.)

Of course, the brilliant Jane Mayer explained exactly “what’s the matter with metadata,” and the many patterns of activity they reveal about all of us, in the New Yorker. Interviewing Susan Landau, author of the chilling “Surveillance or Security,” Mayer reported:

In the world of business, a pattern of phone calls from key executives can reveal impending corporate takeovers. Personal phone calls can also reveal sensitive medical information: “You can see a call to a gynecologist, and then a call to an oncologist, and then a call to close family members.” Such information from cell-phone towers can reveal the caller’s location…. Such data can reveal, too, who is romantically involved with whom, by tracking the locations of cell phones at night.

…Metadata, [Landau] pointed out, can be so revelatory about whom reporters talk to in order to get sensitive stories that it can make more traditional tools in leak investigations, like search warrants and subpoenas, look quaint. “You can see the sources,” she said. When the F.B.I. obtains such records from news agencies, the Attorney General is required to sign off on each invasion of privacy. When the N.S.A. sweeps up millions of records a minute, it’s unclear if any such brakes are applied.

I don’t think Barack Obama cares about my visits to the gynecologist, or that the NSA is keeping data on your affair with that married politician, or John Boehner’s calls ordering another merlot delivery from that place near his home in Washington, D.C.  I really don’t. But do we really trust that none of these “patterns” of metadata that expose our private lives will ever become public? That someone won’t mine our metadata for their own purposes, as long as such vast swaths of it are being stored? The scurrillous investigations into the private lives of Rev. Martin Luther King Jr. and John F. Kennedy began with national security concerns, and ended in the disclosure of embarrassing personal information -- in the case of King, designed to shame his wife and drive him to suicide. Meanwhile, as Mayer notes, the latest revelations make you wonder why they bothered to use “quaint” measures like search warrants and subpoenas to get records from AP and Fox News’ James Rosen: These kinds of dragnets must make keeping tabs on the media so much easier than when Richard Nixon was trying.

I’m with Maddow in that I’ve spent a few days trying to figure out how much to scream about all of this. On Thursday night the National Journal released a poll showing that 85 percent of those surveyed believed it was “likely” that their "communications history, like phone calls, e-mails, and Internet use," was "available for businesses, government, individuals, and other groups to access without your consent." The steady drip, drip, drip of detail about our ever-expanding national security state has led all of us to protect ourselves a little with a kind of tired cynicism about it.

And I think there's more to the indifference, even by a lot of liberals, to this latest news than just "it's OK when our guy does it." Partly, we blame ourselves. Probably every one of us has thought from time to time about how exposed we all are, from our cellphones to email to the Internet "cloud" to all of social media -- and then we go about our business using all of it because it's all so damn awesome. And so, on some level, we feel partly culpable. We always knew, or suspected, all of this was possible -- and went on doing it anyway.

We know our cellphone signal lets us be tracked, which sometimes seems creepy, but seems excellent when you can activate “Find My Phone” to locate your iPhone in the cab where you dropped it last night, or find the best Japanese restaurant near your current location on Yelp. We all scream when Facebook changes its privacy settings without notice – but very few of us close our accounts in protest. We are tweeting our outrage from our Sprint smartphones, Googling to find out whether Sen. Obama really flip-flopped and voted to authorize the way the Bush administration was using FISA in 2008 (he did), then G-chatting with our editors about when we’re filing our stories on all of it.

There’s a strong Calvinist impulse in the American psyche: So often, Americans blame themselves for their troubles. If I worked harder, maybe I wouldn’t have lost my job. I should have stayed in school. If I hadn’t gotten so drunk, I wouldn’t have been date-raped. If I wasn’t strutting all over social media like a strumpet, and so tied to my iPhone, addicted to my email, they wouldn’t have so much data on me. We shouldn’t have walked down that dark data alley; it’s not like we weren’t warned.