Can Christians get along with America?

Bakery owners and a high school valedictorian take a stand for religion, in very different ways. But what's right? 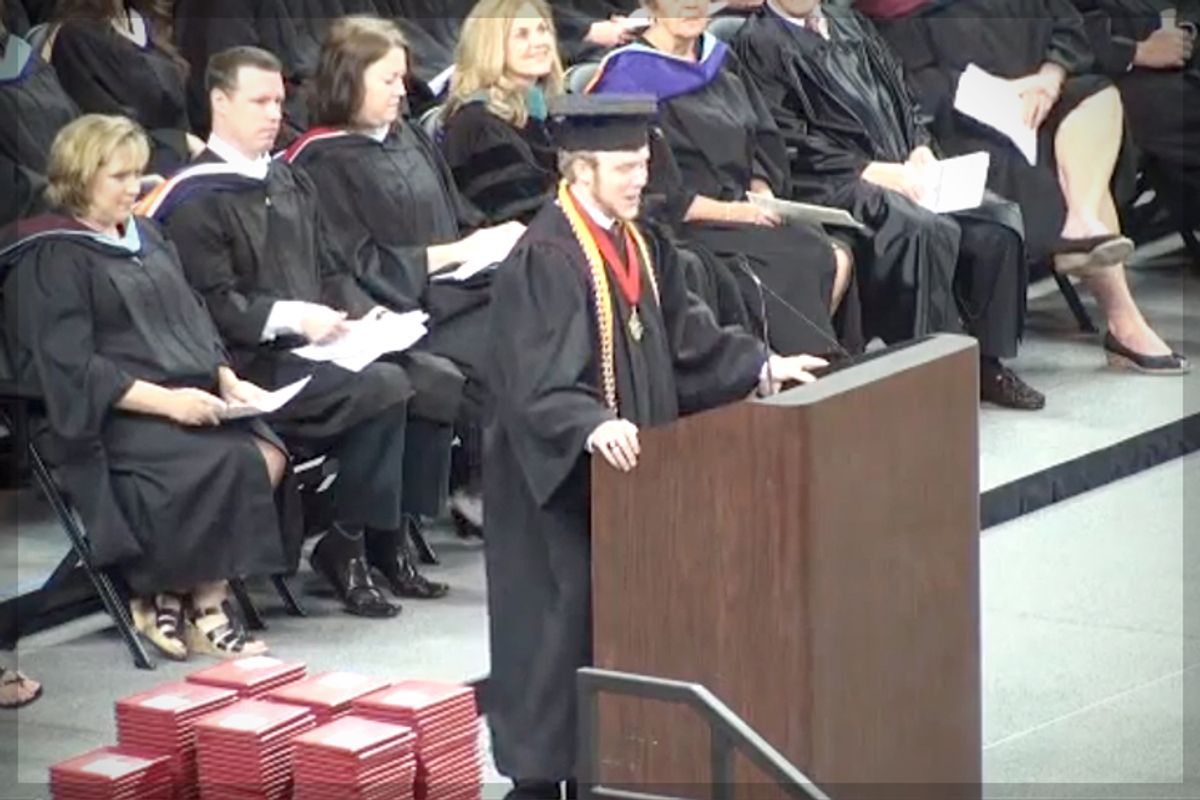 Let's start with the cake. This week, the Colorado ACLU filed a discrimination suit against Lakewood, Colo.'s Masterpiece Cakeshop after the owners refused last year to make a cake for same-sex couple Dave Mullin and Charlie Craig. The ACLU says it has affidavits from two other gay couples who have been likewise refused wedding cakes from Masterpiece.

At the time of Mullin and Craig's thwarted order, owner Jack Phillips told CBS News, "If gays come in and want to order birthday cakes or any cakes for any occasion, graduations, or whatever, I have no prejudice against that whatsoever. It's just the wedding cake, not the people, not their lifestyle." But it doesn't much help Masterpiece's credibility that its owner allegedly didn't blink when recently asked to make a cake for a dog wedding.

The Colorado case isn't isolated, either. Earlier this year, the owners of the Sweet Cakes bakery in Gresham, Oregon walked pretty far back on their stated promise of cakes for "ANY occasion" when they declined to make a wedding cake for a lesbian couple. The women also claimed that owner Aaron Klein told them they were "abominations to the Lord." The bakery then came under investigation by the Oregon attorney general's civil enforcement officers for potentially violating the Oregon Equality Act of 2007, which prohibits discrimination on the basis of sexual orientation or gender identity. But more damning was the sudden appearance of single-star reviews on Yelp for both their "bigoted behavior" and their "dry and tasteless" cakes.

With more states moving forward on marriage equality, these kinds of cases are inevitably going to become a litmus test of  the conflict between commerce and religious beliefs. And what's right is not always clear-cut. If you don't want to make a cake celebrating the union of two people who love each other and want to spend a life together just because they're the same sex, that's just really sad and limited. Cake should be an instrument of joy, not division. But the idea that someone could be forced to participate in something that he or she doesn't believe in doesn't exactly sound like the greatest way to move the cause of tolerance forward either.

Mark Silverstein, the Colorado ACLU's legal director, told the Associated Press Thursday, "We are all entitled to our religious beliefs and we fight for that. But someone's personal religious beliefs don't justify breaking the law." What would Silverstein make, then, of brand new high school graduate Roy Costner IV? In full defiance of the separation of church and state, the valedictorian of South Carolina's Liberty High School got up before his classmates Saturday with a school-approved speech in his hand. Then he ripped it up and said, "One thing I am certain of is we’re all a sum of our experiences, both good and bad. All in all, those experiences, the people who mentored us, that we look up to, they have helped carve and mold us into the young adults that we are today. I’m so thankful that both of my parents led me to the Lord at a young age." And he launched into the Lord's Prayer.

Costner's small town of Liberty has in recent months attracted the attention of the Freedom From Religion Foundation, which has fought to keep prayer out of its public schools. As CNN reports, "This spring, the foundation’s staff attorney sent a lawyer representing the district a letter about complaints of alleged discriminatory hiring and religious promotion in another county high school and praise music being played in an elementary school classroom." And after Costner's expression of where he stands on the matter, the Foundation's co-president Annie Laurie Gaylor described his "clearly unconstitutional" actions as "aggressive" and "extremely rude." But a district spokesman said there would no repercussions for the young man, adding, "The bottom line is we're not going to punish students for expressing their religious faiths."

One has to wonder whether that open-mindedness would have extended to a student who was expressing a non-Christian religious faith, or a declaration of non-belief entirely. And given the current state of American public education, you've got to question whether the smartest kid in his graduating class has any idea what he's talking about when he naively declares, "Taking prayer out of schools is the worst thing we could do."

Frankly, I don't believe Christians are so terribly silenced in our culture that they can't follow the directive to cool it for a few minutes in a public place. And Costner's act was a little bratty, no doubt. But he took his moment in the spotlight to take a stand for something he believes. He didn't say that anybody else had to pray along. That's the difference.

We all have choices, and many of those choices involve how we are going to get along with each other. Every time a football player thanks Jesus, are we going to get personally offended, or let it slide? If some small-minded confectioner doesn't believe two men or two women should be married, should we force him to do our baking bidding anyway -- or just make it plain that we're taking our business somewhere more welcoming? Yes, we need to continually fight for the freedom from theocracy, especially as more and more of us are declaring ourselves unaffiliated with any faith. We need to be welcoming of different ideals. But we also need to express our own views in ways that live and let live. Boycott a business. Write a scathing Yelp review. Remind people that not everybody thanks the Lord. And then move on. Be the tolerance we want extended towards ourselves. And recognize the difference between practicing a belief and forcing it on others.