Welcome to the age of Bush-Obama 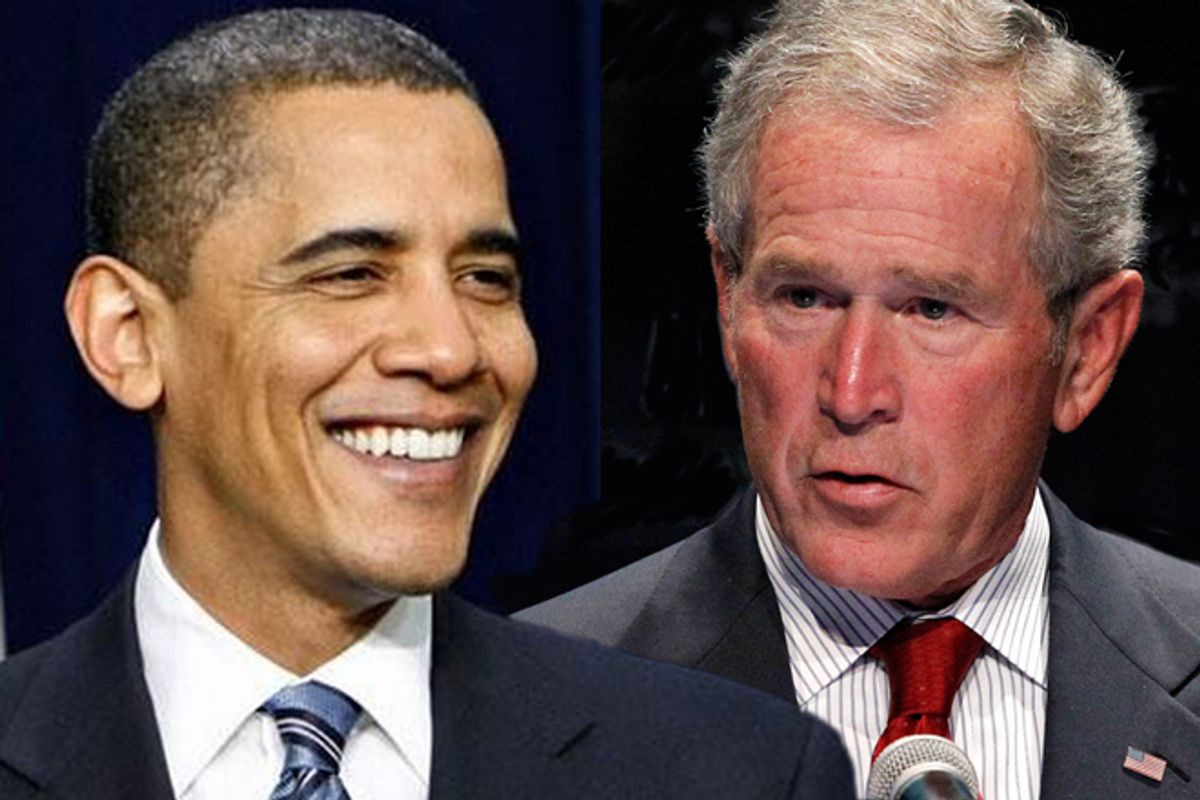 BUZZARDS BAY, Mass. — The sensational disclosure that the US government’s National Security Agency has been scooping up phone and internet records of millions of Americans might have surprised ordinary citizens in Topeka or Milwaukee, but it did little to excite politicians in Washington, DC.

“As far as I know, this is the exact three-month renewal of what has been the case for the past seven years,” Sen. Dianne Feinstein, D-Calif, said of the news about Verizon telephone and mobile log monitoring.

In an uncommon show of bipartisanship, Georgia Republican Sen. Saxby Chambliss supported Feinstein, his colleague on the Senate Intelligence Committee.

“Let me just emphasize, this is nothing particularly new,” he said. “Every member of the United States Senate has been advised of this. To my knowledge, we have not had any citizen who has registered a complaint relative to the gathering of this information.” (The full text is available here.)

It’s hardly surprising that the citizenry has been complacent on this issue — no one knew about the gathering of what is called “telephony metadata” until Wednesday’s major scoop by the UK’s Guardian newspaper.

By late Thursday, this story of domestic surveillance had expanded to engulf the internet. The NSA and the FBI have been tapping into nine leading US internet companies for a slew of communications records, The Washington Post reported.

The agencies were collecting video, photos, emails and other correspondence types "directly from the servers of these US service providers: Microsoft, Yahoo, Google, Facebook, PalTalk, AOL, Skype, YouTube, Apple,” the Post said, citing a top-secret document.

Several companies, including Apple and Google, insisted that they had no knowledge of the program, named PRISM.

The new revelations "raise profound questions about privacy" because of what they say about how such information will be collected in the future, NPR's Dina Temple-Raston said on NPR’s "Morning Edition" Friday.

The controversy will undoubtedly deepen concerns about the instrusion of Big Government into citizens’ lives. The major problem, with the phone records grab as well as the wholesale mining of internet data, is the lack of transparency about the entire process.

The order, in part, directs Verizon Business Network Services to provide “on an ongoing daily basis … an electronic copy of the following tangible things: all call detail records or ‘telephony metadata’ created by Verizon for communications (i) between the United States and abroad; or (ii) wholly within the United States, including local telephone calls.”

The order, as the senators pointed out, is not a departure from common practice. The Patriot Act, issued shortly after the Sept. 11 attacks in the United States, granted sweeping powers to US law enforcement officials to “deter and punish terrorist acts in the United States and around the world.”

But many had thought, or at least hoped, that the administration of President Barack Obama was willing to curtail some of the broader authority the government had seized in the heat of the global war on terror.

Obama himself said as much in his recent speech at the National Defense University.

In the wake of 9/11, the president said, “We strengthened our defenses … giving law enforcement new tools to prevent terror. Most of these changes were sound. … But some, like expanded surveillance, raised difficult questions about the balance we strike between our interests in security and our values of privacy. And in some cases, I believe we compromised our basic values.”

Today, however, White House officials insisted that the efforts to collect “metadata” were legal and warranted.

A senior administration official was quoted as saying that the information the NSA gathered is “a critical tool in protecting the nation from terrorist threats to the United States, as it allows counter-terrorism personnel to discover whether known or suspected terrorists have been in contact with other persons who may be engaged in terrorist activities, particularly people located inside the United States.”

In fact, according to House Intelligence Committee Chairman Mike Rogers, R-Mich., the NSA program helped thwart a “significant case” of terrorism in the United States “within the last few years.” He declined to provide details, but said that his committee was “working on trying to get this declassified in a way that we can provide more information.”

The “metadata” referred to do not include the content of any phone calls. They’re logs of the phone number of every caller and recipient; the unique serial number of the phones involved; the time and duration of each phone call; and potentially the location of each of the participants when the call happened.

“From a civil liberties perspective, the program could hardly be any more alarming. It’s a program in which some untold number of innocent people have been put under the constant surveillance of government agents,” Jameel Jaffer, the American Civil Liberties Union's deputy legal director, said in a statement.

Some politicians on both sides of the aisle also objected.

Sen. Jeff Merkley, D-Ore., denounced the move as an "outrageous breach of Americans' privacy" in a statement on Thursday, while Sen. Rand Paul, R-Ky., termed it "an astounding assault on the Constitution."

NSA whistleblowers Thomas Drake and William Binney have also been sounding the alarm. In an interview with Pacifica Radio show “Democracy Now” on Thursday, Drake took the media to task.

“Where has the mainstream media been? This is routine. These are routine orders. This is nothing new. What’s new is we’re actually seeing an actual order. And people are somehow surprised by it,” he said.

”There’s no need now to call this the Foreign Intelligence Surveillance Court. Let’s just call it the surveillance court. It’s become institutionalized in this country, in the greatest of secrecy, for the government to classify, conceal not only the facts of the surveillance, but also the secret laws that are supporting surveillance.”

Binney, who worked for nearly 40 years at the NSA and resigned shortly after the 9/11 attacks, agreed.

Verizon — one of America’s largest phone, mobile and internet service providers — was not unique, he emphasized.

"NSA has been doing all this stuff all along, and it’s been all the companies, not just one,” Binney said. “If Verizon got [a directive from FISC], so did everybody else.”

Considering the Obama administration’s well-documented tendency to go after leakers, many are expecting some blowback from the White House; Pete Williams, a reporter covering the story for NBC, said as much on “Morning Joe” Thursday.

“I was told last night: ‘Definitely there will be a leak investigation,’” he said.

However, a senior administration official told The Huffington Post Thursday morning that it's premature to suggest a probe is certain to take place.

“There’s been no referral yet from the intelligence community,” the official said.

Glenn Greenwald, the American journalist and lawyer who broke the story for the Guardian, sounds ready.

Dear DOJ: your bullying tactics will scare some sources, but they embolden others, who realize what USG is becominghuffingtonpost.com/2013/06/06/doj…

The news is giving the beleaguered Obama administration yet another black eye.

The White House has been fighting battles on several fronts recently: the ongoing sniping over the administration’s reaction to the Benghazi attacks in Libya last September; the still developing IRS scandal, in which the tax body targeted conservative groups for additional scrutiny; the massive subpoena of Associated Press phone records and the naming of Fox News journalist James Rosen as a possible “co-conspirator” in leak probes.

It is also eroding any lingering impression that what many considered the bad old days of President George W. Bush were gone for good.

“Welcome to the era of Bush-Obama, a 16-year span of US history that will be remembered for an unprecedented erosion of civil liberties and a disregard for transparency,” the National Journal’s Ron Fournier wrote. “The United States could have skipped the 2008 election. It made little difference.”