Could we maybe get some actual civil libertarians on the Beltway's favorite talk shows? 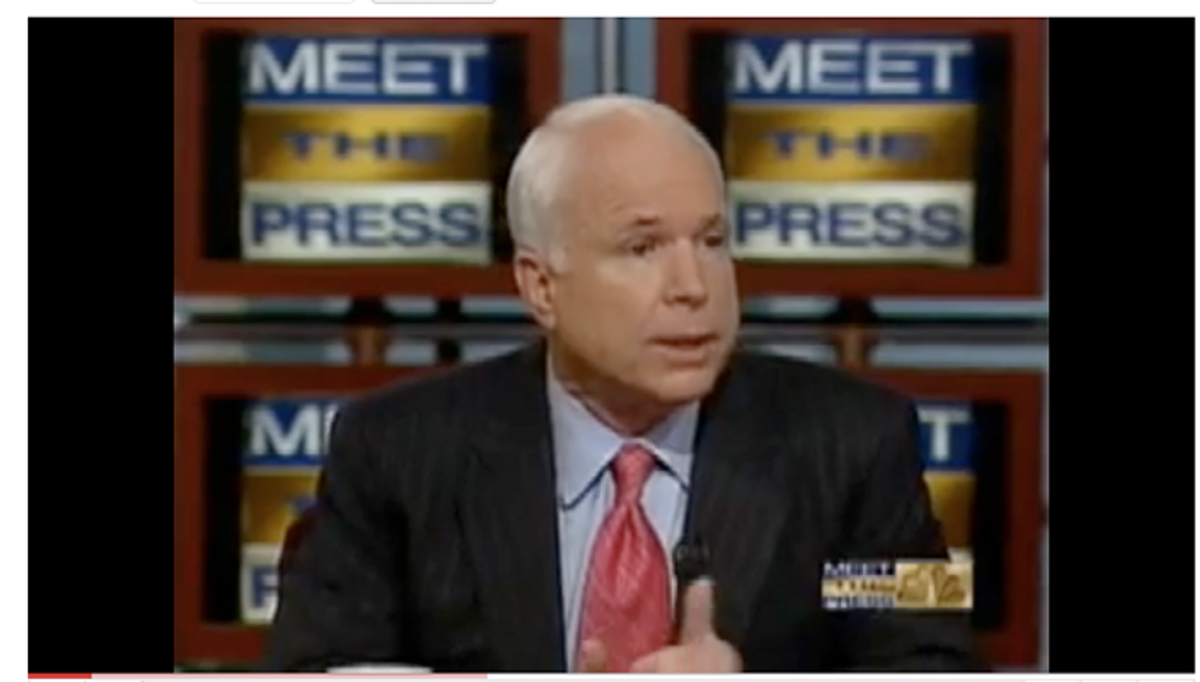 John McCain on Meet the Press
--

"What a funny joke," I thought. I mean, the bookers probably don't even have phone numbers for Sens. Ron Wyden and Mark Udall! When are those two on TV? It could take ages to look that kind of thing up. And McCain is probably already in the green room, right now, waiting for Sunday morning. (Though hopefully he's not at the NBC green room, as "Meet the Press" is being preempted by tennis this weekend.)

Sen. McCain is on one of the Sunday news talk shows nearly every weekend. (Graham is often on one of the others.) This happens despite McCain not having any important leadership position or even expertise on any particular topic. McCain fancies himself one of America's foremost foreign policy experts, but he is actually just a belligerent hawk. Neither he nor Graham is actually on the Senate Intelligence Committee. They just love cameras and bombs.

The problem isn't just those two: It's the entire rotating stable of camera-seeking elected officials and predictable talking heads, a majority of whom are white and conservative. The guests who aren't partisan are Beltway centrists, more concerned with politics than policy.

Perhaps instead of the same pundits and columnists and former or current "strategists" who are on every week, the panels could feature actual experts from the ACLU and the Electronic Frontier Foundation -- you know, people who have been studying and thinking about this exact issue for years. Maybe actual national security and intelligence reporters are available? Instead of Peggy Noonan and George Will, we could get Marc Ambinder, or Walter Pincus, to name two reporters who are well within the media and political mainstream and extremely well-sourced. They're not kooky radicals, even! They're both generally inclined to sympathize with the government's point of view on intelligence matters. They can help us "ease into" this crazy expansion of represented viewpoints thing. The indispensable Jane Mayer could be next. We can work our way up to Julian Sanchez.

Instead of Donna Brazile and David Plouffe representing "the left," we could get, I dunno, Russ Feingold, the former senator who was the only vote against the Patriot Act in the Senate in 2001? Also let's just not have Karl Rove on. Or Ari Fleischer. Or, crazy thought, any totally disreputable former Bush administration official.

The thing is, it's actually not that hard to put together a slightly smarter and wildly more diverse panel of guests. Maddow and Hayes do it. Jake Tapper is, impressively, doing it daily on CNN. (On CNN!)

The flaw in this plan, though, to have experts and activists on instead of tired hacks and John McCain, is that our Sunday show hosts are not qualified to ask these people questions. Gregory will be off this week, but when he comes back can you imagine him trying to ask Ron Wyden about civil liberties? Without steering the discussion to the midterms or entitlement spending or something? Someone will have to explain to Bob Scheiffer what "metadata" and "Dropbox" are. George Stephanopoulos might be able to get a couple halfway intelligence questions off but he also doesn't care. When he had Dan Pfeiffer on last month, he asked him about Benghazi, and the IRS, and didn't bring up the Justice Department's Associated Press investigation at all.

Alas, fixing the Sunday shows is going to take more than booking the same dozen people. But it would be a decent start. If you book a Sunday show and you've already called John McCain, bump him, for America's sake.

(Obviously you should just watch Steve's show instead.)