Down with free parking! 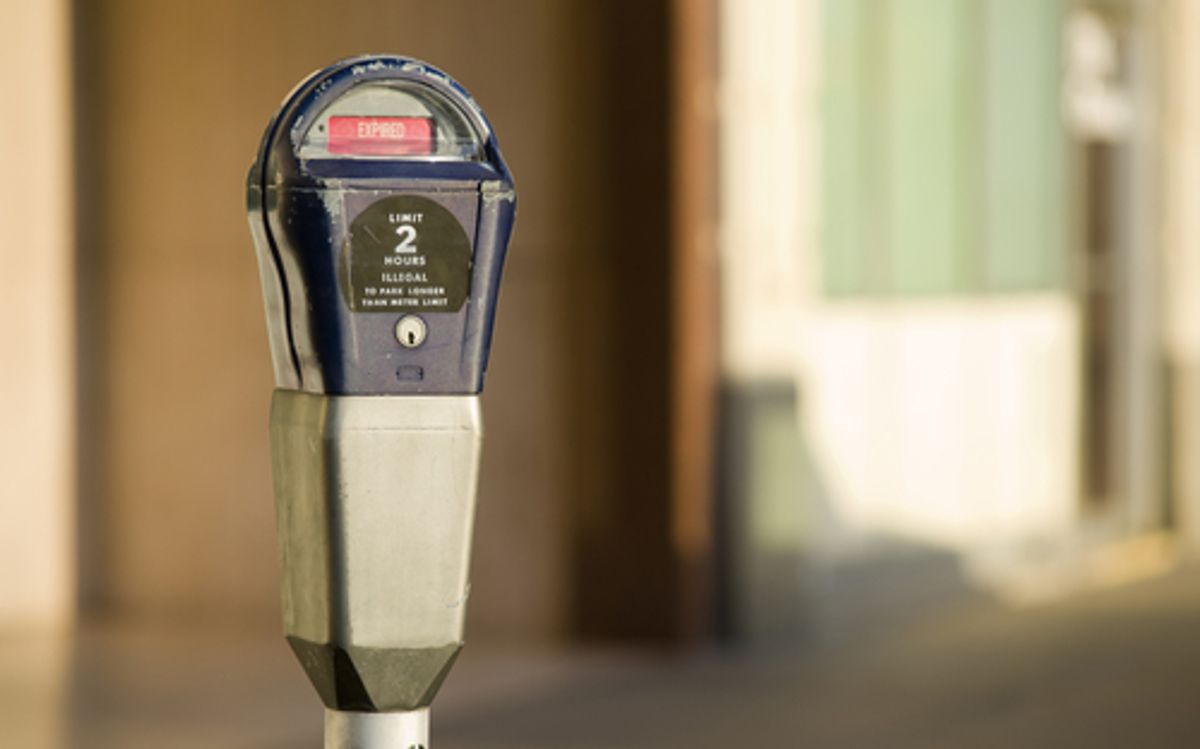 In the multi-level parking garage that sits directly across the street from where I’m typing these words, in the heart of Manhattan’s business-filled Flatiron District, an hour of parking will set you back $27.03. I’m told by the friendly attendant there that he almost always has spaces available. Still, if you’re willing to drive around for a while and hunt for a hard-to-find metered spot on the street, you might be able to zoom your way into one just as its previous occupant is zooming out of it.

To celebrate your accomplishment, you really should treat yourself to lunch. I’d recommend the house-ground wagyu beef cheeseburger with triple crème Brie and caramelized onion aioli at Alison Eighteen, a nearby restaurant -- though at $17, it doesn’t come cheap. Still, with the amount of money you just saved by parking at a $3.50-per-hour spot on the street, you’ll have no trouble covering the lunch bill. And while you’re savoring your $23.53 in savings, as well as the last of your “frites” (they don’t call them “fries” when you’re paying this much for them), ponder this question: What, do you suppose, is the “fair market value” of a one-hour parking spot in this part of town?

Well, you might say, it’s apples and oranges. In the one instance, you’re paying a premium for the supreme convenience of not having to drive around and hunt. In the other instance, you’re being rewarded for your doggedness and independence (or maybe just your frugality) with an hourly rate that’s far more in keeping with the budgets of most working-class and middle-class New Yorkers.

Nevertheless, 87 percent still seems like a pretty dramatic price differential, don’t you think? If forced to give an answer, would you say that the fair market value for an hour of parking in the Flatiron District is smack in the middle of these two hourly rates? Closer to the private garage’s rate? Closer to what the city charges at one of its curbside meters?

These are the kinds of questions that fascinate Donald Shoup, a professor of urban planning at UCLA and someone whom many consider to be the Albert Einstein, Steve Jobs, and John Maynard Keynes -- all rolled up into one -- of what might be called “parking theory.” Shoup’s area of academic specialty is one that doesn’t strike most people, at first, as intrinsically fascinating. But as even a brief visit to the Facebook page maintained by members of his sizeable cult following (aka “the Shoupistas”) will attest, the act of searching for parking is much more than the quotidian, if often deeply frustrating, task we think of it as being.

In the eyes of Shoup and his adherents, searching for parking is nothing less than a microcosm of human economic activity itself, replete with all the weird paradoxes and psychological underpinnings that guide us as we make our way through the marketplace. And just as our individual participation in complex economic systems can be quantified, analyzed, and expressed in the form of revolution-sparking theories, so, too, can our monomaniacal willingness to cruise a mini-grid of city blocks for 15 minutes in search of a totally sweet parking spot. (C’mon, admit it: you’ve done it, too.)

Appropriately enough, Shoup and his growing band of parking revolutionaries are doing what they can to overthrow the old regime, and force cities and citizens to rethink the impact that parking policy has on our communities. In his 2005 book, The High Cost of Free Parking, as well as in various articles and interviews, Shoup has amply illustrated how the lure of free or low-priced on-street parking relative to much more expensive parking in a lot or garage slows traffic, puts stress on local business, and harms the environment. “The combination of low prices for curb parking and high prices for off-street parking increases the incentive to cruise,” he has written.

Take Boston, for example. When the city imposed a limit on new off-street parking lots and garages in 1978, it figured that the result would be less traffic congestion as drivers of single passenger automobiles -- discouraged from paying higher rates for the suddenly scarce commodity of an off-street parking space -- would either carpool or take mass transit instead. But whatever benefits Boston may have incurred were nullified by the city’s insanely low meter-parking rates, which were kept at just $1 an hour until 2011, when they were raised to $1.25.

As Shoup (along with two generations of traffic-weary Bostonians) has observed, Boston’s approach led, in fact, to an unexpected and unwelcome result: congestion on paths to the city became lighter, but congestion in the city became noticeably worse, as drivers cruised endlessly through neighborhoods in search of one of those super-cheap curbside spots. “Everyone would criticize off-street parking operators if long lines of cars regularly spilled into the streets and snarled trafﬁc because the lots and garages were always full,” he wrote. “Cities create the same result with underpriced curb parking, but the cruising cars are hidden in the general trafﬁc ﬂow.”

In one 15-block commercial district that he studied in Los Angeles, Shoup estimated that drivers trolling for a cheap or free curbside spot were responsible for an extra 950,000 vehicle miles driven per year -- “equivalent to 38 trips around the earth, or four trips to the moon.” Although the average search may have taken only a few minutes and covered only half a mile, the aggregate impact that all these rationally self-interested economic actors were having on energy consumption and climate was staggering: together they burned an extra 47,000 gallons of gasoline, and released an extra 730 tons of carbon dioxide into the earth’s atmosphere, over the course of a single year.All in one relatively small commercial area. Feel free to extrapolate, if you think you can stomach the implications.

“When drivers compare the prices of parking at the curb or in a garage, they usually decide the price of garage parking is too high,” Shoup has written. Actually, he maintains, “the price of curb parking is too low.” It turns out that the answer to the puzzling question posed earlier -- What’s the fair market value of a one-hour parking spot in the Flatiron District of Manhattan? -- can and should be determined by using the same method we use to determine most other fair market values: carefully observed trial-and-error pricing. Specifically, Shoup advises, cities should keep raising the price of a curbside parking spot until occupancy along a city block is at 85 percent, which translates to about one out of every eight or so spaces. Price each space high enough, in other words, to ensure that someone who can’t afford to pay any more money for it has just given it up, or is just about to.

Some cities have accepted the challenge, and are gamely experimenting with new demand-responsive pricing schemes in an effort to reduce cruising and open up more spaces. In San Francisco, a quarter of the city’s 28,000 electronic parking meters are part of a new pilot program that’s based on this just-right “Goldilocks Principle” of pricing. Okay with parking in Nowheresville? You might get away with paying as little as 25 cents an hour. Want to walk from your car to the Giants game? You might pay as much as $7 an hour. Rates can vary by block, time of day, and day of the week -- but are never raised more than 50 cents or lowered by a quarter at a single time, and never more than once per month.

In addition, the program’s administrators have made it easy for drivers in search of parking spots to use their smart phones check on availability in certain neighborhoods, steering them away from the most congested ones and toward the least congested ones. But even while San Francisco experiments, other cities can’t seem to break free of older models. In Chicago, Mayor Rahm Emanuel has proposed making street parking free on Sundays in exchange for having Chicagoans pay slightly more during other times of the week. But aldermen on the city’s North Side don’t like the idea: they worry that free Sunday parking in their retail- and restaurant-rich urban neighborhoods will be a business killer, since many business owners rely on the steady turnover that metered parking -- set at the right price, it goes without saying -- encourages.

Shoup has studied the issue long enough to know which way things are likely to turn out; you can probably guess what his prediction is regarding the effect of free Sunday parking on merchants’ and restaurateurs’ bottom lines. (Here’s a hint: “Free curb parking in a congested city gives a small, temporary beneﬁt to a few drivers who happen to be lucky on a particular day, but it imposes large social costs on everyone else every day.”) It’s just another way of pointing out, as Shoup often does, that there’s really no such thing as free parking. When we as individuals pay nothing (or next to nothing) for it, parking becomes what economists call a “negative externality,” where the public cost of a particular item or service actually exceeds its private cost. “If you don’t pay for parking your car, somebody else has to pay for it,” Shoup has said. “And that somebody is everybody.”

An empty parking spot on the street appears, at first, to be an absence: a tantalizing, car-length volume of negative space. In fact, though, an empty parking spot is one of the most valuable commodities over which a city has any control. Wise exercise of that control could reduce traffic congestion, fill municipal coffers, stimulate local businesses, and reduce carbon emissions. It turns out you really can make something out of nothing. Cities would have to be crazy to give this nothing away for free.