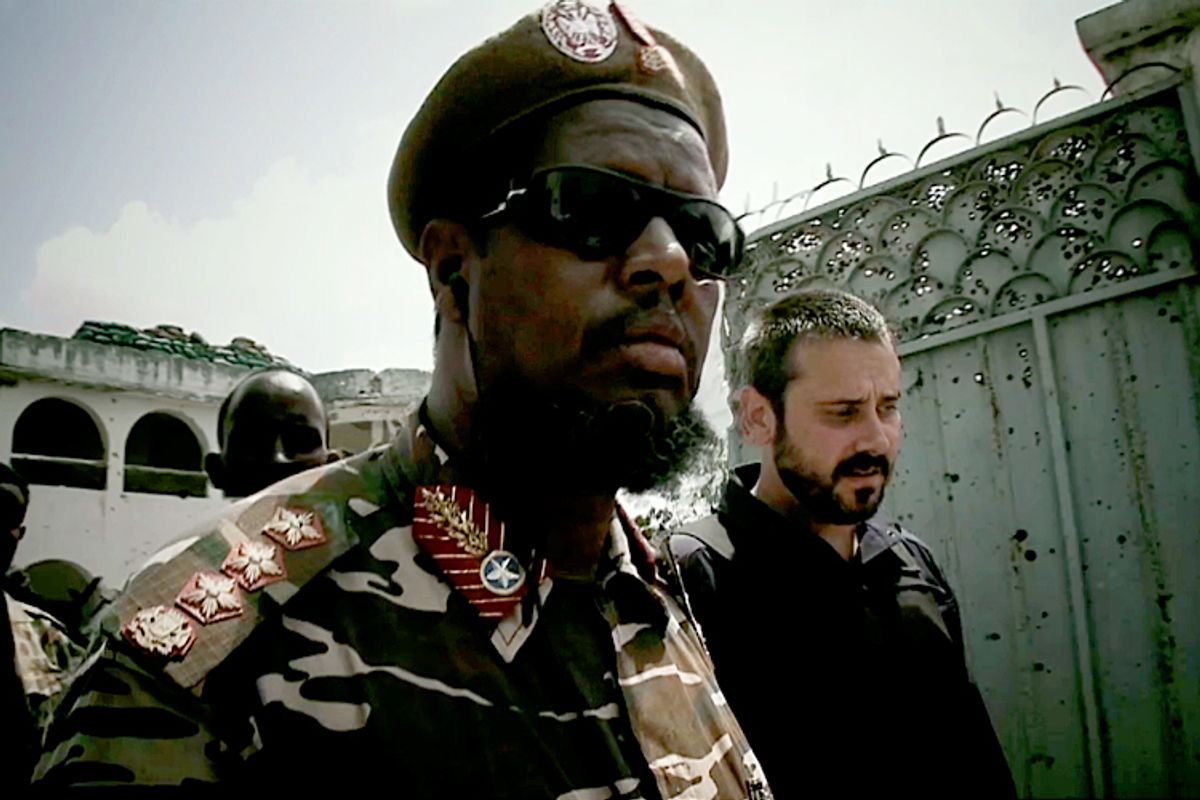 Investigative reporter Jeremy Scahill (right) with a U.S.-sponsored Somali warlord in a scene from "Dirty Wars."
--

This is what it’s come to for Barack Obama: Reality has sunk in for many Americans, who at last understand that the guy we elected on the naive expectation that he would undo the excesses of the Bush-Cheney national security state has instead made them much worse. It will be difficult, if not impossible, for Obama to escape this legacy now. He is the drone president, the assassination president, the domestic-surveillance president, whose entire administration has a professionalized passion for secrecy that makes the low-rent paranoids of the Nixon White House look like Keystone Kops. I did not suspect that I would ever again find an occasion to quote a Sarah Palin gag line, but hey: How is that hopey-changey stuff workin’ out for ya?

There are numerous ways of understanding this disheartening turn of events. Maybe the secret note that George W. Bush left in the top drawer of the Resolute desk on Jan. 20, 2009, contained a “Manchurian Candidate”-style code word that switched on the programming! Or maybe, somewhat more plausibly, the entire secret apparatus of American counterterrorism at home and abroad has become an independent and self-replicating organism, a Hydra-headed monster that can’t be killed. The president himself indirectly took that tack on Friday, when he tackled questions about the surveillance revelations for the first time, during a supposedly unrelated press conference.

Sounding only a bit testier and more defensive than usual, Obama assured us that no one was actually listening to all our sexy phone calls and then went on to say, in effect, WTF did you people expect? We elected him and we elected (sorry, “elected”) the last guy, and we elected all those idiots in Congress who passed a lot of truly terrible laws over the last 12 years that only a handful of wackos on the left and right objected to, because everybody else was peeing their drawers in terror, convinced that al-Qaida was under the bed, hiding out at the middle school, plotting to blow up the largest mall in the tri-county area.

As Rachel Maddow and my colleague Joan Walsh and others have observed over the past couple of days, the laws that enabled the enormous surveillance projects that have now come to light have been on the books for six or seven years. If the NSA, the CIA and other agencies so classified we don’t even know what they’re called – don’t laugh, because I’m not kidding – have the right to collect data on everything we say and do, why should we act shocked that they’re actually doing it? As Obama and his advisers are well aware, polling suggests that most people don’t much care about any of this. They’re OK with drones (only used to kill bad guys in faraway places with funny names, of course), and they’ve abandoned all expectation of privacy on the phone or on the Internet or at work or pretty much anyplace else. “A republic, if you can keep it,” as Benjamin Franklin supposedly explained our newborn nation to an onlooker at the Constitutional Convention. We couldn’t; we were too busy watching “Idol.”

So the real problem is much bigger than Barack Obama, and has a lot to do with the undeclared civil war that has paralyzed American politics and civil society. The president’s defenders can plausibly state that he didn’t create the current situation, that the threats against America from Islamic extremists are real, that Republicans have blocked his efforts at reform and so on. But the Obama presidency nonetheless represents specific dangers, largely because of who he is and what he appeared to represent when he entered office. I am reminded, as I so often am in recent American history, of Paul Verhoeven’s “Starship Troopers,” one of the strangest big-budget movies ever made in Hollywood. A brilliant satire that flew way over the heads of the mainstream audience of 1997, “Starship Troopers” is entirely told from the point of view of a global fascist superstate engaged in an apocalyptic war with an insect-like alien race (about which we learn almost nothing). The military dictator of this propaganda-steeped future Earth is a black woman – look how far we have come!

One of the people who’s been laboring hardest to pull the scales from our eyes is investigative journalist Jeremy Scahill, a longtime war correspondent for the Nation and the writer, producer and subject of the haunting and upsetting new film “Dirty Wars,” which hits theaters this week. “Dirty Wars” largely documents Scahill’s exploration of the campaign of drone strikes outside the recognized theater of war, in countries like Pakistan, Yemen and Somalia, and also his years of digging into the secret military strike force called the Joint Special Operations Command, or JSOC, which literally became famous overnight after the killing of Osama bin Laden. I talked to Scahill on the afternoon following the big scoops from Glenn Greenwald, the Guardian and the Washington Post about Obama’s massive spy programs, and he reflected on the president’s first big speech on national security, delivered at the National Archives in May of 2009.

“What I think is dangerous is that because Obama is who he is, an incredibly brilliant man who has the trust of the overwhelming majority of liberals -- and probably a significant number of traditional conservatives, at least on these issues -- he is going to go down in history as creating a systematized embrace of assassination as a central component of U.S. security policy. It's not that the U.S. hasn't been engaged in assassination basically from the beginning, but we now have this Nobel Peace Prize-winning transformational president, who is a constitutional lawyer, making it a permanent part of the national security infrastructure. While saying, ‘We don't want a perpetual state of war,’ he's building the machinery for a perpetual state of war.”

One eerie episode in “Dirty Wars” that hit me especially hard amid this week’s headlines is set not in Yemen or Afghanistan or Scahill’s especially terrifying journey to Somalia (you need “kidnap and ransom insurance,” and it’s not easy to get) but in the Senate Office Building in Washington. He interviews Sen. Ron Wyden, D-Ore., a strong critic of the Bush-Obama national security state and almost the only member of the Senate Intelligence Committee who’s ever willing to talk about these issues on the record. Wyden clearly wants to explain to Scahill how the Obama administration interprets the laws it uses to conduct national security operations both at home and abroad. But an aide, sitting nearby but off camera, keeps reminding the senator that those legal interpretations are classified, and he can’t talk about them.

“What Wyden was saying to me,” says Scahill, “was that whether it's the kill program or it's domestic surveillance or it's certain secret aspects of the Patriot Act, there are laws that the American people can go online and read, and reasonable people will interpret those in relatively the same way. And then there's a second set of laws, which consist of the way the administration has interpreted what those laws say. So what he's saying to me is that on any of these issues, if I could tell you how they've interpreted what you believe a law to say, it would shock you.”

Scahill's film also spends quite a bit of time exploring the story of Anwar al-Awlaki, the radical imam who was born in Las Cruces, N.M., and killed by a drone strike in Yemen in 2011. (His teenage son Abdulrahman, also a U.S. citizen, was later killed, apparently by accident or as collateral damage.) While the moral and legal quandaries posed by killing an American citizen without any pretense of due process have been much discussed – and we may never know exactly why the Obama administration deemed Awlaki such an imminent threat as to merit summary execution – “Dirty Wars” reminded me of the larger and more disturbing narrative that led up to that drone attack in the desert. In the immediate aftermath of the 9/11 attacks, Awlaki, who was then the imam of a Washington-area mosque, frequently appeared in the media as a voice of moderate Islam. He spoke out against terrorism, decried the 9/11 hijackers as Muslim renegades and was invited to speak at the Pentagon on the role of Islam in the contemporary world. The lunch menu that day, Scahill says, included bacon sandwiches. “Which gives you a sense of how awesome the Pentagon's intelligence was. You invite an imam to come and speak about Islam, and you offer him a bacon sandwich.”

Presumably it wasn’t the bacon that drove Awlaki, over the ensuing decade, to drop the stance of moderation, move to Yemen and begin preaching camo-clad YouTube sermons urging jihad against America. Maybe he was fronting as a reasonable-sounding American Muslim back in 2001 and was really a fanatic the whole time, as anti-Islamic right-wingers would have us believe. But by Awlaki’s own account, he was radicalized by the wars in Iraq and Afghanistan, by Abu Ghraib and Guantánamo, by the spreading sense in the Islamic world that America did not take the lives of Muslims or Arabs seriously, and was ready to kill civilians, kidnap and torture the innocent and destroy entire villages, in a seemingly endless spiral of worsening violence, in the name of some chimerical notion of national security.

Let’s assume, for the sake of argument, that everything the government has implied about Awlaki is true: He was essentially a general or leading strategist for al-Qaida, and he got what he deserved. But his momentous passage from suburban Virginia to a Shi’ite militant stronghold in northern Yemen, from American to enemy combatant, illustrates what has gone wrong in the entire misguided “war on terror,” which is pretty much everything. Nearly everything we have done in the name of fighting terrorism since 2001 has blown back in our faces like piss on a windy beach, turning those who should be allies into enemies and making the whole problem immeasurably worse. We can certainly point fingers at two presidents, a spineless and dysfunctional legislature, and a secretive national-security apparatus free from any significant oversight. But Obama is basically right: We decided to give the government unlimited power – or, at least, didn’t decide not to – so we don’t get to act shocked when they decide to use it. You pays your money and you takes your chance.