"Queen of the Air": Love and death in the big top

The extravagant true story of the Brad and Angelina of the circus, their great romance and secret sufferings 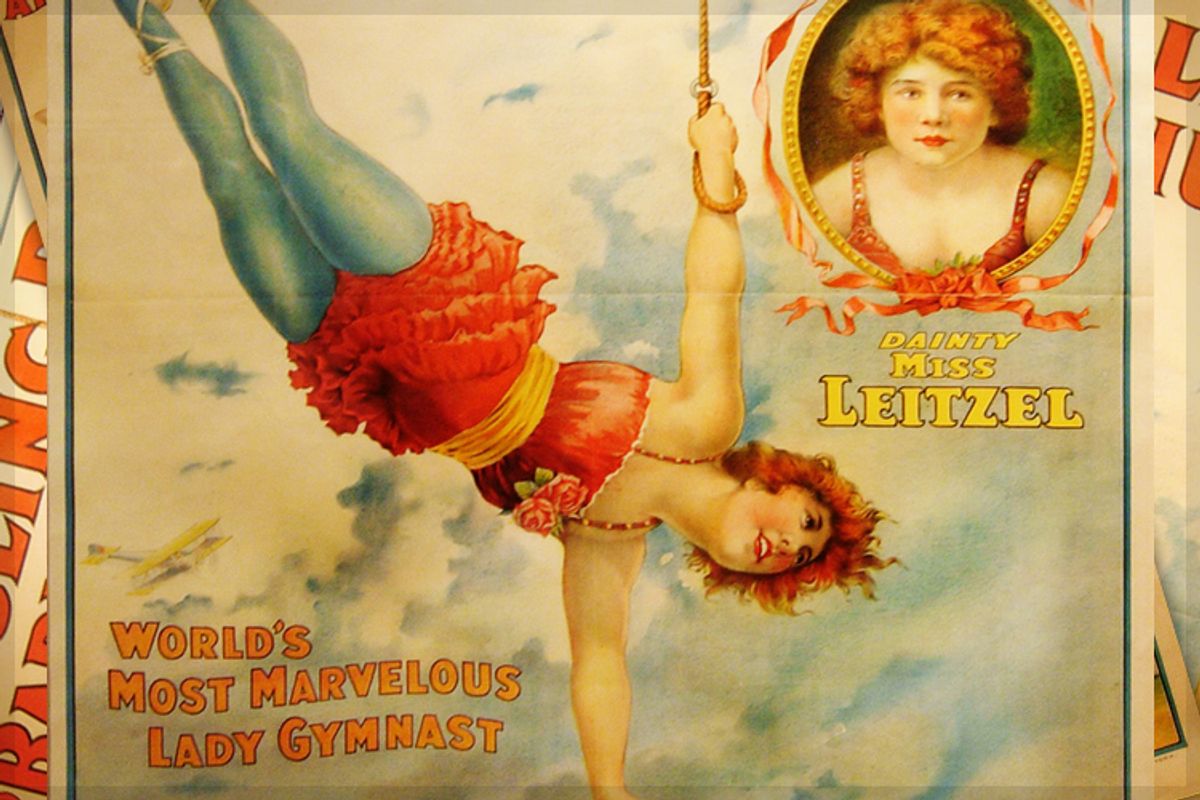 When Lillian Leitzel died in 1931, she was one of the most famous women on the planet. American servicemen, fighting World War I, had voted her "the most beautiful and attractive woman in all the world," above movie stars like Mary Pickford, Mae West and Theda Bara. She had been invited to the White House and hobnobbed with film and theater stars (Charlie Chaplin, the Marx Brothers, Will Rogers) as well as senators, bank presidents and Henry Ford. She was, her biographer, Dean Jensen, writes, "almost certainly seen live by more people of her time than any other single figure in America, whether a prima ballerina, a sports hero or even the president."

That's because, in the era before broadcast media, Leitzel was an aerialist and the headliner of the traveling Ringling Brothers and Barnum & Bailey Circus. Jensen's "Queen of the Air: A True Story of Love and Tragedy at the Circus," recounts not only her life, but that of the man who was, if briefly, her husband, Alfredo Codona, the greatest "flyer," or trapeze artist, of his day. It's a tale told in broad, bold swathes of primary color, like the gigantic posters that commemorate the big top's golden days, yet as with any good book, delight awaits in the details, as well.

I'm not ordinarily one of those people captivated by the romance of the circus milieu (anything involving juggling or clowns -- shudder), which should give you a sense of how irresistible "Queen of the Air" can be. Jensen's descriptions of the acrobats' feats are appropriately thrilling, and because he began researching this book in the 1970s, he was able to interview many of the people, some of them first-rate talkers, who knew and worked with Leitzel and Codona. He strikes just the right balance between the intimate and the showmanly, lavishing adjectives on Leitzel's posh private tent (an unprecedented perquisite for a circus performer of her day) yet taking the time to mention that a Ringling manager ("a one-time cavalry officer in the German army, he was lean and tall as a Kansas corn stalk") had his mustache trimmed in the shape of the outline of a circus tent.

Some of the most fascinating passages of "Queen of the Air" come at the beginning and describe the roots of the two principals in the late 19th century. Leitzel was conceived among "the gypsy circuses that meandered the Carpathian Mountains ... One- or two-horse enterprises, almost all of them offered a bareback riding act, along with a tumbler or juggler or two, and maybe a clown or a dancing dog or plank-walking pig." Her mother, a Czech acrobat and the child of a family-circus proprietor forced into retirement and poverty by arthritis, was rented out to another traveling-circus owner at the age of 12; the proprietor raped her and continued to molest her during subsequent seasons, but her family could not afford to keep her at home. Leitzel was his daughter.

Alfredo had a happier, if not richer, circus childhood, making his first appearance in the ring at 18 months, carried in a proto-Baby Bjorn by his Italian-American father, who worked the small towns of Mexico with a one-wagon show and dreamed of building a bigger operation to tour the U.S. By the time they met, when Leitzel was 17 and Alfredo was 16, she had become a star, performing with her mother as part of the Leaming Ladies act, which involved two trapezes suspended from an aerial bicycle. Due to the fanatical protectiveness of the act's manager, this romance never grew past puppy love -- not, that is, until they were reunited 17 years (and three marriages, collectively) later.

When they met again, Alfredo (as Dean would have it, motivated by a desire to prove himself worthy of Leitzel) had perfected the most dangerous feat in the flyer's repertoire, the dreaded Salto Mortale, or Triple "three somersaults from a flying trapeze to the hands of the catcher" on a second trapeze. As you might guess from its Italian name, this was a trick that, when improperly executed, tended to result in a broken neck. Alfredo himself reported that he always blacked out momentarily during the third revolution, an experience he named, provocatively, "the little death." "Alfredo was not only the greatest flyer who ever lived," a friend told Dean, "he was probably the greatest male performer who ever appeared in the history of the circus. Women swooned at the sight of him ... He was married to the most famous circus performer of all time."

Leitzel, billed as "Dainty Leitzel, the World's Most Marvelous Gymnast," had her own specialty. She performed on dangling ropes, seemingly in defiance of gravity, and her signature feat was to spin like a propeller, head over heels, while suspended from a ring held in one hand. "With each of the turnovers," Dean explains, "her arm dislocated from her shoulder, and then clicked back into place." She would perform dozens of these vertical revolutions (setting the record at 249) while the audience counted them off.

Yet Leitzel's physical skills, while outstanding, were not enough to make her the star she became. She was equally well-known for her frisky, coquettish persona and ability to deliver clever patter while beaming and working her way up a rope or netting. Both she and Alfredo were divas, tempestuous personalities renowned for their imperious demands, knock-down-drag-out fights and many, many love affairs. They were at once the perfect couple, the Brad and Angelina of the big top and a P.R. agent's dream, and a catastrophe waiting to happen. Leitzel was three hours late to their wedding, arriving with a rich, old (and married) admirer in tow. The admirer picked up the tab for the wedding banquet.

Jensen knows how to tell this story, with just the right degree of old-timey melodrama. Here's how he describes an argument during the long years when Codona drove himself to perfect the Triple: His father and brother "begged him to abandon his quest for the feat before it killed him or, worse, left him such a pathetic cripple that he would be belted into a wheelchair for the rest of his life. Codona could not be persuaded." In counterpoint, he pulls back the curtains concealing the brutality of the performer's lot: celebrated and fawned over one year, forced by an accident to work as an auto mechanic the next. Leitzel was surrounded by admirers and showered with gifts, but before going to bed every night she injected caffeine into her shoulder socket to tame the "pulsating, and some nights, hammering pain." Unlike even the most battered professional athletes, she performed twice a day, every day during the circus' season, and on off-season gigs in Europe.

As the subtitle promises, "Queen of the Air" ends in tragedy, but not perhaps the one you're expecting if you don't already know the story. By then, in addition to the mystery and glamour conjured around their acts, Jensen leaves you with an awed respect for Leitzel and Codona's almost perverse devotion to their craft and to the circus life. Codona commissioned a statue of a winged man clinging to a beautiful woman to stand over their adjacent graves in Inglewood Park Cemetery in California, a monument to the romance of their story. Jensen's book is a monument to all the rest of it, as well.