"Game of Thrones" finale recap: "I suppose it will go on for quite some time"

A great season of "Game of Thrones" comes to an end 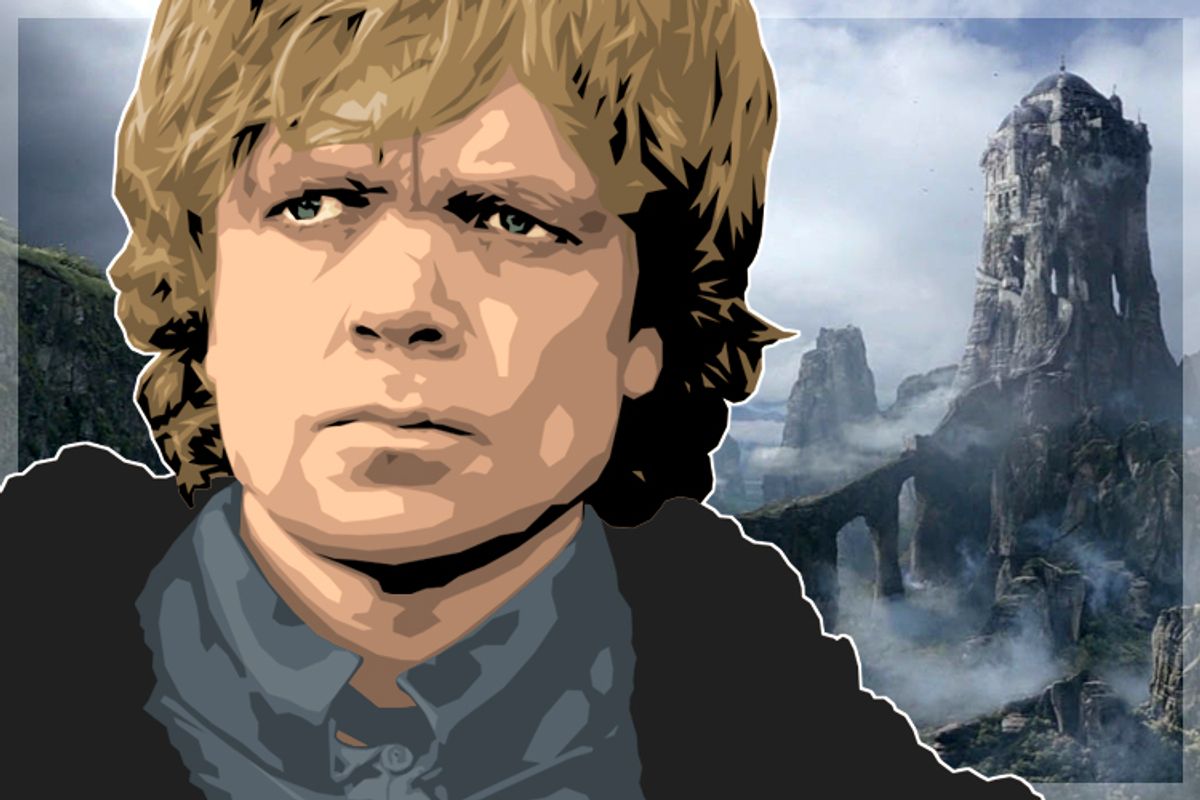 “Game of Thrones” finished its third season tonight, a pretty great season that, like the two that have come before, makes a hash of the idea of  TV “seasons” at all. Thematically bound, discrete units of television— episodes and seasons— are not of particular interest to the creators of “Game of Thrones,” and though they can, as with last week’s Red Wedding, whip out a doozie of an episode when they must, they tend to let stories develop at exactly their own pace, standard structures be damned.

This season, the slow, slow saga of Bran making his way to the wall or Davos learning to read took place alongside much more kinetic arcs, like the loss of Jaime’s Lannister’s hand, his friendship with Brienne, or the fate of Robb Stark and his army. Arya has been in nearly every episode, but has been more or less moved by grown men with agendas from place to place, waiting for her own story to truly begin. This particular weave of slack and taut storylines gives “Game of Thrones” its all encompassing, larger-than-the-viewer feel. But it also means, looking back on the last 10 episodes, what stand out to me are not episodes or some mesh of story lines but specific moments: Catelyn begging for Robb’s life, Jaime’s stump in the mud, Daenerys walking through the unsullied asking them to follow her, Brienne in the bear pit, Margaery fingering that cross bow.

If the finale demonstrated anything, it is the sometimes horrible, sometimes wonderful, always inexhaustible way that story goes on and on. Last week, Robb, a hero, a king, the kind of character a TV show (or a novel) doesn’t usually kill, died, and the story didn’t end. This is one of the major themes of “Game of Thrones” and the novels on which they are based: the world keeps going no matter what happens, no matter who dies, now matter how they die. And that, beyond just the inconsistent texture of any given episode, is why the end of a “Game of Thrones” season always feels more than a little arbitrary. All the characters, all the circumstances, all the politics are ongoing. They don’t stop— it’s too bad we have to.

As it has in season’s past, the last episode served a structural-spiritual function, both tracking the fallout of the epic events in the penultimate episode and reminding us that things go on. With Robb’s death, Westeros is nominally united under the Lannisters, but actually more fractured than ever, and as proof, the finale showed us the Greyjoy’s for the first time all season and finally really introduced us to the Boltons, who seem as cuddly as teddy bears stuffed with glass. (Ramsey, who has been torturing Theon "Reek" Greyjoy all season, even managed to take “dick in a box” and turn it from a joke into a nightmare.) The episode did minimal to no wrapping up, leaving the characters, when it could, at a crossroads.

The episode begins right after the Red Wedding, with Arya witness to her brother’s body, his direwolf’s head attached to it, being paraded around the destroyed Stark camp. (I had wondered, after last week’s episode, if the show would skip this particular image, which is extremely memorable in the books. I though they managed to walk the line of being really disturbing without being nauseating.) As if Arya didn’t already have a serious case of vengeance, it gets much worse almost immediately: she stabs a man who claims he attached the wolf head to Robb’s body, her first kill, and obviously not her last.

Bran makes it to the wall, and then walks on through, he and his dour band of misfits armed with dragon glass and a plan to do what no king can, stop the White Walkers. (Bran also tells the story of the Rat Cook to remind us, living in the uncouth  21st century, just how unacceptable it once was to harm a guest, as the Freys did the Starks.) Sam and Gilly also make it to the wall and find themselves a place to stay, for now, and are soon joined by an eagle scratched, Ygritte-shot Jon. Sansa finally seems to be showing enough sense to enjoy Tyrion, treating him like a prankster sibling. (I love it when Sansa and Arya talk about one another, sweetly missing each other too late, both longing for a simpler time when they were unburdened enough to just hate a sibling.) But that changes once she learns what happened to her brother and mother.

Stannis and Tywin, essentially the two kings that are left, Joffrey’s title be damned, both argue that there is a certain amount of bloodshed that is acceptable to prevent even more bloodshed. Tywin is cruel and dismissive, but I forget to hate him when he is putting Joffrey in his place: “Any man who must say I am the king, is no true king,” he tells the sniveling, freaky Joffrey — who is literally making plans to serve Sansa Robb’s head for dinner — and almost gets the whole council to say "Amen" (or maybe that was just me). But after sending Joffrey to sleep without any supper, Tywin becomes Tywin again, having a conversation with Tyrion that requires Tyrion to utter the sentence, “I won’t rape her,” because that actually does not go without saying.

Then Tywin defends his decision to have the Freys kill the Starks, even when they were guests, because it would end the war and protect the Lannisters. Tywin may have a point—  he’s making a Hiroshima-Nagasaki argument here anyway— but he can’t leave it at that, he always has to become atrocious. When Tyrion asks Tywin to name a time his interests and the family’s didn’t align, when he didn’t do as he desired, Tywin’s example is the time he wanted to murder baby Tyrion, but didn’t because he is a Lannister. It is actually a miracle all Tyrion does is drink all day.

Meanwhile, the far less charismatic Stannis is contemplating slaughtering Gendry as a sacrifice to the Lord of Light. Davos, who has recently bonded with Gendry over growing up near raw sewage, is against it. But Stannis, who is the worst, was really convinced by Melisandre’s last trick with Gendry’s blood, some leeches, and a curse on Robb Stark. He decides “What is the life of one bastard boy against a kingdom? ... The boy must die.” Davos helps Gendry escape in a boat (glad that kid made it out alive, assuming he doesn’t capsize), only to have Stannis try to argue that by setting Gendry free, “How many tens of thousands have you doomed?” You know, because Gendry’s death would have made Stannis king, and thus forestalled lots of battles. Stannis sentences Davos to death, but that sentence is almost immediately commuted by Melisandre, who— quick as she can stare in the fire— decides that the really serious and scary stuff is going on up North, as Davos says it is. Think the Lord of Light might have told her a bit sooner.

Both Tywin and Stannis’s strategy— kill the right people, to avoid the death of more people— is undermined by Cersei and Tyrion’s latest brother-sister chat, which gestures at questions of  terrorism and insurgency, and whether any amount of violence can do anything but beget more violence. (Tryion and Cersei have had quite a few good talks this season: they may hate each other, but they do know each other and they are family. They can be honest.) “How long does it go on?” Tyrion asks, about the war, about their lives being in thrall to their father and the family name. “Till we’ve dealt with all our enemies,” Cersei says. “Every time we deal with one, we create two more, “ he replies. “I suppose it will go on for quite some time,” she answers.

Cersei is spiteful and paranoid and a terrible mother (calling your child "someone of your own" is part of the problem) but her immense isolation, her pain and deep unhappiness, her occasional flashes of insight, keep me hoping that, at some point, she will make some sort of breakthrough, a stop-being-an-asshole breakthrough. Maybe, one time, after admitting she is miserable and her son has grown up into a horrible creep she will not revert to her closed-off, icy, malicious self. It will never happen, but it’s a testament to this season’s writing that I even want it to. And it's a testament to the writing of Jaime that when he finally walks into her bedroom— dirty, humiliated, scared— I really hoped those two siblings would at least embrace, rather than stare at each other with super sad faces.

But instead of ending the season on some incest,  the episode ends on Daenerys, mother of dragons, being mother to a whole new city of freed slaves, who love her so much they take her crowd surfing. Seeing as this was the last scene of the season, I wanted to enjoy it more, but I found it much more rousing the first time the show did it, back in episode four. Still, repetitive as it is, it's fitting: after Robb’s death, there may be chaos, but there are also dragons. By next season, I bet they'll be huge.