Jeremy Irons is officially the worst 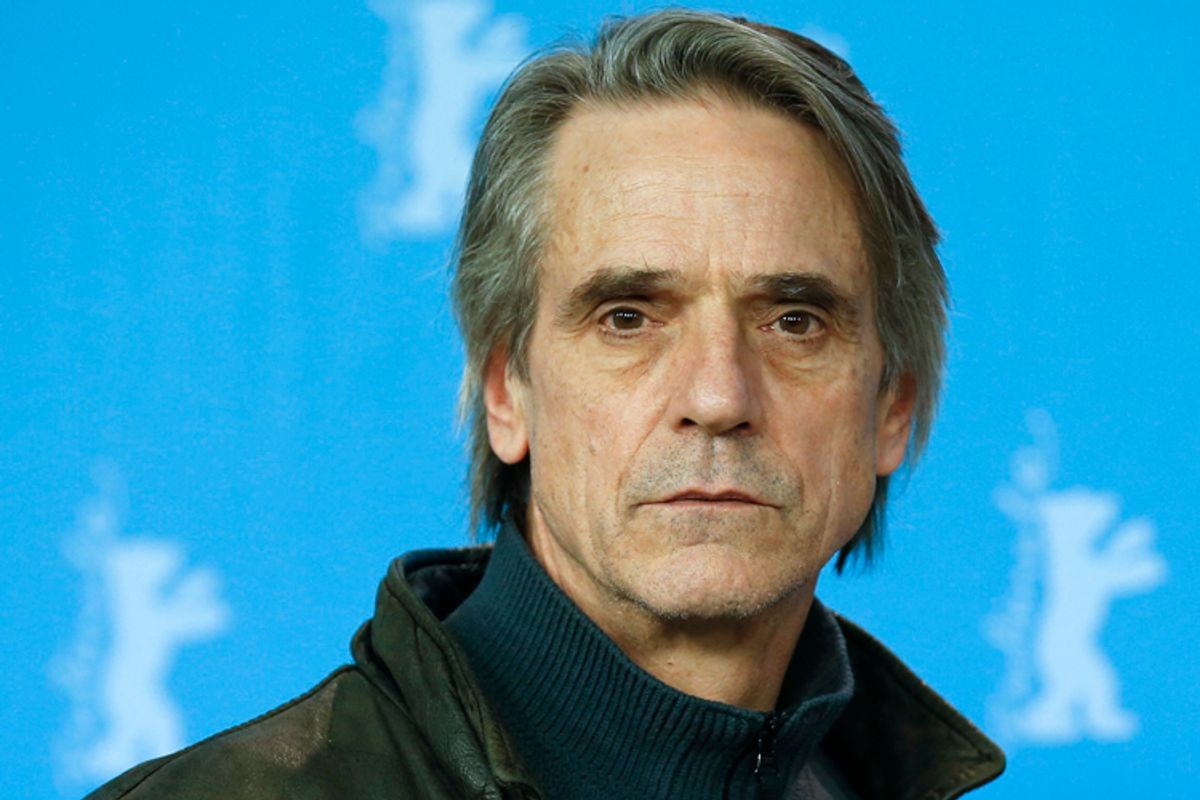 Someone, please help Jeremy Irons find a job. Because the Oscar-winning star of the just-canceled Showtime series "The Borgias" needs a better gig than his current one of full-time troll.

In April, Irons gave a bizarre interview with Huffpost Live, in which he speculated that same-sex marriage was a gateway to incest. "I worry that it means somehow we debase or we change what marriage is," he argued. "I just worry about that. I mean taxwise, it’s an interesting one because, you see, could a father not marry his son?" And in February, the 64-year-old took an unusual view as he recounted the story of a female friend who'd been entangled with a much older man when she was 13. "There was sex involved," he said, applauding her casual attitude toward the youthful statutory rape experience. "There are people who are victims in life," he explained, "and I don’t think they should be encouraged."

Now, the man who once played literature's most infamous pedophile, Humbert Humbert, has expanded on his sympathetic view toward sex abuse. In a weekend interview with the Sunday Times, he weighed in on the recent revelations of sexual abuse that went unchecked for decades in the U.K. entertainment industry -- most notably the stunning track record of the late TV presenter Jimmy Savile. Savile is believed to have abused upward of 450 female and male victims, some as young as 8, over a 40-year span. A police investigation released earlier this year called Savile "one of the U.K.’s most prolific known sexual predators." To which Irons says, pshaw.

Channeling his inner Monty Python, Irons explained that young folks who hung around on the sets of shows like "Top of the Pops" in the '70s were obviously "goers" (slang for someone who likes sex a lot or is promiscuous), adding, "What were those girls doing there? What did they want, the lot of them, when they hung around the caravans and trailers afterwards? There was a sort of sexual freedom. To have all that dragged up for something relatively innocuous -- that’s tough. They seem to be in a mood to pillory anybody." I don't know what they wanted either, but I'm guessing the answer isn't, to be raped and then mocked about it 40 years later by that guy from the "Die Hard" movies.

He did concede that Savile's behavior "sounds appalling" but also said that "there is a blanket term for child abuse, and if the worst thing you have done was put your hand on someone's thigh under their skirt, that may be sexual abuse, but it’s not like buggering a 9-year-old boy." Apparently, then, sexually abusing boys is worse than abusing girls, and abusing 9-year-olds is worse than abusing, say, 12-year-olds. GOT IT.

Irons further mentioned that he currently feels "incredibly sorry" for the "television guy on 'Coronation Street'" -- an apparent reference to soap actor Bill Roache, who is currently facing charges of raping a teenage girl and sexually assaulting four other girls between the ages of 11 and 16 in the 1960s.

But then again, maybe he was referring to the sex abuse case against "Coronation Street" actor Michael Le Vell, who is awaiting trial on 19 different criminal charges, including rape of a child. It's hard to keep track lately.

There was a time when Irons was an entertaining actor -- now he's just a sad old creep. And while it's big of him to have such compassion for guys who are accused rapists, I've got none to spare for anyone who says that young sexual abuse victims were just asking for it.