What spying apologists don't tell you about "thwarted plots" 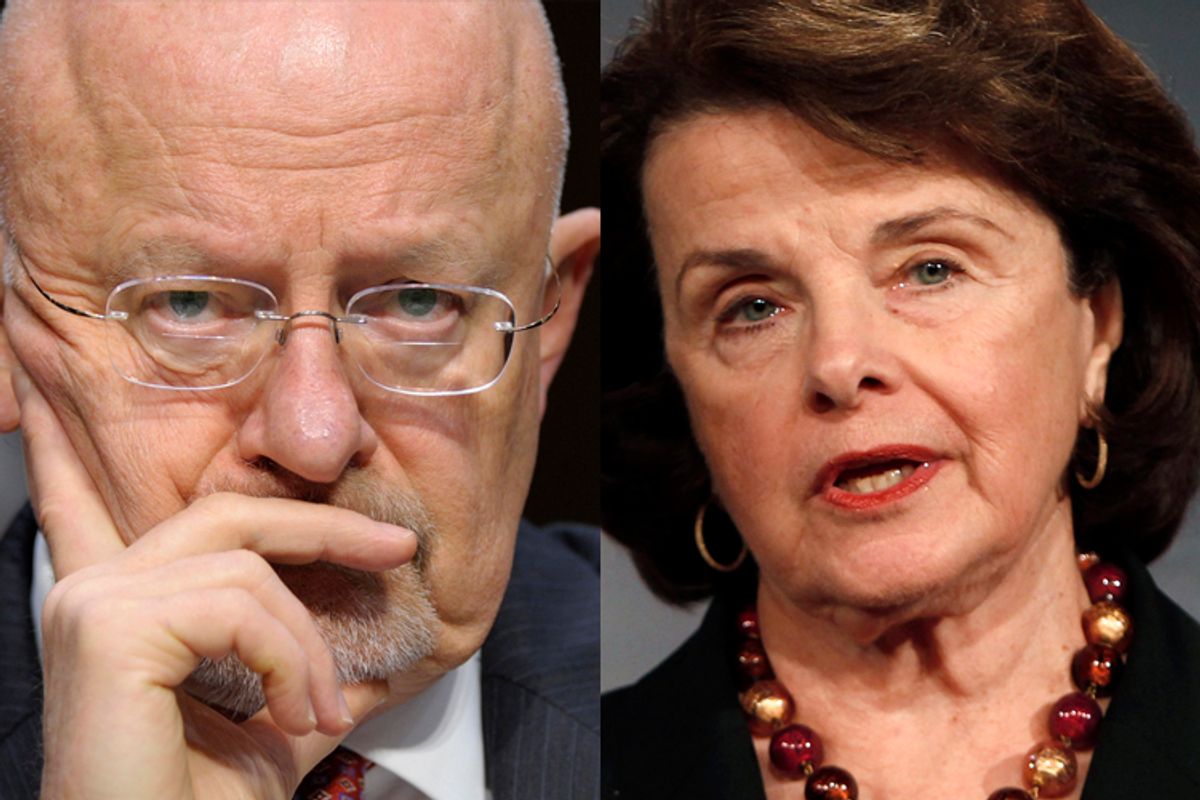 Senate Intelligence Committee Chairwoman Dianne Feinstein, D-Calif., explained on ABC’s "This Week" Sunday that in one of the signature uses of the dragnet collection of every American’s phone records, the NSA managed to track one of our own informants, David Headley, as he helped Islamic terrorists plan attacks. She did not mention that it did nothing to prevent the 2008 terrorist attack in Mumbai, which killed 166 -- and in which Headley had a role in planning.

Director of National Intelligence James Clapper called the effort to track Headley – which did manage to thwart Headley’s 2009 plans to attack a Danish newspaper – a success, in an interview with Andrea Mitchell. Such is the value of these programs, it appears, that top proponents of the program celebrate the tracking of a DEA informant gone bad as their main talking point.

“U.S. officials say Headley simply slipped through the cracks,” ProPublica reported earlier this year in a blockbuster story on Headley. ProPublica describes competing claims about when the Drug Enforcement Agency, which first recruited Headley in 1997, stopped using him as an informant; DEA insists he was deactivated in 2002, while other sources say he remained a U.S. informant through 2005. What’s clear is that Headley spent the subsequent years leading up to the 2008 Mumbai attack traveling form Pakistan to India, casing out the terror plot.

Multiple warnings to the Indian government — perhaps based on the intelligence now being touted — failed to prevent the attack. “U.S. officials learned enough about his activities to become concerned, monitor him intermittently and pick up fragments of intelligence that contributed to the warnings to India,” reported ProPublica. At the time of the attack, Headley had returned safely to Lahore, Pakistan, and he even traveled between there, Chicago and Europe thereafter, planning another plot. In October 2009, the FBI arrested Headley in Chicago as he traveled to Pakistan to hand off intelligence for an attack on Denmark.

Before we start celebrating our finding an informant-turned-terrorist we lost as one of the successes that makes massive spying worthwhile, shouldn’t we first get an explanation for how our intelligence agencies lost track of Headley in the first place?

The flood of missed warnings about Headley’s increasing ties with Islamic terrorists did lead to an investigation led by DNI Clapper’s office in 2010, but the results of it have not been made public. Yet the embarrassment of having a former American informant play a key role in one of the biggest attacks since 9/11 doesn’t seem to have prevented Clapper and Feinstein from boasting of NSA’s success in his case.

Headley’s attacks are not the only ones cited by Feinstein and Clapper. Feinstein also cited the case of Najibullah Zazi, an Afghan immigrant to the U.S. who plotted to blow up the New York subway in 2009. FBI’s success in thwarting Zazi’s attack is probably the most serious publicly known example of a thwarted attack. To the extent the NSA’s programs played a key role, then, it is a significant success.

But even there, the claims appear fuzzy or overblown. Feinstein, for example, describes the success this way (emphasis added): “[Zazi] made the decision that he was going to blow up a New York subway, who went to a beauty wholesale supply place, bought enough hydrogen peroxide to make bombs, was surveilled by the FBI for six months, traveled to go to New York, to meet with a number of other people who were going to carry out this attack with him, and were arrested by the FBI, who has pled guilty and in federal prison.”

It’s an interesting use of the word “surveilled,” because according to sworn court testimony the lead that identified Zazi was an email account identified in a British terrorism case, which the NSA tracked. That account, not Zazi, was surveilled. Days, not months, before Zazi’s planned attack, he sent an email to the account asking for help making explosives, which led the FBI to uncover his plot.

PRISM — the direct access to Internet companies’ data, which Clapper’s office describes as a “computer system used to facilitate the government’s statutorily authorized collection of foreign intelligence information from electronic communication service providers” -- appears to have been the means by which FBI conducted this surveillance. A New York Times source explains PRISM was the only means to access the email: “It was through an e-mail correspondence that we had access to only through Prism.”  But tracking the email account would have been legal under the FISA laws in place prior to 9/11. As such, PRISM seems to have made it easier to capture Zazi, but may not have been pivotal.

That makes the Zazi case troubling too, because there is a good deal of circumstantial evidence that the government used Section 215 to identify people in Aurora, Colo., who had, like Zazi, purchased hydrogen peroxide and acetone, which (in addition to being common household chemicals) are precursors for the explosives Zazi used. The government described three people associated with Zazi in an affidavit justifying his detention, implying they were accomplices. Yet, these three unnamed people never appeared in the legal case again. They appear to have been completely innocent of any tie to Zazi’s plot. If so, then, in addition to being a success story, the Zazi case would also be a perfect example of how these tools can implicate perfectly innocent people as terrorists for something as innocent as buying hair care supplies.

At the very least, the fuzzy cases Feinstein and Clapper are boasting about demonstrate the need for far more transparency on these tools. If they’re justifying a gross incursion on American privacy, in part because they helped track down an informant our intelligence services lost track of -- and created false positives based on hair bleach purchases -- then we need to seriously reconsider their use.