Who are the real criminals in NSA case?

Whistle-blower Edward Snowden was simply doing what the government said: "If you see something, say something" 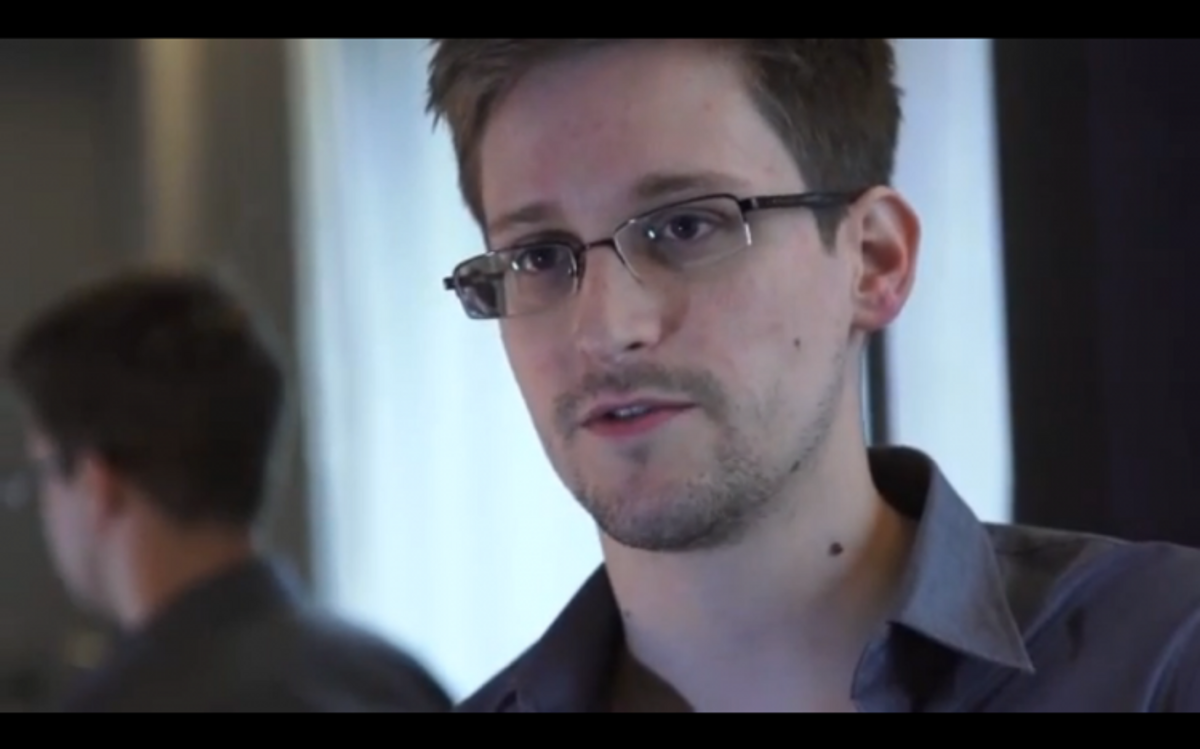 Permanent Washington's reactions to the Guardian's ongoing revelations about the Obama administration's unprecedented mass surveillance system have been at once boringly predictable and incredibly revealing. They are so revealing, in fact, that we are left with a troubling question that a civilized society should never even have to ask: Namely, who are the true criminals -- those who violate the law, or those, like 29-year-old Edward Snowden, who blow the whistle on the violations?

Before getting to that monumental query, let's first review officialdom's reactions to the NSA story that are leading to it.

There was the claim by Obama officials that the NSA spying system has made us safer by thwarting the New York subway bombing plot. Such a talking point is designed to halt the conversation about civil liberties entirely by insisting that any action that makes us safer is laudable, even if it runs roughshod over the Fourth Amendment. In addition to the argument's generally questionable logic, though, the problem for the White House was that the specific claims were thoroughly debunked by news organizations and Intelligence Committee member Sen. Mark Udall, D-Colo., within a few days.

There has also been the attempt to marginalize the messengers -- and thus marginalize the message -- via the cheap smear. We've seen this a lot lately, most grotesquely, as Rolling Stone's Matt Taibbi points out, in the chumpbait that has defined the coverage of Bradley Manning. In the NSA spying case, it's much the same thing.

For instance, there were the declarations by one of the most prominent Obama officials-turned-corporate-mouthpieces, Tommy Vietor. Using the same xenophobic tactic that famously saw John Kerry derided as French, the president's former National Security spokesman derided the Guardian America as a "foreign" organization (which, by the way, it isn't). There was also a horrifying report from the Atlantic's Steve Clemons of intelligence officials reportedly discussing the idea of "disappearing" Guardian reporter Glenn Greenwald and his source as retribution for the disclosures.

Meanwhile, the New York Times issued a damning-with-faint-praise profile of Greenwald. As Yves Smith notes, the Times loaded it up with vapid ad hominem rhetoric from Greenwald's ideological opponents -- and, as important, made sure to focus far more on scrutinizing the journalist than on either evaluating the implications of the news he broke, or even whether the NSA program ever should have been secret in the first place. No doubt, the Guardian's source, Snowden, will be treated in much the same way.

Finally, and most illustrative of all, there was also the attempt to shift the focus of outrage away from the potentially major crimes against the Constitution's Fourth Amendment and to channel the outrage instead at the affront to the Obama administration's political interests.

We've seen, for example, news from the New York Times that the NSA whistle-blowing is "expected to attract an investigation from the Justice Department." Reuters followed that up with a report that "a U.S. intelligence agency formally requested a criminal probe (of) the leak." Vietor chimed in by declaring his shock that "people aren't more concerned about the systematic leaking of Top Secret U.S. national security information." Government contractor Booz Allen Hamilton, which employed Snowden, said the disclosure is "a grave violation of the code of conduct and core values of our firm." And, of course, President Obama's Director of National Intelligence James Clapper issued the obligatory tough-talking statement calling the revelations "reprehensible."

Here is where the entire definition of crime starts becoming blurry.

Notice that, according to the Times and Reuters, the Justice Department and the unnamed national security agency are pursuing an investigation into the whistle-blowing but not into the potential crimes against the Constitution. Same thing for Booz Allen Hamilton: The company declared that the "grave violation" of its "core values" is the disclosure of the potentially unconstitutional mass surveillance, not the mass surveillance itself. Same thing for Clapper; what's "reprehensible" to him is the disclosure, not the NSA's potential crimes. Notice, too, that neither Clapper nor Justice officials are calling for an investigation into Clapper committing one of recent history's most explicit acts of perjury when answering congressional questions about surveillance (and yes, perjury before Congress is a criminal act).

In other words, the only acts being discussed in a criminal context are those that expose the Obama administration's possible crimes, not the administration's possible crimes themselves. In this distorted worldview, Edward Snowden's decision to expose the NSA's potentially unconstitutional behavior is somehow presented as a bigger crime than the NSA's behavior itself.

In forwarding such a skewed criminal justice ideology, the Obama administration is, first and foremost, violating its pledge to voters. After all, in 2008, Obama ran for president promising to respect whistle-blowers. Back then, he declared that "often the best source of information about waste, fraud, and abuse in government is an existing government employee committed to public integrity and willing to speak out." He added that "such acts of courage and patriotism, which can sometimes save lives and often save taxpayer dollars, should be encouraged rather than stifled."

But there's more than just hypocrisy at work here. To construct such an Orwellian definition of crime -- one in which crime-exposers are depicted as the most dangerous criminals -- the administration and Permanent Washington are employing a marvelously deceptive double standard about information itself. Whether it is the WikiLeaks cables, disclosures about unlawful torture or the recent NSA revelations, those who reveal facts that are inconvenient to the national security establishment are now portrayed as criminal "leakers" requiring prosecution. Yet, whether publicly promoting its cyber-warfare operations, selectively disclosing skewed (and factually inaccurate) information about torture to sympathetic filmmakers, or providing top-secret "kill list" information to help the New York Times publish election year hagiography, the same national security establishment is regularly disclosing classified information that serve its political and ideological interests.

For those of us who believe information should be as free as possible in a democratic society, the latter kind of disclosures aren't necessarily objectionable unto themselves because even if they are politically skewed, they at least offer a bit more governmental transparency. What's objectionable is the double standard whereby we hear calls to prosecute politically inconvenient whistle-blowers like Manning, John Kiriakou and Snowden, but don't hear the same kind of superheated rhetoric aimed at, say, those like Leon Panetta or any of the officials quoted in the Times "kill list" story. It is objectionable because it suggests that the Obama administration isn't respecting the fundamental American notion of equal protection under the law; it is instead applying different standards to its political enemies and its political friends.

"The reality is the Obama administration has either authorized or acquiesced to the leak of information that is deemed politically beneficial, while relentlessly investigating and prosecuting those who reveal information that reflects poorly on his administration and the U.S. government," says American University professor Jeff Bachman.

To see this double standard in action, go back to Vietor's statements about the NSA snooping. Because that disclosure embarrasses his old boss, he derides "the systematic leaking of Top Secret U.S. national security information." Yet, while he was the White House's national security spokesman, he was part of the administration's communications apparatus that orchestrated the systematic leaking of top-secret U.S. national security information to the New York Times to help that paper publish its "kill list" encomium about Obama the War President. He was also in the government when the administration was leaking information to the director of "Zero Dark Thirty."

Where's Vietor's worry about those latter leaks, you ask? It's nowhere, because the new definition of crime and wrongdoing has less to do with a dispassionate analysis of the Constitution than it does with a political vendetta against ideological opponents.

In his writeup of the Manning trial, Taibbi sums up what is really at stake in the reaction to all of these information disclosures.

"If you can be punished for making public a crime, then the government doing the punishing is itself criminal," he writes. "Who's the right kind of person to be let in the know about the fact that we systematically turned academics and other 'suspects' over to the Iraqi military to be tortured? We want people who will, what, sit on this stuff? Apparently the idea is to hire the kind of person who will cheerfully help us keep this sort of thing hidden from ourselves."

The answers are, of course, obvious; after all, our own government tells us that "if you see something, say something." Doesn't that principle apply to those like Snowden and others when they believe they're witnessing crimes against the Constitution?