Put the NSA on trial

With potential perjury by top officials, and new questions about spying, let's stop assuming everything is legal 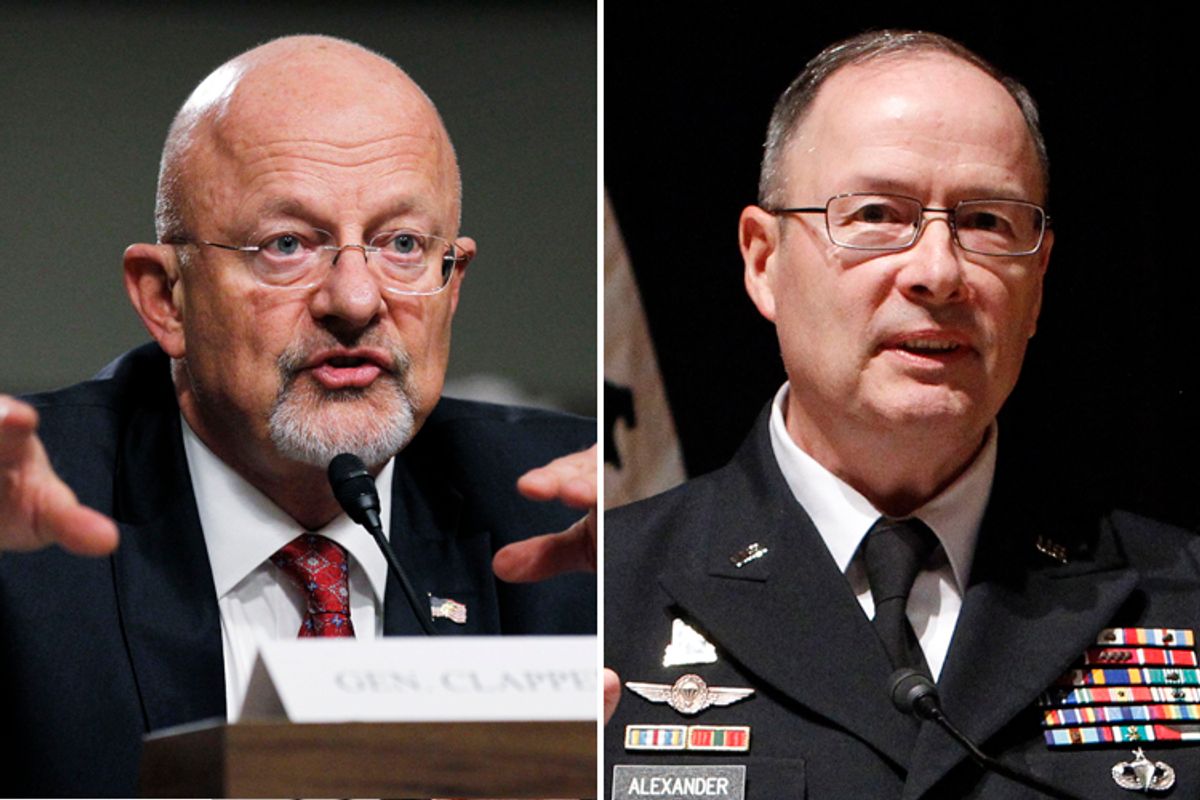 "When the president does it that means it is not illegal." These infamous words from Richard Nixon appear to summarize the public legal justification for the Obama administration's unprecedented mass surveillance operation. Perhaps worse, Permanent Washington would have us believe that this rationale is unquestionably accurate and that therefore the National Security Administration's surveillance is perfectly legal.

For example, Richard Haas of the Council on Foreign Relations said of Edward Snowden: "'Whistleblower' is person who reveals wrongdoing, corruption, illegal activity. none of this applies here even if you oppose U.S. government policy." Likewise, the Boston Globe's Bryan Bender insists, "I wish media would stop calling Snowden a whistleblower -- it maligns those who truly reveal corrupt or illegal activity." And the New Yorker's Jeffrey Toobin definitively states: "These were legally authorized programs."

The idea here, which has quickly become the standard talking point for partisans trying to defend the NSA program and the Obama administration, is that while you may object to the NSA's mass surveillance system, it is nonetheless perfectly legal as is the conduct surrounding it. Therefore, the logic goes, Snowden isn't an honorable "whistle-blower" he's a traitorous "leaker," and the only criminal in this case is Snowden and Snowden alone.

The first -- and most simple -- way to debunk this talking point is to simply behold two sets of testimony by Obama administration national security officials. In one, Director of National Intelligence James Clapper categorically denies that the government "collect(s) any type of data at all on millions or hundreds of millions of Americans." In another, the Guardian reports that NSA Director General Keith Alexander "denied point-blank that the agency had the figures on how many Americans had their electronic communications collected or reviewed."

Both of those claims, of course, were exposed as lies by Snowden's disclosures. So at minimum Snowden deserves the title "whistle-blower" (and the attendant protections that are supposed to come with such a title) because his disclosures outed Clapper and Alexander's statements as probable cases of illegal perjury before Congress. In other words, in terms of perjury, the disclosures didn't expose controversial-but-legal activity, they exposed illegal behavior.

That's not some technicality, by the way; the whole reason perjury before Congress is considered a serious crime is because if executive branch officials like Clapper and Alexander are permitted to lie to the legislative branch, then that branch cannot exercise its constitutional oversight responsibilities. Harsh punishment for perjury is considered a necessary deterrent to such deception.

There's also the issue of whether the NSA's surveillance itself is legal, and whether Snowden's disclosures show the NSA is continuing to break U.S. federal statutes (we'll get to the Constitution in a second). Yes, you read that right: The word "continuing" is appropriate because back in 2009, NSA officials admitted they were breaking the law.

As the New York Times reported at the time, the agency "intercepted private e-mail messages and phone calls of Americans in recent months on a scale that went beyond the broad legal limits established by Congress." Additionally, the Times noted that "several intelligence officials, as well as lawyers briefed" about the illegal activity "described the practice as significant and systemic." Meanwhile, Sen. Jeff Merkley, D-Ore., yesterday declared that his review of the program proved it violates federal statutes.

"When I saw what was being done, I felt it was so out of sync with the plain language of the law," he told MSNBC.

In light of the NSA itself already admitting it broke the law in "systemic" fashion; in light of a prominent senator saying the program is illegal; and in light of the "Boundless Informant" disclosure showing the NSA may be broadly surveilling domestic (rather than exclusively foreign) communications as statutes are supposed to curtail: In light of all that, why would anyone simply assume at face value that the program Snowden exposed is perfectly legal?

Finally, over and above whether the NSA program is complying with federal statutes, there's the issue of the program's constitutionality -- aka the ultimate definition of "legality."

Permanent Washington and Obama partisans who support the NSA surveillance program cite the Patriot Act and the fact that NSA obtained a FISA warrant as proof that the program is legal and as a way to ignore the constitutional questions. They would have us not only ignore the NSA's own aforementioned admissions of illegal behavior, but additionally have us believe the constitutionality of NSA's unprecedented surveillance and of such a broad-sweeping "ongoing" FISA warrant has already been definitively established, even though, of course, it hasn't. Not even close.

Four cases are particularly relevant here. In the first two (ACLU vs. NSA and the al-Haramain charity case), district courts ruled for plaintiffs in their arguments that the NSA's warrantless surveillance is illegal. There was also the Clapper vs. Amnesty International case, which challenged the constitutionality of the underlying FISA law, which authorizes the kind of surveillance that Snowden's disclosures document. And, according to Mother Jones, there is "an 86-page court opinion that determined that the government had violated the spirit of federal surveillance laws and engaged in unconstitutional spying." In that latter case, the Office of the Director of National Intelligence actually admits that the NSA has engaged in behavior that is "unreasonable under the Fourth Amendment" and that "circumvented the spirit of the law."

In the first three cases, technicalities won the day when they were all eventually overturned not on grounds that the NSA's mass surveillance is constitutional, but on grounds that the plaintiffs supposedly didn't have standing. Summing it up, Reuters reports, to date, "The (Supreme Court) has refused to review government surveillance practices adopted since the attacks of September 11, 2001."

Why weren't all these plaintiffs granted standing, you ask? As legal expert Marcy Wheeler notes, it's all related to -- you guessed it! -- secrecy.

"The government has gone to great lengths to say because this is all secret, no one can prove they've been surveilled, so (plaintiffs) can't make a harm argument," she said.

Meanwhile, on the fourth case reported by Mother Jones, the government is still fighting to keep the court ruling secret.

All of that brings us back to Snowden's disclosure. With his whistle-blowing, more germane details about the NSA's entire surveillance operation are now public, meaning other plaintiffs may now have access to information necessary to achieve standing. And there are, indeed, already other plaintiffs: For instance, Sen. Rand Paul (R) is promising to mount a Supreme Court challenge to the constitutionality of the broad FISA warrant at issue in Snowden's disclosure (at issue will be the yet-to-be-adjudicated question of whether such an "ongoing" warrant that allows spying on millions of Americans really comports with the Fourth Amendment's "probable cause" precept). Similarly, the Electronic Frontier Foundation already has a case against NSA surveillance pending.

Those cases coupled with the information from Snowden could, in turn, compel an explicit Supreme Court ruling on the entire surveillance system's legality.

Looked at from a constitutional perspective, then, we shouldn't simply assume Snowden's disclosures are about a controversial-but-legal NSA program, as NSA defenders and Obama loyalists assert. Instead, it's quite possible they may help definitively prove the illegality of the surveillance operations.

No doubt, all these statutory and constitutional questions surrounding the NSA's surveillance operations are why when publicly claiming that the program is perfectly legal, Obama officials also, according to Businessweek, refuse to make public their jurisprudential justifications for such a claim. They clearly fear that when subjected to scrutiny, the program will be shown to be, as Sen. Merkley put it, "Out of sync with the plain language of the law."

Thus, the administration's strategy is to at once stonewall on the details and insist ad nauseam that everything is perfectly legal, when that assertion is, at best, a fact-free assumption, and more likely a devious misdirect. That Permanent Washington and so many Obama loyalists would nonetheless echo such a misdirect is a commentary on how political self-interest and partisanship now trumps everything else -- even the law of the land.