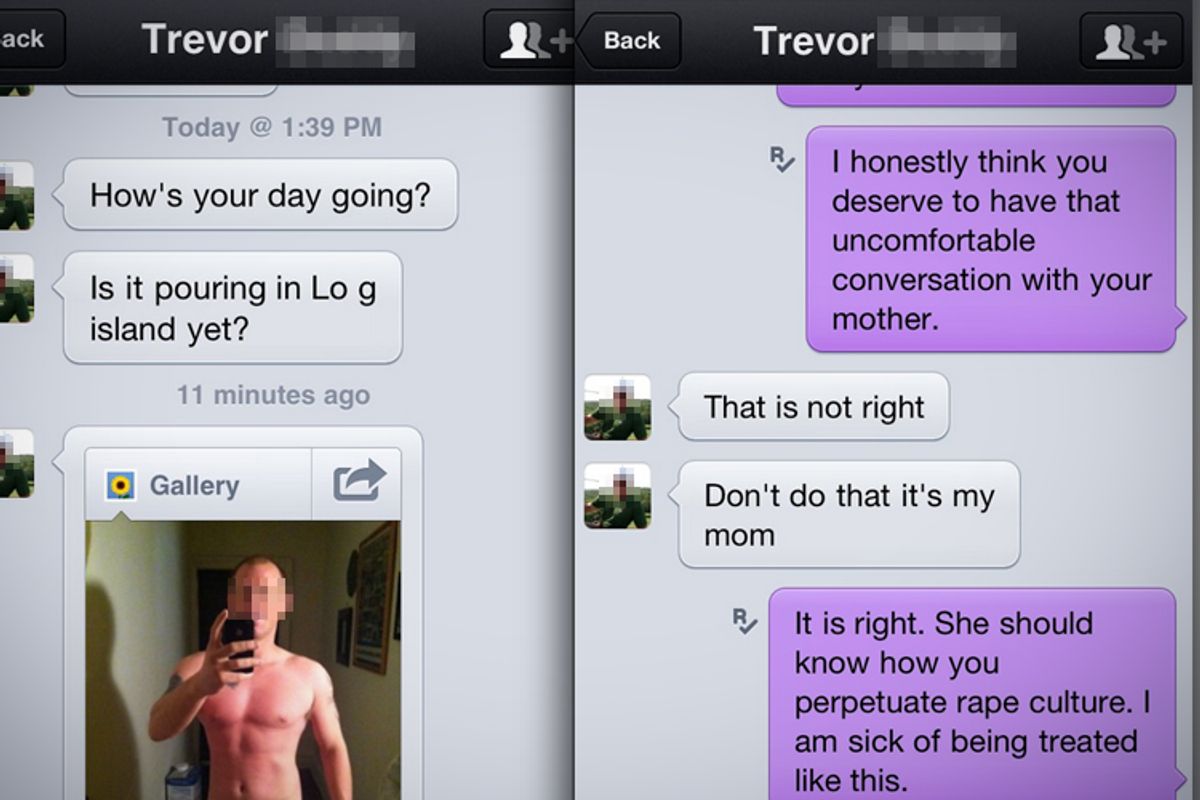 When an Internet charmer by the name of Trevor sent a young woman an unsolicited dick pic, she responded with the situational equivalent of, "Would you speak to your mother with that mouth?" That is to say: She sent their correspondence to his mom. Then she posted screen captures of their conversation on her blog, aheartbeatchanged, which is currently down for unexplained reasons, with the warning, "Attention assholes: don’t sexually harass a girl when she can easily find you on Facebook and send your mom proof of your perpetuation of rape culture." Then it -- both the post and Trevor's "it" -- went viral.

It seems to be the year of female Internet vigilantes taking on male misbehavior. Just last week, as Salon's Anna North reported, a woman outed on Facebook a stranger she allegedly overheard boasting about his marital infidelities. Naturally, the post went viral. A couple of months ago, Adria Richards tweeted a photo of men at a tech conference who she claimed were making sexually inappropriate jokes. It too blew up online, and one of the men was fired.

Before you jump to any conclusions about the appropriateness of this young woman's bold move, you have to actually read her alleged exchange with Trevor, whom she met on the app Let's Date. When he allegedly sent the photo their conversation was strictly G-rated. They were literally talking about the weather. "Is it pouring in [sic] Lo g island yet?" he wrote. When she didn't respond, he followed up with a nude mirror selfie (to his ever-so-slight credit it was at least classier than the popular disembodied penis shot).

She made her displeasure clear and he responded with, "You don't like?" and "Too big for ya?" Her response was straightforward: "I didn’t need to see that. I don't need to be disrespected by someone I don't know." In true creep form, Trevor told her to "relax," it's "just" his "cock." When she told him to "fuck off" and never message her again, he revealed the full extent of his classiness: "Your a prude," he wrote. A grammar lesson ensued and then she threatened to contact his mom, whom she found via Facebook, to show her "how you treat women." She added, "She should know how you perpetuate rape culture. I am sick of being treated like this."

According to the Daily Dot, the woman in question did indeed contact Trevor's mom -- no word as to whether she sent along the actual photo or just screen cap evidence of his textual repartee -- but as of yesterday she hadn't received a response. She has, however, received responses of a different sort. Yes, there are lots of women pumping their fists in the air and cheering her on, but her blog has also reportedly been inundated with messages like the following, "If you had/get some good dick (which you obviously haven’t/don’t) you wouldn’t be such a grammar nazi and prude." He really showed her! Once again, Internet jerks respond to a woman calling out jerks by being even bigger jerks.

I would take this opportunity to clarify dick pic etiquette (i.e., don't send it unless solicited, the end), but that would be an awfully naive interpretation of Trevor's alleged antics. I doubt that this is a case of ignorance. Most unsolicited crotch shots are an act of exhibitionism and aggression -- something akin to flashing, for cowards. Does it warrant a complaint to the sender's mom? Well, that's up to the recipient -- and, as this currently unnamed woman said on her blog, that's a warning. Technology has empowered creeps in countless ways, but it's also given their victims new power.