"The Internship" teaches Gen Xers to get along with millennials

Believe it or not, Vince Vaughn and Owen Wilson show how risk-taking Gen Xers can mentor younger people 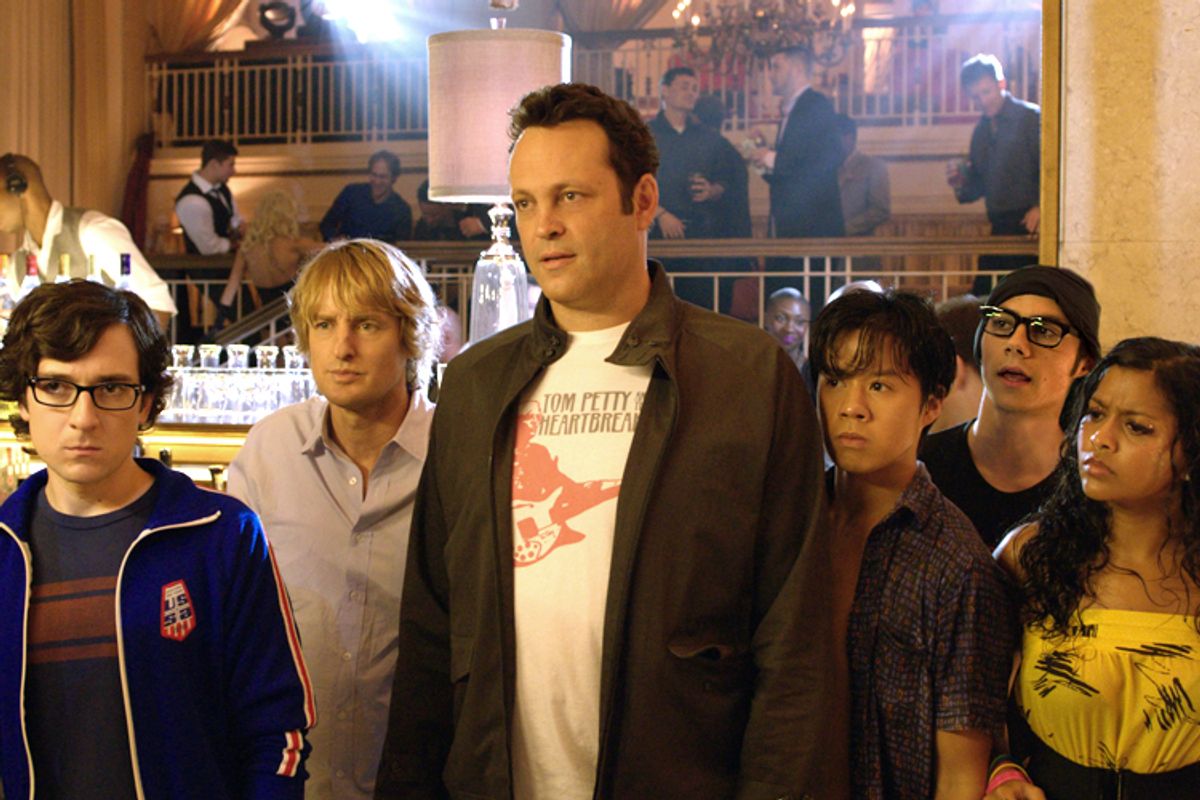 I didn't expect to like “The Internship.” For two decades Vince Vaughn and Owen Wilson represented the indulged man-children who were my peers. Their movies were larger-than-life reminders of bad dating decisions. But now that Vaughn and Wilson have aged they seem sweeter and more self-aware. And their newest film has real lessons about how my generation can get along with the ones below it.

Gen Xers grew up in an age shaped by abundance. We had no real cultural crisis. Baby boomers had Vietnam and Nixon, millennials had 9/11 and the recession. While 9/11 and the recession created a landscape Xers had to learn to navigate, those events didn’t necessarily impact how we think as a generation. In some ways we had the luxury of sleeping through our young lives. I wonder if we didn’t feel like someday always held the promise of something better. We got in debt. We stayed in mediocre jobs. We lived with our significant others for years before we married. And as we waited for something to happen, we got older. Then the recession hit and woke us up.

At the beginning of “The Internship,” Wilson and Vaughn play classic Gen Xers, salesmen living in the moment and way beyond their means. They order an excessively expensive dinner believing that a big sale will put them back on track. Instead, they lose their jobs. Suddenly, they have no prospects and the future looks terrifying.

Wilson and Vaughn’s characters don’t appear particularly bright, but they think creatively and move decisively. This, in spite of all their other limitations, gets them an internship at Google. It’s a totally implausible premise. But right now, as an underemployed Gen Xer, I need to believe in the impossible.

Rotten Tomatoes gave this movie 33 percent, so I figured there was a 33 percent chance I would like it. I loved it. Vaughn is no longer the “money baby” hottie from his youth, lassoing girls with his asshole-with-a-heart-of-gold routine. At one point in the movie his girlfriend is leaving him and he, struggling to understand why, says, “Is this because I’m too unselfish in bed, because I can work on that.” It’s a clear tipping of the hat to who he used to portray.

The millennials in the film are driven by the fear of failure. They’re practical, and because they have spent their young lives preparing to enter an uncertain job market, they haven’t learned how to enjoy themselves. Are you sensing a mutually beneficial life lesson between the generations here? The movie borders on the saccharine at times, but Vaughn, who also wrote the film, pulls it back just far enough to save it. A sincere bond forms not just among the characters, but among the actors as well. The group as a whole sets. There’s a spirit of generosity and leadership from Wilson and Vaughn. They are the veterans bringing the newbies together and, in the story, teaching them about life, but behind the scenes I wonder if maybe they weren’t also giving them a kind of family experience that made everyone’s performance better. Vaughn makes a wonderful father and Wilson a sweet, protective older brother. Gone are the creepy perversions of the past, even when Vaughn and Wilson bring the kids to a strip club (unwittingly). Instead of seeing Vaughn and Wilson enjoying “forbidden” fruits, which would have been gross especially in this context, they become chaperones. They know the dangers of excess and instinctively keep everyone safe. As Gen Xers they didn’t have anyone saving them from themselves. Here they become the mentors they wish they’d had.

I went into this movie expecting to laugh at the huge differences between Xers and millennials. Instead I saw a movie about people coming together to help each other figure out how to live better in a very uncertain world.

Many corporate consultants tell employers to pair millennials with boomers because boomers will have more patience with them. But what if, as in this movie, Xers can learn as much from millennials as millennials from Xers? When I started working with millennials I wanted little to do with them. If they didn’t like an assignment, it wouldn’t get done well. I heard, “I did my best,” a lot. I found it easier to just work on my own. Over time, though, I learned that millennials look up to authority figures because they’re used to parents and teachers rewarding them. If I'd acted as a mentor, like the Xers do in "The Internship," we might all have done a better job.

It’s time for Xers to pioneer a new kind of leadership -- one that integrates teamwork and risk-taking. The millennials I knew loved working in groups and tackling party-style challenges. They were passionate about the company and believed in every initiative. But they tended to be more risk-averse than the Xers. In "The Internship," Vaughn and Wilson integrate risk with teamwork when they steal a Google bus and take their group on a life-altering adventure through the city. That experience creates a bond that makes the whole group -- and the individuals within it -- work better. As a result they demonstrate greater ingenuity and creativity than their peers.

In “The Internship” millennials and Xers build a future together. Jokes aside, the movie could provide a blueprint for Xers and millennials to guide them to common ground as they learn how to navigate a post-recession world. Xers tend to be very self-sufficient, but I think it’s time we look to the younger generation to learn how to solve problems as a team. It may be the only way we can survive the new economic reality -- after all, few of us are going to get Google internships handed to us any time soon.

Amy Punt is a Los Angeles based writer of fiction and screenplays, and a graduate-level screenwriting instructor.