Why is the History Channel obsessed with conspiracy theories?

The cable channel's newest star thinks Obama is "a Kenyan-Muslim" 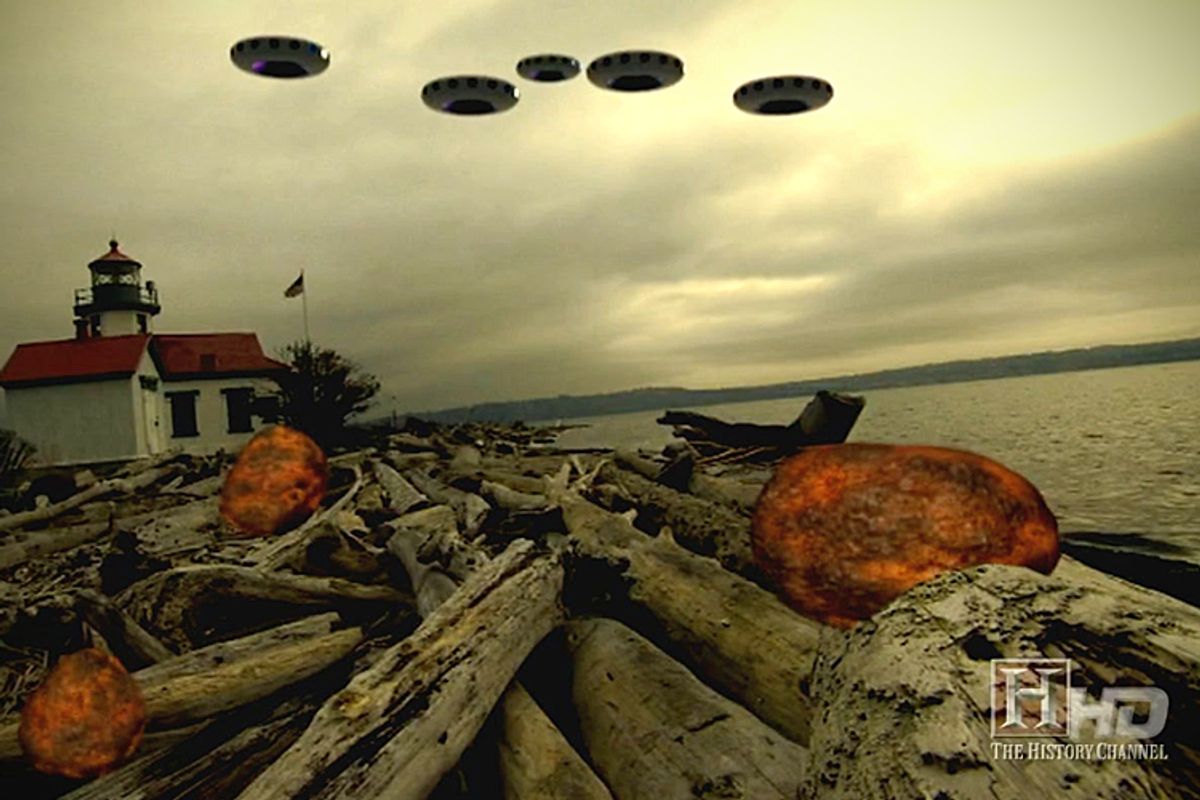 Sure, MTV doesn't play music videos anymore and the History Channel is kind of lacking in, well, history, but the cable station once known for its sober documentaries about the Civil War is doing more than just producing frivolous reality TV -- it's becoming a key platform and evangelist for baseless conspiracy theories.

Its latest offering, announced this month, cements the trend. On its face, "God, Guns, and Automobiles" is a pretty typical reality TV show. It will follow the lives of Mark Muller and his brother Eric “Mancow” Muller, who are business partners in a car dealership in Missouri. It promises "larger-than-life personality and turbo-charged attitude," according to a press release. But what will set "God, Guns, and Automobiles" apart from "Real Housewives" or "Duck Dynasty" will be its political undercurrent, hinted at in its title.

"Mancow," as he's known, is a minor far-right radio personality from Chicago with some interesting thoughts on the world, as Media Matters' Timothy Johnson documents. For instance: Barack Obama is "a Kenyan-Muslim"; pharmaceuticals are being added to the water supply to "brainwash" Americans and turn them into "zombines"; Obama drank champagne with Rev. Jeremiah Wright to celebrate the Holocaust Museum shooting; the president is planning a "Kristallnacht" against the Tea Party; and Andrew Breitbart may have been murdered by Democratic "brownshirts."

When Mancow talks about FEMA's secret concentration camps on his radio show, he says the government "scrambl[es]" his signal with a device "like a Tesla Tower."

The History Channel says this man "embodies the values and the spirit of the heartland of America."

But what's more troubling is the channel's embrace of conspiracy theory, and the imprimatur it gives them with its brand, which retains some of its former luster as a serious and scholarly platform. There are one-off documentaries, miniseries and entire shows dedicated to exploring all manners of conspiracy theories, from the JFK assassination to UFOs to Nostradamus to weather weapons and chem trails.

Take "Brad Meltzer's Decoded," of which the New York Times wrote, "[there] are the languorous crackpots who wonder if codes are embedded in their Home Depot receipts, or if George Washington's wooden leg hid an alternate Constitution. It is for this group that the series Brad Meltzer's Decoded has been conceived."

There's even a show dedicated just to "Ancient Aliens," which posits that everything from death rays to macaroni and cheese was actually invented by extraterrestrial visitors thousands of years ago and given to humans. Somebody was so perturbed by the show that he produced a three-hour documentary debunking everything in it.

For those who prefer more contemporary ETs, there's "UFO Hunters," where a team of investigators favorably investigates claims of abduction and encounters.

To be fair to History, they're not alone here. On TruTV, you can watch former Minnesota Gov. Jesse Ventura hunt down and expose conspiracy theories (and sometimes debunk them!), but History had a higher perch from which to fall.

Of course, the reason for all of this, one can reasonably assume by looking at the numbers, is ratings. History's ratings have steadily increased since it starting investing in reality TV in 2007. Last year, it replaced TNT as the No. 4 ranked basic cable channel -- quite a feat for a station that earned the monicker "The Hitler Channel" for its dreary war docs. Conspiracy theories are thrilling, with the promise of revealing secret information through complicated and compelling narratives -- there's a reason Hollywood is so enamored with them. But those are fiction while History presents itself as fact.

Whether most people tune in for amusement or because they believe is impossible to know, but there's no doubt that History's dubious shows expose people to theories they might not otherwise encounter. And, like a virus, conspiracism is very hard to contain once it's been exposed.