"Pretty Wild" features all our current plagues: Pills, the Secret and, of course, celebrity culture 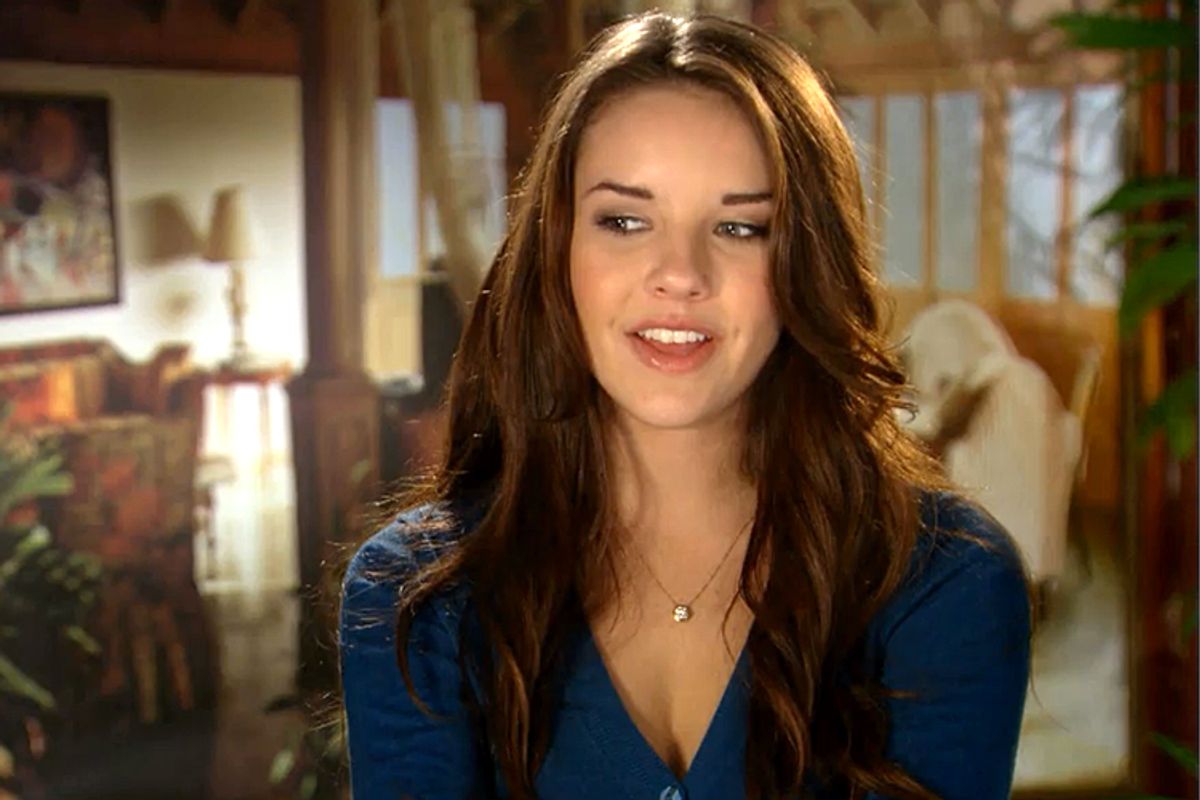 Sofia Coppola’s “The Bling Ring,” which opens Friday, is a fictional film based on the real-life exploits of a group of teenage burglars who in 2008 and '09 robbed a string of celebrities' houses, relieving them of millions of dollars of name-brand accessories, cash and, in one instance, Paris Hilton’s cocaine. The story of the Bling Ring is both timeless and timely: a group of wannabes amorally striving to level up a class -- or, in this case, a list -- are the law-breaking, vacuous relatives of such highbrow social climbers as Becky Sharp and Pip Pirrip, but these ones come with highly specific 21st century signifiers (and horrifiers): their phones, their prescriptions, their sunglasses, their googling abilities, their spaced-out California-inflected ennui and, most of all, their burning desire to be not rich, but famous.

The thieves -- great-looking middle-class kids from the Valley -- saw people like the talentless but celebrated Audrina Partridge of “The Hills” and thought, we want what she has, and then went out and stole it. The stealing is against the law, but it’s the wanting that makes their story so of the moment. They were not after anything as socially acceptable as an upper-class life, but rather the latest iteration of the American dream: notoriety. The kids stole money and Rolexes, but they weren’t in it just for the bank: They walked around in the clothes they stole as much as they fenced them. The cash they took and spent -- on more clothes. They wanted to look and feel famous.

The body of material about these burglars is copious -- a magazine article, a book, a movie, essays, interviews -- and growing every day, but one of the most revealing related documents is the short-lived 2010 reality show “Pretty Wild," currently available to stream on Netflix.  The series, just nine episodes long, is about the exploits of Alexis Neiers (renamed Nicki and played by Emma Watson in the movie) and her best friend/maybe-adopted sister Tess Taylor (renamed Sam and played by Taissa Farmiga in the movie). The show was supposed to be a comedic reality series about the duo’s attempt to make it, but in the sort of slip of timing that turns other stories into tragedies, these two young women booked a reality show just as Neiers was arrested for her part in burglarizing Orlando Bloom’s manse. Neiers' legal situation became the focus of the series -- instead of becoming like the people she stole from, she became a meme and ended up in jail.

On the face of it, “Pretty Wild” is modeled after “Keeping Up With the Kardashians” and “The Hills." It focuses on the very pretty Alexis; Tess; Gabby, their 16-year-old sister; and Andrea, their mother, a sweeter, but no less toxic version of Amy Poehler’s character in “Mean Girls.” Andrea is keen to be a friend and not a mom, incapable of setting limits or being the authority figure. A former Playboy model and spiritualist, who closely practices the teachings of the Secret, she manages Alexis and Tess’s modeling careers and takes naked test pictures of them while cleansing the house with bunches of incense, making jewelry, and home-schooling the girls. One lesson focuses on constructing a vision board about how wonderful Angelina Jolie is. She regularly leads the family in a sort of prayer circle, which always ends with a Secret-inspired call and response: “And so it is,” Andrea says.  “And so. It. Is,” the girls reply. All three of the girls have been diagnosed with ADHD, and Andrea hands out Adderall at specific times every day.

“Pretty Wild” sits at the nexus of many ultra-current plagues, including but not limited to prescription drugs, teen modeling, the Secret, helicopter mis-parenting, reality TV and, most of all, celebrity culture. It comprehensively addresses many of modern fame’s more twisted and surreal manifestations. After Alexis' initial arrest, she becomes a paparazzi magnet. Sitting outside of prison, waiting for her release, the family, who have made no attempts not to be photographed, seem near-giddy about the attention. “The press was insane,” Tess says, and it sounds like a brag. A few days later, they have grown horrified and exhausted at this invasion of privacy and try to escape the paparazzi -- with their own reality TV cameras in tow.

Having been well on their way to getting famous for being themselves before the arrest, Alexis and Tess are in communication with TMZ and “friends” with celebrities on the club scene. (If Alexis and Tess had been born half as pretty, they would still have bad parents and no boundaries, but at least they wouldn't have been invited to sit in VIP sections and do drugs and bottle service with semi-famous people just by showing up.) At one point Alexis' lawyer instructs her not to go to Cabo: Any pictures of her partying will be bad for the case. She goes anyway. She shows up on TMZ. The things she would have to do to avoid jail are at odds with the things she has to do get famous.

In the second episode Tess hangs out with the porcupine-styled singer Ryan Cabrera. They do a photo shoot with the 49er Vernon Davis and get him to come hang out with them after. Tess --  or E! -- gets DJ Paul Oakenfold to play Gabby’s sweet 16 (which she has insisted be a “neon fondue” party). Oakenfold’s performance is almost kiboshed when he recognizes Alexis as a thief. She’s mortified and cries, not for the first time, about how her legal status is ruining her life, without once showing remorse -- Neiers insists she didn’t steal anything, but was just drunk at Bloom’s house -- or making any effort to get out of the spotlight. Later, as her mother and sister cheer her on, she says she's ready to fight back, because no one knows “the great things I do for this community and this universe." Of course, no one could know this.

Midway through the season, Nancy Jo Sales, the Vanity Fair reporter who wrote the first big article on the Hilton sisters, arranges an interview with Alexis for the piece that would eventually become “The Suspects Wore Louboutins,” on which Coppola’s “The Bling Ring” is based. Alexis is eager to be in Vanity Fair: She and her mother seem to think it will be a sort of publicity coup, that they can control what kind of story Sales will write, or that she would be writing a glowing piece about Neiers in the first place. The interview, some of which appears in the sixth episode, is a reality TV restaging of “The Journalist and the Murderer." Alexis raves about meeting Sales, sure that Nancy Jo “gets her.” The piece then comes out. Alexis is gleeful for five seconds and then has a tantrum, alongside her mother, about how Sales has misrepresented her. (Andrea starts screaming, “Doesn’t she have any compassion?”) Neiers ends up leaving four messages on Sales' voice mail, a histrionic version of the old rom-com and “Friends” joke about leaving awkward messages that has become a viral video, for among other reasons, the way a drug-addled Neiers becomes fixated on the fact that she was wearing not Louboutins, but "3-inch brown Bebe heels!!!" Has anyone so craven ever been so naive? Among other things, narcissism makes you stupid.

For all that it demonstrates about the lower intestinal tracts of C-list fame, “Pretty Wild”  demonstrates even more about how reality TV gets crapped out. The show is a reality TV Rosetta Stone. It was essentially a failure on all fronts -- it didn’t bring E! ratings, it didn’t bring its participants fame -- and so in the years since it aired it has been disavowed and dissected, basically becoming annotated, a reality TV show you can fact-check against reality.

And the two look nothing alike. In reality, Alexis and Tess, who is not actually adopted, booked the show after a producer saw them filming a direct-to-video movie, in which they make out. Neiers now says that she was interested in doing the show to feed a burgeoning drug habit. According to her, throughout the show’s filming, she was living at a Best Western on Franklin and Vine, smoking $10,000 a week of oxycontin and heroin. Around episode 5, Neiers’ manner noticeably changes: She gets spacier, more addled, sleepier, and this only gets more pronounced as the show goes on. In the last episode her family stages a minor intervention for her “Xanax” use.

"Pretty Wild" ended with Neiers being sentenced to 180 days of jail time. She served a month sentence, and then was hauled back to court months later for breaking probation: She was found in possession of black tar heroin. Instead of jail, she ended up in a rehab facility. She now, at 23, is two years sober, married and has a small child. She hopes to help people like Dr. Drew does, the go-to model for "altruistic" fame-seekers. She and her mother were paid $100,000 by “The Bling Ring” for their life rights. This is the show’s happy ending. Gabby, who seemed relatively sane at 16, now instagrams about her Xanax usage, and Tess has been in and out of rehab, and has the skeletal frame of someone with serious drug issues.

The most remarkable thing about “Pretty Wild” is not its amoral characters or wild manipulations; it’s that despite all this the show still works. Reality TV is the easiest medium in the world to make fun of, but if you ever willingly watch more than one episode, you’re not just hating. Reality TV, like almost all first-person narratives, however doctored, encourages sympathy. These shows, even when they are about the criminally self-involved, trigger compassion. And so, there are Tess and Alexis, 19 and 20, vain and oblivious, but deeply connected to one another (best friendship is one of Reality TV’s great big themes). Neiers may show no remorse, but she’s aggressively, dangerously self-medicating. Andrea is a terrible parent, but being a good parent seems, truly, beyond her. Despite it all, I felt for them— if the world was full of as many easy marks, they just might have gotten as famous as they all so desperately wanted to be.