Memoirist Marie Calloway: "I don't like the privileging of other topics over sex" 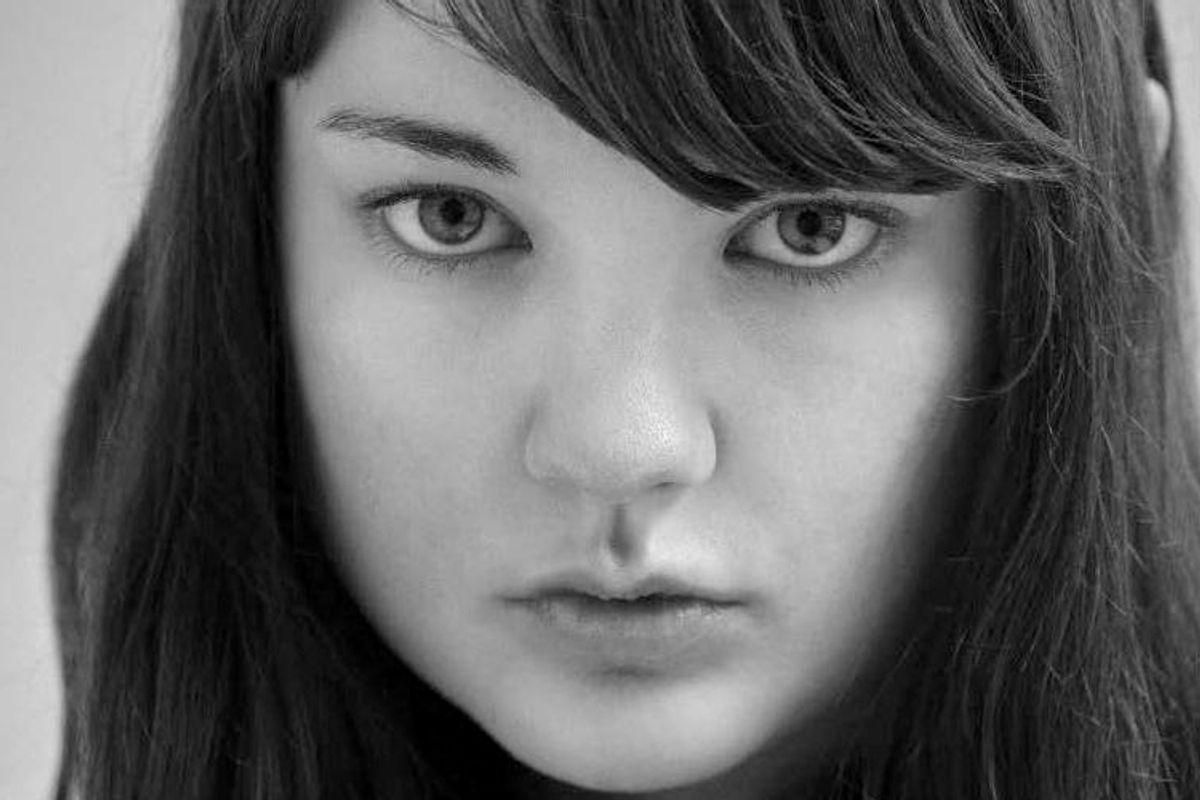 Marie Calloway is shy in person.

I'd been in contact with Calloway, who uses a pen name, about her new book, "what purpose did i serve in your life," a mélange that places first-person, memoiristic tales of sex at every level of coerciveness alongside images of her bruised body and Facebook chats in which the seduction runs both ways. Calloway first rose to repute with an essay, "Adrien Brody," that described her brief entangling with a Web writer she idolized. In matter-of-fact, flat style that will or will not be evocative depending on the reader, Calloway describes a conversation after sex:

"I hit the last guy I had sex with, too, because I was sad he didn't want to date me. It's like that again. Hitting you didn't make me feel better or change anything. It's not like I can stop you from leaving."

I'm totally powerless in the face of men.

In winter 2011, the piece sent shockwaves through the publishing industry, as documented in a New York Observer piece: the identity of "Adrien Brody" was sussed out, Calloway came in for criticism in particular for a photograph purportedly showing "Brody's" bodily fluids on her face. The piece, devoid of comments and presented as a series of vignettes (Calloway, or "Calloway," becomes a sex worker in order to buy "BareMinerals foundation and MAC lipstick and soy lattes and pizza"; she's later forced to consume her own vomit), appears in her book.

Upon release of the book, I had Facebook-chatted Calloway -- she's a voracious updater on the site and accepted my friend request immediately -- and then emailed with her. She was disinclined to speak over the phone, she told us, but would respond to email queries. She hadn't yet replied when I met her outside a book party for Tao Lin, the novelist known for tales of drug use and disaffection and a mentor of sorts for her. His encouragement of her writing career, at a time when she worries that she's only novel for her subject matter or her sex appeal, apparently shows up in somewhat fictionalized form in her story "Jeremy Lin."

I introduced myself to her; she was wearing a red dress and smoking a cigarette, and asked to borrow my bottle of water. She had her cellphone out; it was pink and bedazzled, like Carrie Bradshaw's in the first "Sex and the City" movie. I told her that I wasn't kidding in my email -- I had really enjoyed "what purpose did i serve in your life." "Enjoyed" wasn't the right word, but having been primed to expect mere provocation, I'd been surprised to actually have thought about it.

"That's funny," she said, seeming to weigh her words carefully. "Men usually don't like my book."

Calloway has been the subject of online critiques that range from savage -- just look at any of the collages she made while suffering writers' block, with detailed mockery overlaying images of her body -- to just-not-getting-it. This week, Esquire's Stephen Marche (who'd previously written for that magazine that Lena Dunham was too "plain" to be taken seriously) noted that he liked the book. But! "Personally, I find it hard to see how having your face come on by an older man constitutes an act of female empowerment, but of course I am a man."

Marche suggests that he takes every element of the book as literally true and sees Calloway as an artist who "has been submitting herself to horrific sexual experiences in order to write about them [emphasis original]."

Not that Calloway is likely to see this critique.

"I tell my publisher he's not allowed to send me even positive reviews," wrote Calloway over email. "I find it to be very boring (after a while you kind of read it all and criticism or even positive feedback becomes just the same few things rehashed endlessly, it seems) and it interferes with my creative process."

Calloway says she writes every day and has done so since childhood. She doesn't regret either her first-person work or its consequences, though -- after all, it was at least somewhat a project of persona. Contradicting Marche's read of her as a girl seeking experience at all costs, Calloway said, "I don't regret anything. I would have written things differently now, and I feel more protective of revealing certain things, but with this book I often played with things like affected naïveté."

But from what literary tradition did this writer of the Internet age, so seemingly sui generis, spring forth? Tao Lin, author of "Taipei," disavows responsibility, telling Salon, "I don't see my influence. I saw similarities with Jean Rhys, particularly 'Good Morning, Midnight,' but not strong similarities and I know Marie wasn't influenced by Jean Rhys who she hadn't read until having written most of the book."

"Are you going all the way back to Simone de Beavoir?" asked "Motherland" novelist Amy Sohn, who began a sex column for New York Press at 22. (Calloway is 23.) She described her own work: "It was a hybrid of autobiography and fiction and very diaristic ... People didn't pick up on the fact that there was a more intelligent narrator behind the action."

The comparison to HBO's revealing series "Girls" is, if not inevitable, easy. It was made in a Huffington Post profile of Calloway that she complained "painted me as a lolita sex kitten seductress" and a review on Slate that mused on "the wish that Calloway and her book simply didn’t exist, that we might all just ignore it." But Lena Dunham's series is, for all its viewers' confusion on the subject, fairly explicit: Hannah Horvath is a fictional character, and Dunham is her creator. "A decent percentage of my book is fiction," Calloway told Salon, but she didn't specify which parts were invented and which were true.

"It makes a problem of what is fiction and what is not fiction," said Gluck of Calloway's work. "Any time that you challenge social regulation, you're challenging society itself. That is upsetting to some people. To other people it's exciting. It's causing a scandal because you're challenging the ways society keeps itself proper."

"I feel like I have to fight for every inch, in interviews," wrote Calloway. "Like interviewers just want to ask me about 'what does your dad think' or ask me leading questions about some half-baked idea they have about the Internet and narcissism and kids these days." This doesn't account for the fact that those -- excepting the dad thing -- are at least more interesting than the debate over whether, per Slate, Calloway should even exist. ("Imagine someone wishing a book of literary fiction that you'd written didn't exist, and not having a reason why," said Lin.)

"Women are damned if they do, damned if they don't," said Sohn. "If they write about sex, it seems as if they slept with someone to get the job or that they were trying to get a reaction." Not that it's easy to advocate for yourself when you're young: "I realized I was going to serve a purpose for [the New York Press] at a time when no one really talked about brands, and I was finding my voice as a writer," she said.

Like Sohn, who left her own semi-fictionalized sex writing behind to write novels, Calloway is moving on; her future work, she says, will be "more mature and written in third person, more expressive and perhaps more blatantly political."

What her book most amply documents is not sex but trying to fit sex into the life of an ambitious writer. What are the boundaries? What can be disclosed? If you say everything, will anyone take you seriously? The character of Calloway is more consumed, throughout the book, with her career than with sex; it's the substance of "Jeremy Lin," which concludes with a friend emailing her, "You should stop thinking of sex as your best thing and realize, like Jeremy has, that writing is your best thing." It's the subtext of Calloway reappropriating the critiques of her -- she was, once, a writer who read her own reviews -- as well as the notion that writing about sex automatically makes the writer a character whose behavior in the real world a Stephen Marche may decode.

"I don't like the privileging of other topics over sex, like that it's somehow a lesser subject than others," said Calloway over email. "I had a question from an interviewer about how since I'm capable of talking politically or about literary theory shouldn't I do that rather than 'sex writing.'" Perhaps Calloway will be allowed to do what she wants if the book gets admirers. Or perhaps she'll be wished into nonexistence, having made her splash.

In a report of Lin's book party, novelist Miles Klee describes running away from Calloway, "whose own book [...] is doing quite well despite three publishers balking at its 'obscene' content." (This apparently refers to printing presses refusing to print the nude photos of Calloway in the book's galleys.) When Klee meets Calloway again, she reportedly "turns around and locks eyes, and I have the fleeting fear that I’m about to puke on her." As the Slate headline had it, "Men respond to Marie," or at least to an image of her that her book does not support.

The day after the party, on her Facebook, Calloway wrote: "Sometimes at a party u get really excited that a boy is talking to u, but then minute into it u remember how stupid and boring men generally are :("