Are straight actors in gay roles the new blackface?

Instead of lauding straight artists for taking risks by going gay, we should be holding them to higher standards 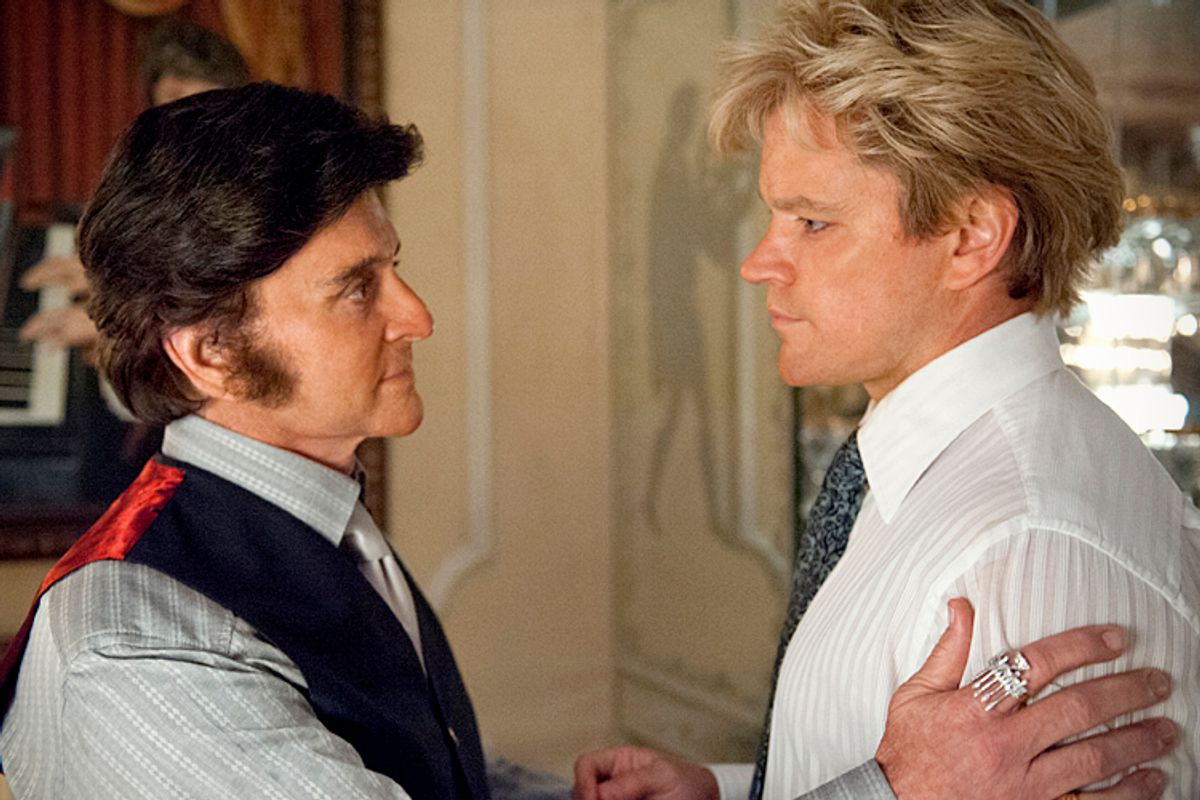 Michael Douglas and Matt Damon in "Behind the Candelabra" (HBO)
--

"Behind the Candelabra" was troubling from the start. First came the wearisome sight of Michael Douglas congratulating his heterosexual costar Matt Damon for having the “courage” to play a gay role. Then followed the repeated assurances from director Steven Soderbergh: In crafting this biopic about the flamboyant pianist Liberace (Douglas) and his decade-long relationship with Scott Thorson (Damon), he claimed to be “very conscious of trying to not look at it through any sort of political lens.” As if such political content or relevancy to the ongoing debates about marriage equality might somehow diminish the purity of his vision.

But worst of all has been the way this shrill, deeply unconvincing movie has been praised by critics for its “universality.” On NPR’s “Fresh Air,” David Bianculli talked about screenwriter Richard LaGravenese’s decision to “underscore the similarities between gay and straight relationships, not the differences.” (Bianculli went on to say that “nothing in "Behind the Candelabra" feels gratuitous” – “gratuitous,” apparently, being a synonym for “too gay.”) And in the New Yorker, Emily Nussbaum read the film as a portrait of “a typical Hollywood marriage: a powerful star spots a young blonde, drapes her in jewelry, foots the bill for plastic surgery to suit his fetishes, and makes promises of security that ping all her daddy issues … The difference, of course, was that, because they were two men, Liberace never called Scott his husband.”

“Behind the Candelabra” and its reception open up an entire can of worms about the whole notion of straight-created, gay-themed entertainment. Why aren’t we looking upon Douglas’ and Damon’s performances with the same queasiness we now regard the blackface performances of Laurence Olivier in “Othello” or Al Jolson in “The Jazz Singer”? (Like Douglas and Damon, Olivier and Jolson didn’t set out to mock an entire category of people – but they ended up there anyway.)

For that matter, why aren’t Steven Soderbergh and Richard LaGravanese being raked over the cultural coals the way director Tate Taylor and author Kathryn Stockett were with “The Help” -- a movie widely derided for sentimentalizing and diminishing the black civil rights era experience?

Short of praising straight artists for their “courage” in tackling gay material, is it now time to say thanks but no thanks – and demand that gay artists tell these stories instead?

These are alternately exciting and exasperating times for gay cultural consumers: On the one hand, openly gay actors and actresses are now commonplace -- a phenomenon that, as recently as two decades ago, would have seemed unimaginable. And whereas for decades the gay experience was framed in films and television in exclusively tragic (or, in the case of something like “The Boys in the Band,” deeply pitiable) terms, these days “gay-themed entertainment” can range from lowbrow farce like “The New Normal,” to middlebrow Oscar bait like “Milk,” to highbrow art cinema like the recent Cannes Film Festival winner “Blue Is the Warmest Color.”

On the other hand, well, there remains something distinctly hetero-normative about the way so many gay stories are being told. With its goggle-eyed attention to queer stereotype (flowing fur coats! bejeweled jockstraps!) and prurient detail (wonder no more: Liberace was a bottom), “Behind the Candelabra” frequently treats Liberace and Scott Thorson as animals in an especially glittery zoo. It also insists on processing their idiosyncratic, sexually- and generationally specific relationship in terms of our modern ideas about marriage equality – in effect, seeing Liberace and Scott as men who if they could have would have married, as opposed to men likely so damaged from decades of dissembling that no such “normal” relationship would have ever been possible between them.

To many straight people (and probably a lot of gay ones, too), these criticisms probably sound (at best) deeply ungenerous, and (at worst) doctrinaire and fascist: What right does anyone have to stop an artist from creatively empathizing with the experiences of people of different backgrounds? Besides, if straight actors shouldn’t be allowed to play gay characters then, by logical extension, gay actors shouldn’t be allowed to play straight characters – an idea that would certainly seem to run counter to most people’s notions of progress and equality.

At the same time, surely I can’t be the only gay viewer who has felt as if some of the most highly lauded performances of recent years -- Christopher Plummer as the just-out-the-closet 80-something in “Beginners”; Sean Penn as the slain gay activist Harvey Milk in “Milk”; Colin Firth as a closeted professor grieving for his lover in “A Single Man” – were impressive, yet fundamentally hollow acts of mimicry. These actors capture the looks, sounds and movements of their gay characters, but barely seem to scratch the surface of the depths of anguish, self-hatred and fear these men must have known in their lifetimes.

I certainly don’t want to suggest that heterosexual artists aren’t capable of extraordinary gay-themed works: Two of my favorite films of the past quarter-century, “The Talented Mr. Ripley” and “Brokeback Mountain,” are anguished portraits of psychological and spiritual ramifications of being trapped in the closet in a society that will very literally destroy you if the truth about one’s homosexuality – both directed by straight men, (Anthony Minghella and Ang Lee, respectively), and starring heterosexual lead actors. In the deliciously unhinged (and wildly underrated) “I Love You, Philip Morris,” Jim Carrey and Ewan MacGregor generated an ardor for themselves and each other that was both touching and hilarious – it’s a far more nuanced portrait of the same gay narcissism that feeds Liberace’s desire to remake Scott Thorson in his own image via plastic surgery.

Nor can I discount the hard economic realities of getting gay-themed stories told in modern Hollywood: Even with two heterosexual box office draws in the leads, “Behind the Candelabra” was reportedly rejected by all the major studios before finding financing from HBO. My guess is that even HBO would have balked if instead Soderbergh had tried to cast, say, Ian McKellen and Matt Bomer in the Liberace and Scott Thorson parts.

Yet as progress continues its inevitable march, this much seems certain: We are now looking at this issue from the wrong angle entirely. Instead of extolling straight artists for taking creative risks by going gay, we need to be holding them to higher-than-normal standards -- the way, say, we do when contemporary white actors employ black face, à la Robert Downey, Jr. in “Tropic Thunder,” or when white directors tackle stories about iconic African-Americans, à la Brian Helgeland with “42.”

Which is to say: If you are going to go there, you better have a good reason, and your execution can leave little room for insensitivity or caricature.

Who knows, maybe in the not-so-distant future we’ll actually find ourselves in a world where straight writers and directors actually explore and illuminate the gay specificity of their characters’ lives; a world where gay actors are considered first and foremost for gay parts. (Already there is a hint this might be happening with Ryan Murphy’s upcoming HBO film adaptation of Larry Kramer’s “The Normal Heart.” It can’t be coincidence that the cast features at least three actors – Jim Parsons, Bomer and Jonathan Groff – who have come out in recent years.)

For now, though, forgive me for looking upon a movie like “Behind the Candelabra” as more a step back than a step forward. Because as long as we‘re framing the conversation in terms of the straight man’s “courage” – and as long as straight viewers get to laugh at hollow queer stereotypes being passed off as thoughtful representations of real life  – then nothing is equal.

Christopher Kelly is a writer-at-large for the Texas Monthly.