"This Is the End": Dude, it's the apocalypse!

Seth Rogen, Jonah Hill, Franco and other stars play "themselves" in a goofy, drug-addled Rapture bromance 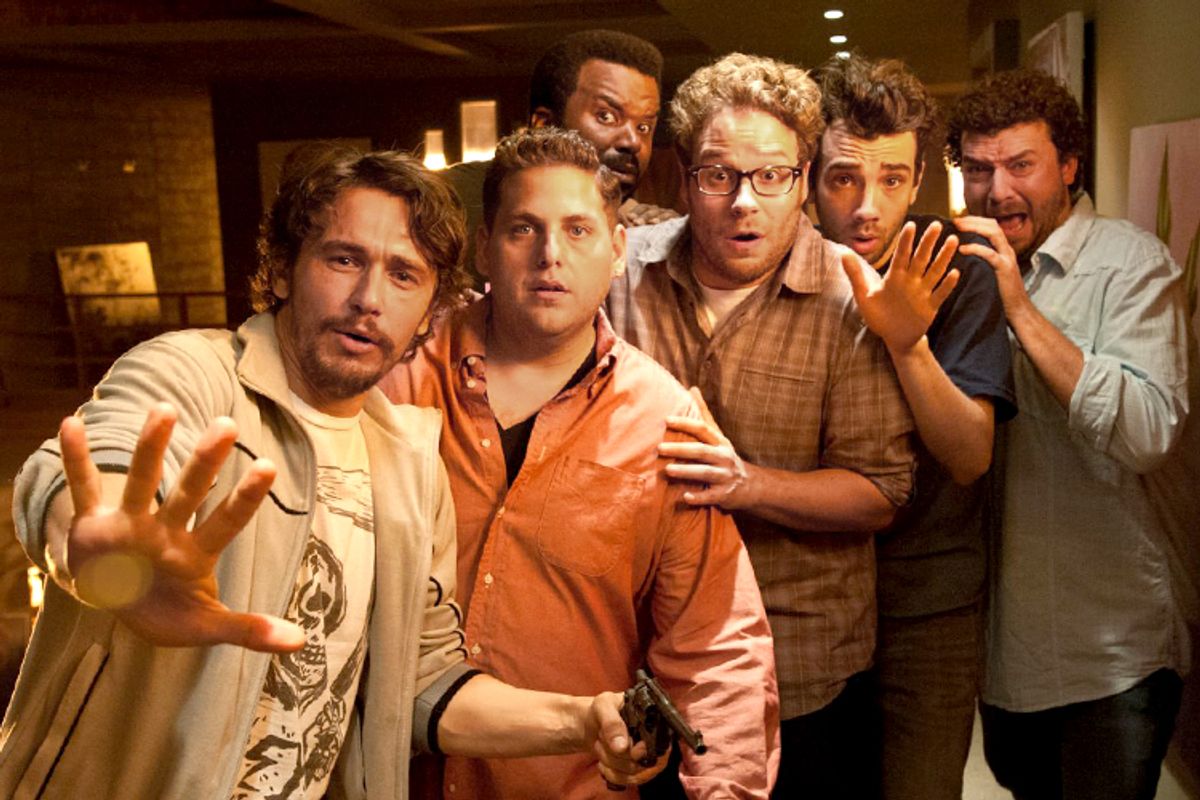 There’s a certain grade of contemporary movie comedy that feels a lot like a “Saturday Night Live” celebrity sketch pumped up to 100 minutes or so. OK, you’re right – that’s actually almost every Hollywood comedy of the last 30 years. But “This Is the End,” in which a bro-pack of young Hollywood dudes, playing themselves as weed-smoking, self-absorbed idiots, face the apocalypse at James Franco’s house (where else would it hit?), is the ne plus ultra of such films. It’s the best and funniest and most absurd and outrageous and self-referential of all high-concept, stars-playing-themselves, Jewish Rapture movies ever made. Which is a long way of saying that I enjoyed the hell out of it for a while, but it got irritating and self-congratulatory long before it was over and I desperately do not want to see it again.

I’m all in favor of movie stars making jokes at their own expense, but an entire movie based on that premise starts to seem like a suspiciously large amount of upside-down vanity. Nearly the first half of “This Is the End” plays like an uproarious game of Can You Top This? mixed with a lost episode of “Entourage,” with Franco as the pompous aesthete hosting a debauched party in a sterile Hollywood Hills mansion furnished with ghastly postmodern art, some of it his own creations. (No, it’s not really his house – the film was shot in New Orleans, mysteriously.) Any number of approximately famous people are in attendance: Michael Cera is a lecherous cokehead (who gets slapped by Rihanna); Emma Watson is belligerent and touchy; comic Craig Robinson sports a T-shirt that says “TAKE YO PANTIES OFF.”

Seth Rogen, who co-directed and co-wrote the film with Evan Goldberg (based on the 2007 short “Jay and Seth vs. the Apocalypse”), plays himself as a genial, dim pothead who’s dragging his reluctant old friend, Canadian actor Jay Baruchel, to Franco’s shindig. Everyone at the party is just a little too conscious of being nice to Seth’s not-so-famous friend from the northlands, especially Jonah Hill, who gives the movie’s most skin-crawly performance as a fussy, diva-ish collection of positive thinking and New Age wisdom. But when the largest earthquake in history strikes L.A. and Mindy Kaling, David Krumholtz and numerous minor celebrities get sucked into a bottomless sinkhole in Franco’s front yard – there’s always a silver lining! – it’s only Baruchel who understands what’s really going on. It's time not merely to take yo panties off, but also to prepare to meet yo maker.

For some reason, the arrival of Judgment Day does not involve cutting off the gas and electricity to James Franco’s house. I guess God is sparing these guys for a while so they can shoot a home-video sequel to “Pineapple Express” (actually pretty funny, with Hill playing Woody Harrelson) using Franco’s prop camera from “127 Hours.” (Mercifully, they agree not to make a sequel to "Your Highness," which would make my short list of worst movies of the 21st century so far.) Or so Danny McBride can show up, in the role of mysterious survivor with a hidden agenda, and cook up nearly all the remaining food in a show of faux-generosity. I’ve never been able to stand McBride’s obnoxious public persona, and I guess I’m not alone. His character in “This Is the End” is genuinely troubling, the disturbed, aggressive almost-friend who’s a little too willing to discuss the “rapey vibe” that emerges around Emma Watson’s unexpected reappearance. (Don’t worry; she fends for herself just fine.)

As “This Is the End” clicks along toward its intentionally ludicrous, demon-packed action finale, you can feel the central group – Franco, Hill, Rogen, Baruchel, McBride and Robinson, a little too obviously playing the “token black guy” of horror-movie lore – daring each other to go further. Which of them is willing to seem the gayest? (A tight race between Franco and Hill.) Which one will be the biggest pants-crapping coward? (That would be Rogen.) After Hill is visited at night by a growling demon with an enormous tumescent member – an experience he describes as “not chill” – we take an extended detour into “Exorcist” parody, but it’s no good claiming that the movie falls apart or jumps the shark or anything like that. There was nothing to fall apart from, no shark and not even really a movie, just a big load of steaming, semi-enjoyable, Kentucky Fried meta-meta-ness.

As idiotic summer entertainment goes, why the hell not? “This Is the End” knows it’s being idiotic the entire time, and never aspires to anything more. It delivers some reasonably good hard-R laughs without descending into the ickiest grade of contemporary humor (although I don’t know what to say about Channing Tatum’s late-movie cameo). Rogen and Goldberg want you to notice that they’re a couple of Jewish guys making a movie in which the Christian version of the Rapture comes all too literally true, but they don’t want to go further than that. (At least the vision of heaven in this movie looks a lot more fun than the ascetic beachfront wasteland seen in “The Tree of Life.”) There’s a prankish, DIY sensibility here that suggests the Rogen-Goldberg duo may be worthy heirs to their pal Judd Apatow’s mantle, but only once they get past the idea that it’s awesome to be young, rich and famous and that nothing could possibly supersede the awesomeness of hanging out with them and their young, rich, famous friends.