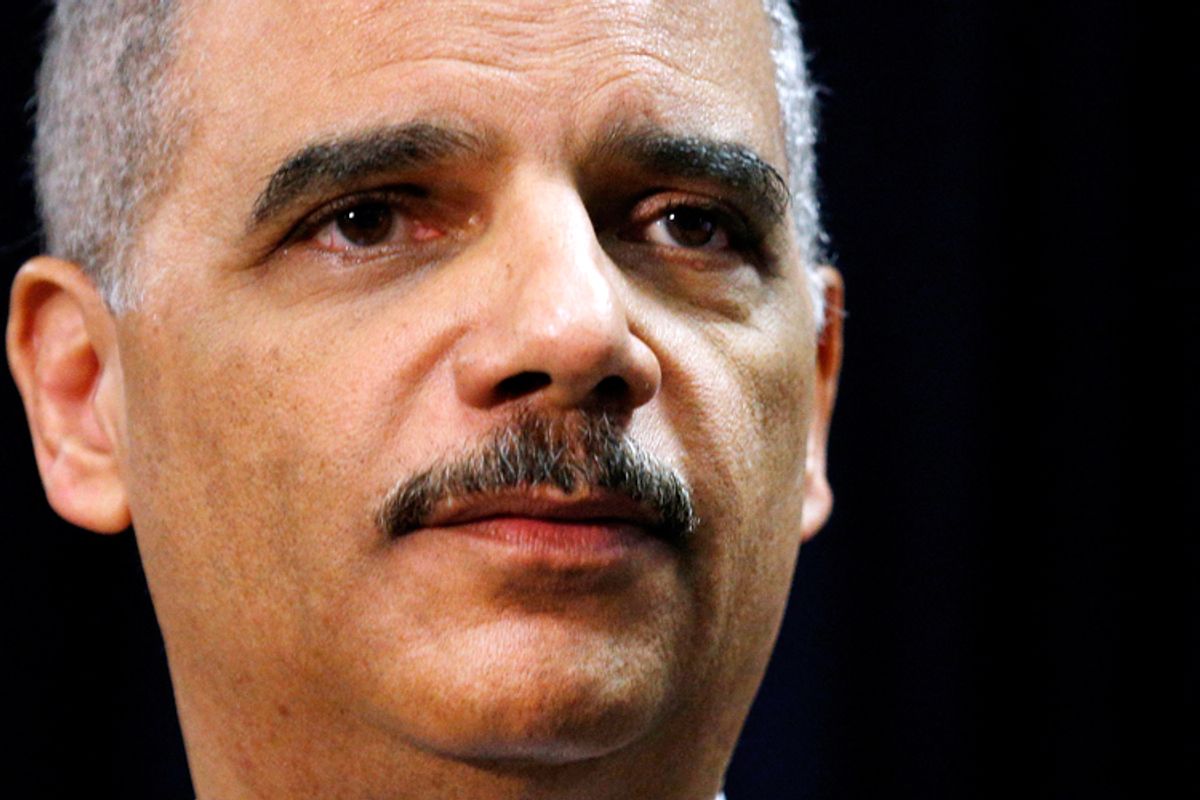 The NYPD may soon get some unwelcome federal monitors according to the New York Daily News. The issue is stop-and-frisk, the widespread NYPD minority harassment program, the constitutionality of which U.S. District Court Judge Shira Scheindlin is expected to rule on shortly. If Scheindlin finds the practice prejudicial, the U.S. Department of Justice would like her to grant the Justice Department oversight over the cops.

New York city officials were told of Holder's decision Wednesday, according to the News. On Tuesday, Mayor Michael Bloomberg and Police Commissioner Ray Kelly reportedly "vigorously objected to the plan in telephone conversations with Holder."

The News reports that U.S. Attorney General Eric Holder's office filed a brief yesterday requesting that if the NYPD loses the case and its stop-and-frisk policies are found to be illegal, "the court has wide discretion to enter injunctive relief," which "may include the appointment of an independent monitor." You can read the brief, signed by Assistant Attorney General for Civil Rights Thomas Perez, here. Mayor Bloomberg is reportedly "outraged."

The NYPD obviously needs a monitor. The city argues that the department's own internal affairs bureau is oversight enough, but the IAB has failed to uncover or prosecute an array of recent examples of police misconduct and IAB veterans and plenty of cops who've dealt with the bureau say it's slow, incompetent and bordering on corrupt. New York's Civilian Complaint Review Board is independent and thorough, but it also has no authority beyond issuing recommendations to the commissioner. A complete lack of accountability and oversight is part of Bloomberg's governing philosophy, which holds that he should be able to appoint people who answer only to him, and then those people should be in charge forever. (There are various terms for this approach.)

Eric Holder has been expressing concern about the practices of the NYPD for some time now. In 2011 he said the Justice Department was "actively looking at" the NYPD's extensive spying operation, though nothing came of the "looking," possibly in part because Obama counterterrorism adviser (and now CIA director) John Brennan supports such surveillance. In 2012 Holder met with Congressional Black Caucus leaders and made it clear that he was open to a Justice Department investigation of the NYPD's stop-and-frisk policy.

Holder's Justice Department has actually had a very impressive record on civil rights cases. His Civil Rights Division, led by Thomas Perez, has not hesitated to investigate police departments for misconduct, and it has forced reforms in cities like in New Orleans. In March of this year, Perez announced an investigation into Cleveland police focusing on excessive force. Thomas Perez is decidedly one of the best things about the Obama administration. That he'd push the Justice Department to weigh in on the NYPD case, over the strong objections of Mayor Bloomberg, is laudable, especially because Obama himself has a strange obsession with winning the mayor's favor.

What makes this even braver, if we could just this once use the term "brave" to describe a federal law enforcement brief, is that Perez is in the middle of a confirmation battle in the Senate. Obama nominated the attorney to be his next secretary of labor. Republicans have delayed and attempted to block Perez's confirmation. Harry Reid reportedly won't bring Perez's nomination to the floor until July, and Republicans will almost certainly filibuster. The problem Republicans have with Perez is that, as head of the Justice Department's Civil Rights Division, Perez has gone around aggressively enforcing civil rights laws. His work on voting rights has been especially galling to Republicans. (The other problems Republicans have with him are that he declined to treat the New Black Panther Party seriously and also they just don't want any Obama nominee, especially a properly progressive one, in charge of the Labor Department.)

It's true that Republicans these days may hate Michael Bloomberg even more than they hate Barack Obama. And they hate him because he is a proud enemy of Liberty. But they mostly all hate him for the dumbest possible reasons -- he has various convoluted regulatory plans to combat obesity! -- and not because his vast paramilitary police department regularly ignores the Fourth Amendment. That is a thing they basically like about him, because the NYPD spends so much time and money spying on Muslims and because despite supposed rise of libertarianism in the GOP, a healthy authoritarian cop-worship is still the norm. Republicans and many Democrats don't want anyone attempting to restrain Ray Kelly, even a bit.

Meanwhile, there's a mayoral election on, and this should lead to some interesting responses. The most prominent Democratic candidates are both broadly pro-Kelly, but also opposed, rhetorically at least, to stop-and-frisk, his signature policy. Christine Quinn has promised to keep him on as commissioner, a promise that all her rivals have attacked her for. Anthony Weiner has staked out a bizarre middle ground position: he would like to keep Kelly but not as police commissioner. (Sanitation commissioner?) The other candidates, all of whom have less name recognition, oppose Kelly and would like to see an independent inspector general with authority to oversee the NYPD. Conservatives would like to see Kelly himself run for mayor, though thankfully he doesn't seem inclined to do so.

The Justice Department's request will, clearly, have major political consequences in the U.S. Senate and in the New York mayoral race. Ray Kelly is rarely challenged by anyone with power, and the man has a lot of friends and admirers. It's also perhaps a reason to be thankful for Eric Holder, who is having quite a bad year so far. If this is part of how he says sorry, I'm all for it.