New CNN anchor: criticisms of network are "a sign of respect"

Anchors Chris Cuomo and Kate Bolduan on the Boston bombing, Carnival Cruise coverage, and how they'll be different 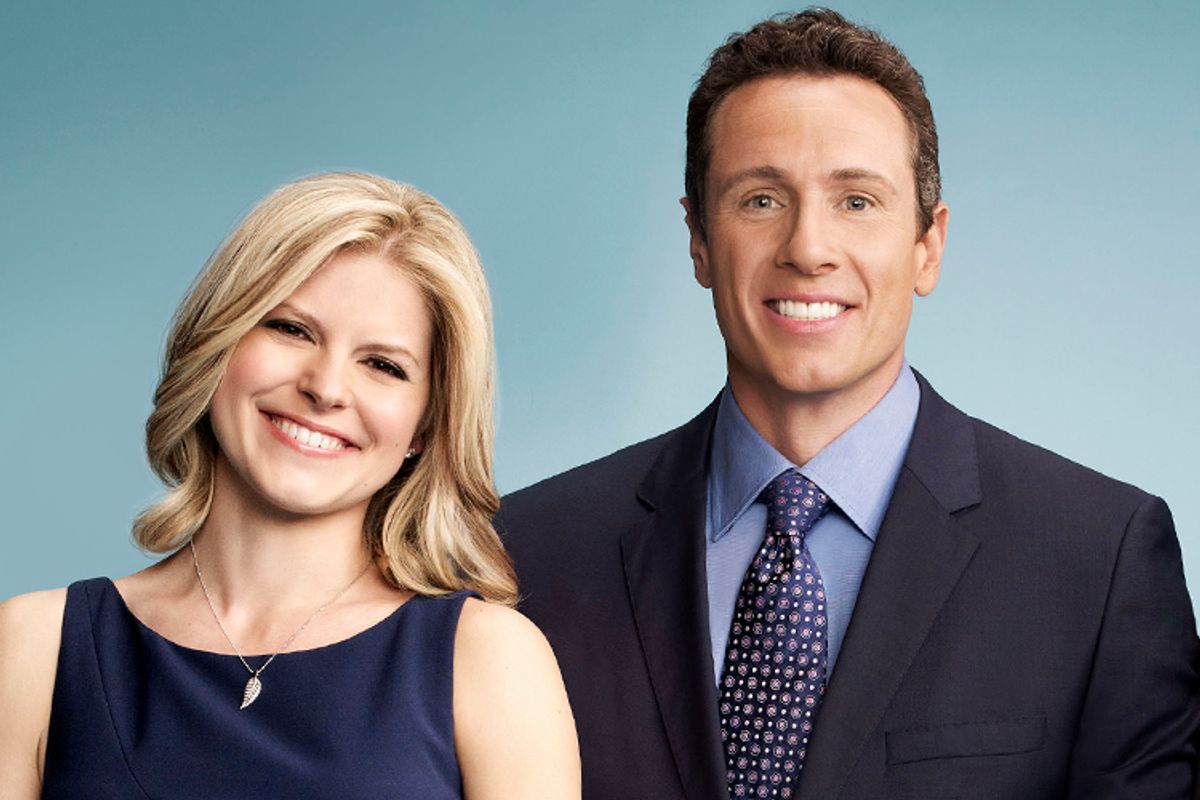 As rival channels Fox News and MSNBC have both established very clear brands with, respectively, the chummily conservative "Fox and Friends" and the sclerotic insider debate "Morning Joe," CNN's stumbled somewhat, with a morning lineup -- including ill-fated programs "American Morning" and, later, the short-lived "Starting Point" -- that haven't quite worked.

But a "New Day" has come. The network has been heavily promoting the anchor team of Chris Cuomo -- late of ABC News -- and Kate Bolduan -- a former congressional correspondent. The pair will take their seats in the early hours of Monday, despite, as both repeated in an interview with Salon with executive producer Jim Murphy, never having broadcast on-air together live even now. (No worries -- they're friends!)

CNN's historic strength -- the breaking-news ability that gets it high ratings in times of crisis -- has also come under increased scrutiny recently, with negative attention paid to a faulty scoop on the supposed Boston bombing suspect in custody (long before the Tsarnaevs emerged) and a day's worth of coverage of a stranded Carnival Cruise ship. Not that the hosts are worried. As Cuomo told Salon, criticisms of that network are "such a sign of respect for CNN. It has to be that -- there's no other explanation."

"New Day" may have a broad mix of potential stories, but CNN's lately come in for criticism of somewhat single-minded coverage of, say, the Carnival Cruise fiasco.

MURPHY: Jeff said recently about the carnival story -- if 3,000 people were trapped inside the Empire State Building, would everyone be covering that day and night? The media found it a little silly because it's a cruise ship. It was a fairly dire situation. People debate how much to cover it but it was a really important story -- thousands of people were sort of in peril. They weren't going to sink. But people could have gotten really sick if things weren't handled right. It was a great human story. The human experience and news programming is made up of thousands of things. We believe any important or interesting story can have a place here if it's right for the audience.

Does that include pop culture and sports?

MURPHY: Yes. It doesn't mean we'll have concerts. We're going to pack stories and information into this, lots of stories in an interesting way. We'll also get other things important to a lot of people. If they're not important to you, you'll get an experience you'll enjoy and be informed by.

CUOMO [returning to the question about the Carnival Cruise ship]: It's such a sign of respect for CNN. It has to be that -- there's no other explanation for the criticism except for CNN. You have media outlets criticizing media outlets for making a choice they also made. What could be any legitimate basis other than player hating? You believe CNN always consistently represents higher values. But they were using a bad example. God forbid -- someone you love was on that ship. And tell me what big stories were passed over on CNN that day. It's an impossible answer -- there were none.

It's a little bit of jealousy. Jeff locked up the one shot you needed with that helicopter. I come from a big news organization and we always looked at CNN as the gold standard. It was a little bit of hypocrisy; there was nobody who didn't cover that.

Chris, does your defense of CNN carry over to its coverage of the Boston bombings, when reporter John King was critiqued for erroneously saying a suspect had been identified before one had.

John King's one of best reporters in the business. Sources go bad. The intensity of the criticism is unfair. Life is unfair. Having the competition be the critical base is really unfair. CNN is consistently and constantly at stories that matter. I know that as someone who takes their work very seriously. I know that's how CNN is perceived. We did great work in Boston. Jeff Zucker put a lot of assets up there and kept them up there as long or longer than other outlets. We kept focus on what it took to survive that tragedy, not just focus on who did it and why. We focused on the heroism in the streets. My contention is that the term "Boston Strong" was most commonly echoed on CNN. I respect that. I like that CNN does not dwell on the misery of circumstance. I'm glad I'm here.

How is this show going to meaningfully differ from "Starting Point"?

CUOMO: My feeling is this: we've had a lot of opportunity to consider this question. No disrespect to the question, but we get asked it a lot. It's difficult to sell you on us. You have to judge us for yourself. I've never been more confident in being judged with my co-anchors. We've never been on live television together, but my confidence is complete.

A CNN show is going to be true to the brand. It's going to be an authentic morning news show, with international news, domestic news, business news.

Mr. Zucker has put people together who have the skills of broadcast and personality for morning television. There's the need for a team, a need for personality, a need for discretion when it comes to people starting their day. We'll have a bite to us. Fox has taken a side, MSNBC has taken a side -- the space for CNN is where we've occupied and where we're needed more than ever. It's for the people, taking their concerns and putting them to the people responsible. It's a big reason that I came to CNN.

So you've been watching the competition on Fox News and MSNBC?

CUOMO: It's a small business. You keep tabs because they're your friends, or your competition. But when you follow, you lose. You have to figure out what you do best. If it's news-gathering, you do that. If it's your ability to have fun, you do that. No matter how many shows there are, you can see there is a definable, urgent need for more. You see it in how people dip in and out, in the disaffection of people all over the country.

How would you have covered, say, the ongoing fallout from the NSA leaks?

MURPHY: That story is important to everybody in news. But if you've got three hours of morning news programming, you don't spend all three hours on it. A story would have to be a major, urgent story. Other people spend the vast majority of the show on a single story because it suits the talk they're having, a political one. I look at "New Day" more like a newspaper than how cable news has evolved. Interesting international ones and interesting domestic stories -- the sort that have been squeezed out of cable news. And while the networks do stories that are feature-y and fun, there's plenty of space for people to join our conversation.

So tell me a little bit about what "chemistry" means -- or why it's important -- given that you're not doing network-style cooking segments.

BOLDUAN: There's no kitchen on our set. We giggle -- it's one of those things where the only time we have to prove our chemistry [is in interviews]; it's the only situation where you have to say, "We're not fake friends, we're real friends." Viewers -- history has shown that you can't fake chemistry and viewers can see it. What viewers want in the morning is to know the people giving them the news are enjoying the people they're with and enjoying their morning. That's the relationship you have with viewers. We're very good friends.

But do your differences help determine assigning stories?

MURPHY: The one thing they have in common: they both think they're better than the other one.

BOLDUAN: We're very competitive. Chris is always ribbing me because, from my background, I always go to Washington first -- how does this play politically? He reminds me there's a lot outside DC. That's our funny inside joke. Chris, what are you stronger in?

CUOMO: I'm stronger, period. If we were live right now, I'd kick her ass all over this office.

CUOMO: We had different upbringings. I draw on the people I grew up with -- and Kate grew up in Indiana with a different background, her family did things differently than mine -- and we come at stories different ways. A lot of things will come from that -- and I don't like the word "chemistry" mainly because I don't know what it means. But more than jocularity, it's authenticity. The audience picks up quickly -- is this real? is this contrived?

You may not like what I do, but it's real. This is who I am, this is what I'm about. Having two people that respect each other but may well have different takes on situation that's organic -- it's bullshit to just say "I'm taking the other side on that." Pundits have made careers of that, fomenting for pay. But the authenticity of us being real with each other should matter.

It can be hard to change engrained viewing habits; on the broadcast side, ABC's eventual triumph over NBC happened over the course of years. How likely is it that "New Day" is a hit out of the box?

BOLDUAN: A change in the audience, especially in the morning, can be a glacial thing. If there were a perfect formula that would make people tune in all the time, I could sell that formula for a lot of money. We hope people are interested in our morning program. We know that will happen over time. We're not giving a number to achieve or a time period to achieve in. We're in it for the long haul, not to use gimmicks or a strategy. We're allowing ourselves flexibility. We're going to grow.