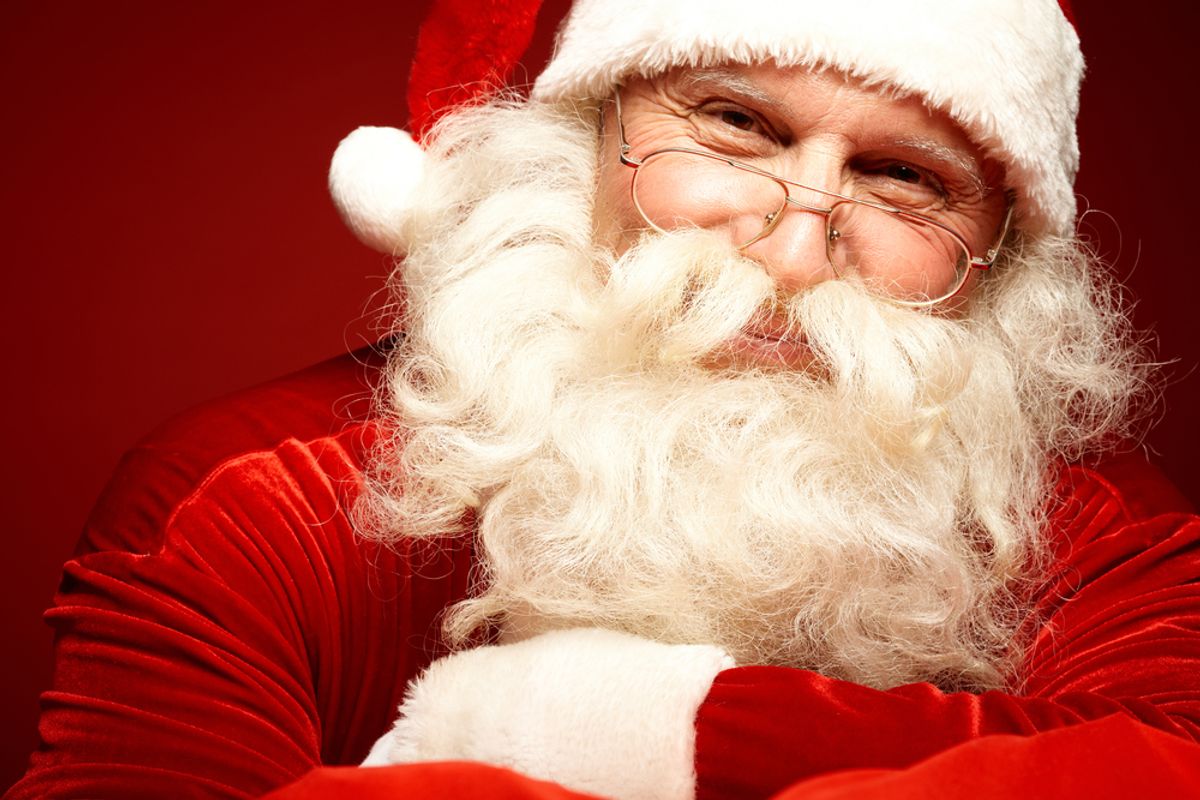 Attention, New York Times writers: We get it! Philadelphia fans have booed Santa Claus. Even pelted him with snowballs.

This happened in December 1968, when angry Philadelphia Eagles fans, possibly having had a beer or two, took aim at Santa during halftime. But the New York Times won't let the city -- or any of us -- forget it.

Whether it stems from resentment over New York not having invented the cheesesteak or just good old-fashioned hackery, the Grey Lady has consistently referred to Philly as "the city that booed Santa Claus" -- and we're talking twice in the last week. Occasionally, the reference will come up completely out of context, even when the Times isn't writing about Philadelphia at all. And sometimes, the writer even admits being unable to resist the cliche.

What really scares us about this list? It means they'll probably still be comparing things to "Portlandia" in 2052.

On golfer Sergio Garcia's reception at the U.S. Open after a racist joke about Tiger Woods:

Curtis Sittenfield, in an op-ed about moving to St. Louis from Philadelphia:

Sitting behind us in the stadium was a guy who looked to be about 20 and drunk. As people walked by, he'd yell out mocking observations about their appearances. Finally, I turned and said, ''You know, everyone else here just wants to enjoy the game like you do.'' Having moved only weeks before from Philadelphia, where Santa Claus himself was famously booed during an Eagles game, I half expected the guy to slug me. (June 9, 2013)

On a May 2012 Phillies game against the Washington Nationals:

Despite the confluence of Cinco de Mayo, the supermoon and tens of thousands of Phillies fans, the Saturday crowd of 39,496 was well behaved, if energized and noticeably tipsy. Now two generations removed from their mistreatment of Santa Claus, the marauding hordes have mellowed. Their throaty boo overtook the home crowd's cheers when the Nationals took the field, but there were no overt hostilities. (May 7, 2012)

No article about Philadelphia sports fans is complete without acknowledging their "unruly mob" reputation, name-checking incidents from the McNabb booing to their L.B.J.-era mistreatment of Santa Claus. (May 4, 2012)

On former N.Y. Giants quarterback Joe Pisarcik, who signed with the Eagles in 1980:

As it turned out for Pisarcik, Philadelphia -- where the fans once booed Santa Claus -- was Disneyland compared with the North Jersey swampland where his reputation was buried. (December 21, 2010)

On an April 5, 2010 New York Mets game against the Florida Marlins:

It has been said of Philadelphia fans that they would boo the Easter Bunny or Santa Claus -- or a Pro Bowl quarterback like Donovan McNabb. (April 6, 2010)

Vermeil played down the reputation of Eagles fans, who are known for booing Santa Claus and burning cars. Once you reach a certain level, he said, the relationship is ''lifelong'' and ''embarrassingly positive.'' (January 18, 2009)

Joe Queenan, on a potential ban on booing at Washington state sports events:

As a native of Philadelphia, a municipality whose passion for booing is unrivaled, I greet this news with a mixture of revulsion and dread. Philadelphia, coyly nicknamed the City of Brotherly Love, has a place in the national mythology as a city whose fans once booed Santa Claus at a Philadelphia Eagles game, a city where locals sometimes boo unsatisfactory airplane landings. (March 24, 2007)

The most infamous incident of Philadelphia fan behavior -- the pelting of Santa Claus with snowballs on Dec. 15, 1968 -- has brought undeserved opprobrium, according to Glen Macnow, a talk-show host and the co-author of ''The Great Philadelphia Fan Book." (December 22, 2004)

From a piece on Triple Crown contender and Philadelphia racehorse Smarty Jones:

Local boosterism is a curious mixture of pride and self-loathing. Philadelphians are more likely to defend the culinary significance of the cheese steak or the infamous booing of Santa Claus at a football game in 1968 than they are to preen about their history or great educational institutions, like the University of Pennsylvania and Temple. (June 5, 2004)

On a history of Veterans Stadium, where the event didn't even happen:

"The infamous booing of Santa Claus in 1968 took place not at the Vet but at Franklin Field, where the Eagles once played, on the campus of the University of Pennsylvania. Still, the Vet was not without its own disreputable moments, ranging from boorish to criminal." (January 16, 2003)

On Giants tight end Jeremy Shockey and the Giants' rivalry with the Eagles:

Philadelphia has always had a reputation for cruel fans. When the old Philadelphia Athletics played here, outfielder Gus Zernial was stretched out on the grass with a broken leg -- as the fans booed. And when the Eagles were playing in Franklin Field late one season four decades ago, fans pelted Santa Claus with snowballs. (October 29, 2002)

In a season preview for the 1999 Eagles:

The Eagles are going to win three games this year, and the fans at Veterans Stadium, who have booed Santa Claus, will have lots of fodder this season. (September 12, 1999)

On Mark McGwire's great response from visiting fans during the 1998 home run race:

...Philadelphia, where even Santa Claus has been booed. "I get overwhelmed every time I hear something like that. It's rare. And I don't know exactly how it started." (May 7, 1998)

On the rise of crime at Philadelphia sporting events:

Philadelphia sports fans can be so irascible that they have booed injured players while they were being carried off the field and even Santa Claus. (November 24, 1997)

There's more. But we'll have more mercy than those Philadephia sports fans, who once, you know....