Atheists: Just as obnoxious as Christians 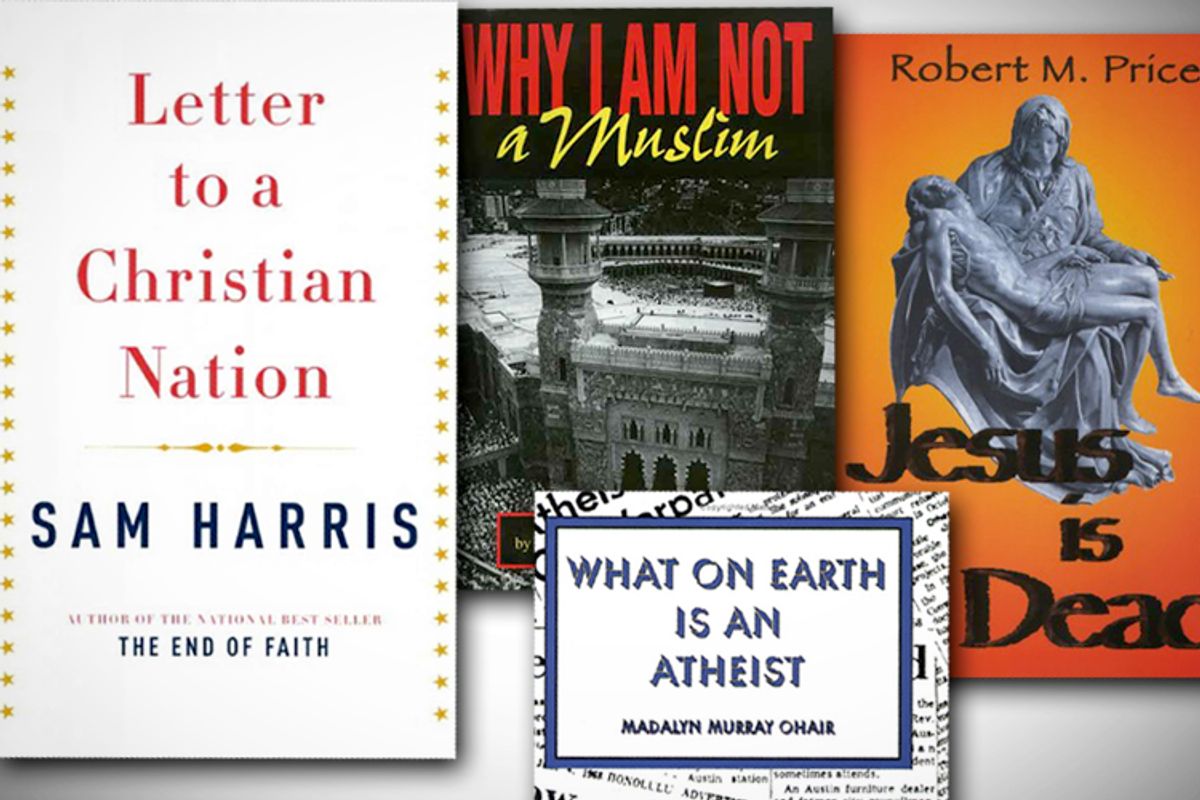 Just because you're in the right doesn't mean you have to be a jerk about it. Today's case in point: the battle going on right now in Florida's Orange County over who gets to be the biggest loudmouth.

The Freedom From Religion Foundation and the Central Florida Freethought Community had a perfectly valid point recently when they challenged the distribution of Bibles in the local high schools. Earlier this year,  a Collier County judge ruled in favor of "passive" dissemination of the Bibles, allowing them to be laid out on tables for the taking. That's a clearly stupid move; one that suggests the judge has zero grasp on the term "separation of church and state." One does not leave Bibles willy-nilly around schools, any more than one leads a Christian prayer session in school -- another battle the Freedom From Religion Foundation recently fought and won. (The victory was somewhat mitigated by a local valedictorian's defiant recitation of the Lord's Prayer during graduation anyway.)

But after "1,700 students left school with Bibles" in the wake of one of those "passive" distributions in 11 schools last winter, the atheist groups decided to make a point. They asked for permission to distribute some materials of their own, including books and pamphlets with titles including "An X-Rated Book," "Jesus Is Dead" and "Why I Am Not a Muslim." Which if I'm not mistaken is a douche move.

A district spokesman said that the groups were in fact permitted to distribute "a number of fliers critical of religion," but drew the line at the more incendiary books and materials, arguing they "could cause a disruption." David Williamson of Central Florida Free Thought Community told the local news station WFTV Thursday, "We had no intention of filing a lawsuit, and we are not interested in filing a lawsuit, but we have no other choice at this point." They just couldn't help it! In the Freedom From Religion Foundation's statement Thursday, the organization acknowledged that "distribution of limited  freethought literature was allowed on May 2, the National Day of Prayer," but said it had filed the suit "for censoring distribution of [other] freethought materials while allowing unfettered distribution of the Christian bible."

The district's haziness on what constitutes appropriate school material is self-evident. It's patently absurd and offensive that the World Changers of Florida organization, a Christian group with the hilariously inaccurate stated purpose of furthering "the biblically based founding fathers constitutional vision"  has been allowed to run roughshod over the district and impose its vision at taxpayer-funded schools. This should never have happened in the first place.

But idiocy isn't fixed with more idiocy. A petulant strategy of "You let them do this and if we can't do that we're going to sue" is absurd and immature. The Freedom From Religion Foundation's threat that the "plaintiffs intend to repeat the distribution every school year, unless the school prohibits all such distributions, including bibles" doesn't sound like a blow for freedom of expression; it just sounds whiny. And when you say you're "committed to the cherished principle of separation of state and church" and you're fighting to distribute anti-religious materials in state-run facilities, you're not separating church and state either. You're promoting an explicit agenda.

I get that a point is being made here about the selectivity of the school board's permissiveness. I get that it should not rain Bibles in schools. You know why I get it? Because I'm a concerned parent. Because I have two children I'm trying to protect from aggressive hotheads trying to shove their ideologies upon them. At their schools. I resent that, and I sure as hell don't respect that, regardless of the source.

You know that thing about being the change you want to see in the world? Yeah, that. You want to make a statement? Is there a way you could do that that wouldn't involve being all aggro toward minors? If you're concerned that inappropriate materials are being handed out to kids, you don't threaten to do the same thing. You don't get in a pissing contest over who can be more obnoxious. And you don't use schoolchildren as your pawns.