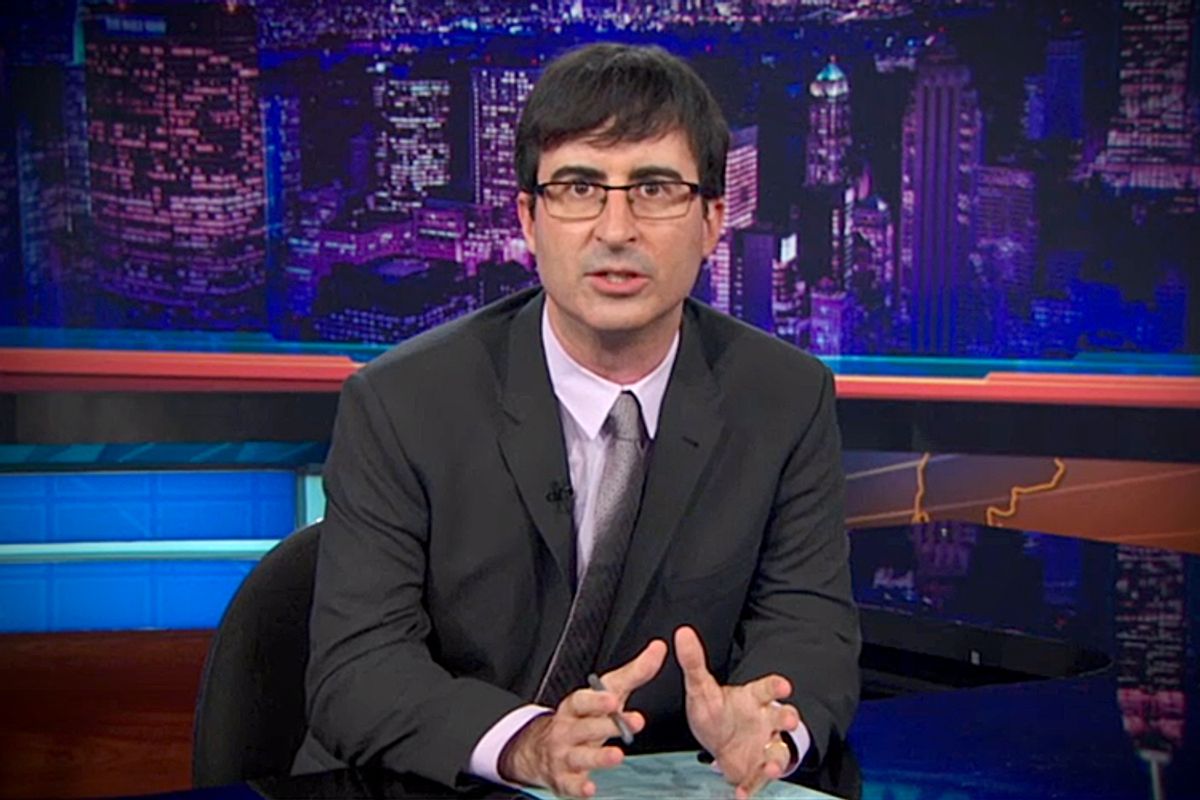 Starting this past week, and for the next three months, “The Daily Show with Jon Stewart” will be “The Daily Show with Jon Stewart” with John Oliver. Oliver, the show’s longtime foppish-haired British correspondent, had no time to ease into his new desk chair -- the unfolding NSA and PRISM scandals made sure of that. On his first day on the job, Oliver had to tackle a prototypically perfect and meaty “Daily Show” story, one full of hypocrisy, absurdity and real stakes. Sitting in his boss’s seat, he delivered a classic “Daily Show” rant that ended, as the best ones do, with a gut punch: “We’re not saying anyone broke any laws, we’re just saying it’s a little bit weird that you didn’t have to.”

A week into his tenure, Oliver is, if anything, doing too good a job. On Thursday, when regular guest Fareed Zakaria sat down for an interview he told Oliver he was “staging a brilliant slow-motion coup against Jon Stewart,” which is true not because there’s any chance Oliver won’t give the gig back in three months, but because his stint makes it clear that ‘The Daily Show with Jon Stewart” would be more accurately called “The Daily Show with a Bunch of Very Talented and Clever Writers.” (I'm still in awe of this gun phone bit.) Oliver won’t end up with his name in the title, but it will be hard to forget that it’s the writers who are the power behind the “Daily Show” throne.

There’s not much that Jon Stewart does for ‘The Daily Show” that Oliver cannot do a reasonable facsimile of. “Daily Show” correspondents, and Oliver in particular, typically play crazily opinionated to Stewart’s reasonable and level-headed, but Oliver has adopted Stewart’s incredulous perspective more or less wholesale. Oliver is slightly sharper and a smidge goofier than Stewart, and if the show had been created for him, it might be a little more sardonic -- but it was not. “The Daily Show” continues in a tone tailored for Stewart, and if Oliver is slightly less charismatic, well, he’s wearing a show measured out on another man. There are some small kinks in presentation -- Oliver steps on some laugh lines, while letting others go on too long -- but presumably these will improve in weeks to come, as will his interviewing abilities, the only area where Stewart really blows Oliver away.

On Tuesday, Oliver did a long riff about whether Americans prefer convenience or security -- the ability to buy and share everything online versus the risk of being spied on -- that required Oliver to do an imitation of Senator Lindsey Graham. Graham had just been shown in a news clip saying he was happy for the NSA to be listening to his calls, and Oliver riffed “I’m a Southern, white, Christian gentleman, and I think my privileged circumstances speak for all of ya’ll,” only to immediately self-deprecate “A Southern accent is not a club in my bag.” Far stranger than Oliver’s accent -- which was just fine, especially to achieve the desired comedic effect -- was the way this riff was written exactly as it would have been for Stewart, with no fussing or finessing because of Oliver’s Britishness.

Thus far the writers have largely ignored the larger implications of Oliver’s nationality, while still mentioning it frequently. Oliver is not hiding his Britishness -- watching him interview Armando Iannucci, the creator of  “In The Loop” and “Veep,” was to see two very specific, very similar British types geek out together about tea, MI-5 and modesty -- but none of the segments have been thematically adjusted to address it. Talking about PRISM, Oliver mentioned that the government only needed to be 51 percent sure that the subject was foreign to read all of his correspondence. The punchline was “that’s like flipping a coin, plus one percent,” and not anything that dealt with Oliver’s own foreigner's email account.

Can “The Daily Show,” a series dedicated to satirizing and ridiculing American politics and the American political media, really go for three months without acknowledging it is now being emceed by a non-American? And what does it say about the level of satire that it doesn’t hurt more when delivered by someone who's not in the family? Watching the Jon Stewart-less "Daily Show" is learning how a magic trick is done. It's impressive and disappointing all at once: That which appeared to be singular and special was always just hard work.