Russians who raised the dead

In the years before World War II, Russian scientists attempted to revive fish and dog heads, and even a human being 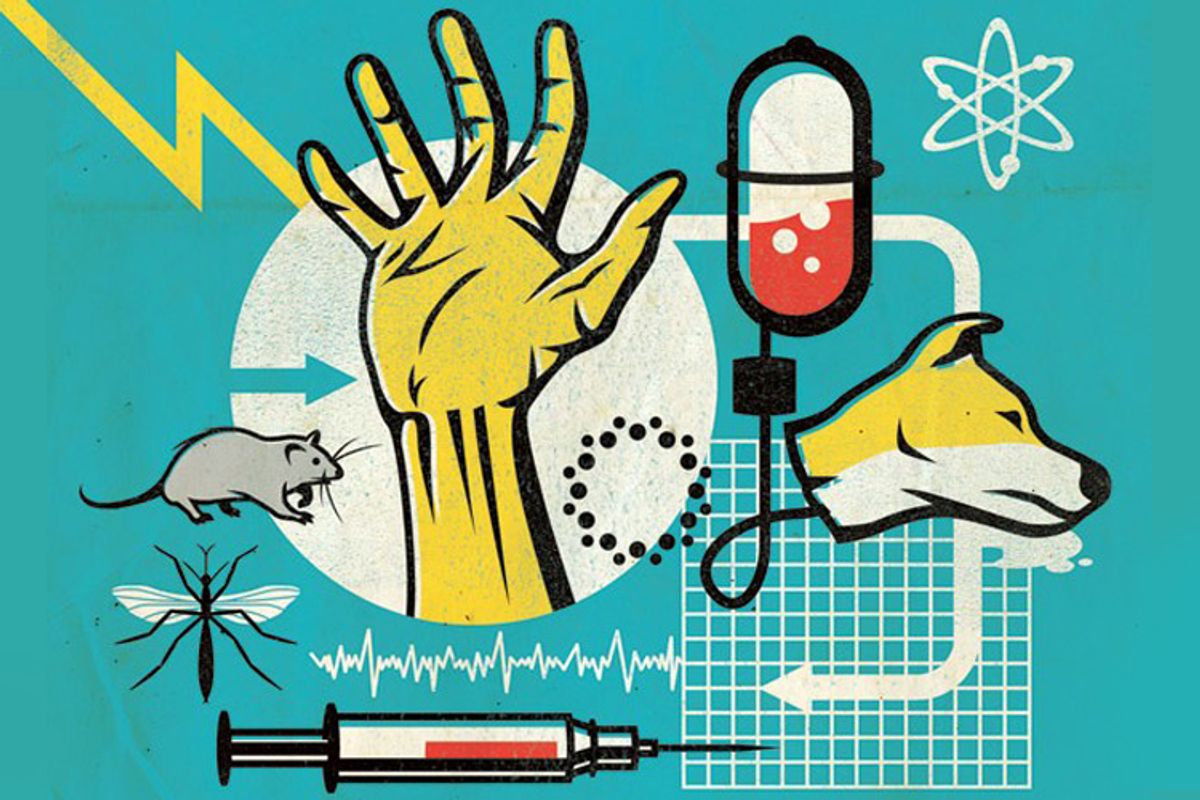 Excerpted from "How to Make a Zombie"

[Sergei] Bryukhonenko…graduated from Moscow University Medical School in 1914, just in time to be drafted into the Imperial Russian Army and bear witness to the horrors of the First World War. After the Russian revolution, he worked for several years in a large hospital, before turning to his famous experiments. At the time, the field of physiology was maturing rapidly, and Bryukhonenko decided to study the intricate workings of the organs. To do so, it was necessary to keep individual organs functioning once they had been removed from their host. In a cramped and underequipped laboratory he set himself to the task of keeping organs alive.

In May 1925, at the meeting of the Second Congress of Russian Pathologists, Bryukhonenko demonstrated the fruits of three years’ labour in the lab: the original heart-lung machine that he had built for his dogs’ heads. Using two electric pumps, the primitive life-support system drew exhausted blood from the head and deposited it in a glass chamber where it was warmed and oxygenated, then pumped back into the animal. In these early days, this “autojektor” was not hermetically sealed, and eventually the blood supply would coagulate and the system would fail. Nevertheless, Bryukhonenko could keep a dog’s head alive for about one hundred minutes. His results were met with little fanfare, however, and failed to provoke any mention in the popular press. The following year he again demonstrated the autojektor, outlining the progress he and his colleague Sergei Chechulin had made in prolonging the lifespan of their test subjects. Again, there was no coverage.

Six months later the Soviet media finally broke the silence surrounding the device, and once they did the story gathered an unstoppable momentum. Prosaic technicians mused about how it might mean that surgeons would be able to repair a diseased heart while the machine was used to keep the patient alive; the more fanciful dreamers envisioned the birth of a fullthrottled immortality engine in Bryukhonenko’s lab. Public dismay mounted over the conditions under which Bryukhonenko had been forced to concoct his life-support system, and the director of the Chemical-Pharmaceutical Institute was compelled to increase the provision for Bryukhonenko’s research to thirty thousand roubles. The grant came from the People’s Commissariat for the Protection of Health, the highest agency responsible for medical research in the USSR.

With this funding, over the next year Bryukhonenko was able to produce five papers on various aspects of autojektor experiments. He presented these at the Congress of Soviet Physiologists in 1928 – and this time, with the full backing of the Soviet government, there was no delay in provoking a media sensation. Rumours quickly circulated on American campuses that the communist scientists had succeeded in reanimating the dead. In February 1929, a student paper at the Massachusetts Institute of Technology reported the news that Bryukhonenko and Chechulin had kept a severed dog’s head alive for three and a half hours with “a queer-looking affair made of glass and rubber tubing”. Within the month, Time magazine shared a bulletin: “Vague reports have been reaching the U.S. that Russian scientists have revivified corpses”. On hearing of the invention, the playwright George Bernard Shaw quipped, “I am greatly tempted to have my head cut off so that I may continue to dictate plays and books independently of any illness, without having to dress and undress or eat or do anything at all but to produce masterpieces of dramatic art and literature.”

The ability to sustain an animal using a heart-lung machine allowed for a much more mechanistic view of life. Metaphysical concepts for separating the living and the dead – such as the Catholic soul or the Vodou nanm – were threatened with obsolescence in the face of modern medicine. If the only difference between being alive and being dead was having a heartbeat, then wouldn’t a corpse revived with a machine be alive? And why shouldn’t a machine take the place of a broken heart?

Keeping a head alive was one thing; raising the dead was quite another. Bryukhonenko was not the first Russian to dedicate himself to the problem. As early as February 1902, Aleksei Aleksandrovich Kuliabko of the Physiological Laboratory of the Imperial Academy of Sciences in St Petersburg had restarted a rabbit heart that had stopped beating forty-four hours previous, and went on to repeat this procedure on animal hearts up to five days post-mortem. The next year he procured the heart of a three-month-old infant who had died from pneumonia two days earlier. Using Locke’s solution – a mixture containing sodium chloride, calcium chloride, potassium chloride, sodium bicarbonate and dextrose, and designed by the British physiologist Frank Spiller Locke specifically to keep excised hearts pumping – Kuliabko was able to bring the baby’s heart back to life. In 1907, he developed techniques for artificial circulation that could revive a severed fish head. Between 1910 and 1913, another Russian, Fyodor Andreyev, succeeded in resuscitating an electrocuted dog by injecting a combination of saline and adrenaline into the bloodstream and then applying an electric shock to the heart. Andreyev would later become director of the hospital where Bryukhonenko spent his postwar years, and no doubt encouraged the young doctor to explore their common interest in reanimation.

In 1929, as Bryukhonenko was attaching dogs’ heads to his autojektor, Aleksei Kuliabko set aside his outmoded fish heads and prepared his most ambitious experiment yet: a secret attempt to reanimate a human. He was joined in the experiment by the “chemico-pharmacist” Fyodor Andreyev, several assistants and a man who had passed away during surgery the day before. The team arranged the corpse on an operating table and attached a tangle of pumps to the blood vessels so that they could be pumped full of Locke’s solution and adrenaline. The man’s heart heaved violently in his chest, and a wet choking sound erupted from his throat like a death rattle. Kuliabko’s assistants fled the room in terror. Kuliabko and Andreyev kept the man’s heart beating for twenty minutes before it stopped. When news of Bryukhonenko’s decapitated dogs eventually made the headlines, Andreyev could not resist hinting that the science had already moved on. He told reporters: “The principle has already been demonstrated successfully. It only remains to develop the technique for surgeons to apply practically.”

Perhaps disturbed by the experiment, or wary of the public reaction that might be aroused if word leaked out of a reanimated man, Kuliabko decided to carry out his future trials on dogs, following Bryukhonenko’s lead. One of Kuliabko’s canine subjects showed remarkable resilience: having been poisoned and revived once, it was purportedly poisoned again and left dead for several months, before being successfully revived a second time. But Bryukhonenko had heard about Kuliabko’s experiments with humans and he was ready to try his own hand at them.

He enlisted the help of the experimental surgeon Sergeo I. Spasokukotey, who had helped to engineer the network of blood banks across the Soviet Union. In 1934, showing a similar level of disregard for a person’s self-determination as he had shown for the laws of nature, Bryukhonenko attempted to revive a man who had committed suicide. Just three hours after the man had hung himself, the doctor slit open an artery and a vein and connected them to the autojektor. The machine steadily drew cold dead blood from the corpse and returned it warm and rich with oxygen. For several hours the team waited, listening to the whirr of the autojektor as the dead man’s body slowly warmed. Then a faint sound joined them in the room: a heartbeat.

As before, a death rattle gurgled in the man’s throat. The man’s eyelids fluttered open; he stared at the shocked doctors crowded around him “as a man in a stupor might do”. But the reanimation lasted just two minutes; the experimenters, “unbearably horrified” at what they had done, immediately switched off the pumps, allowing the patient to slip back into death. After that, Bryukhonenko left his experiments to the dogs.

An excerpt from "How to Make a Zombie: The Real Life (and Death) Science of Reanimation and Mind Control" by Frank Swain, out June 18th from Oneworld Publications