Cartoons with my dad

It took nearly half a century, but I finally figured out the perfect way to communicate with my 80-year-old father 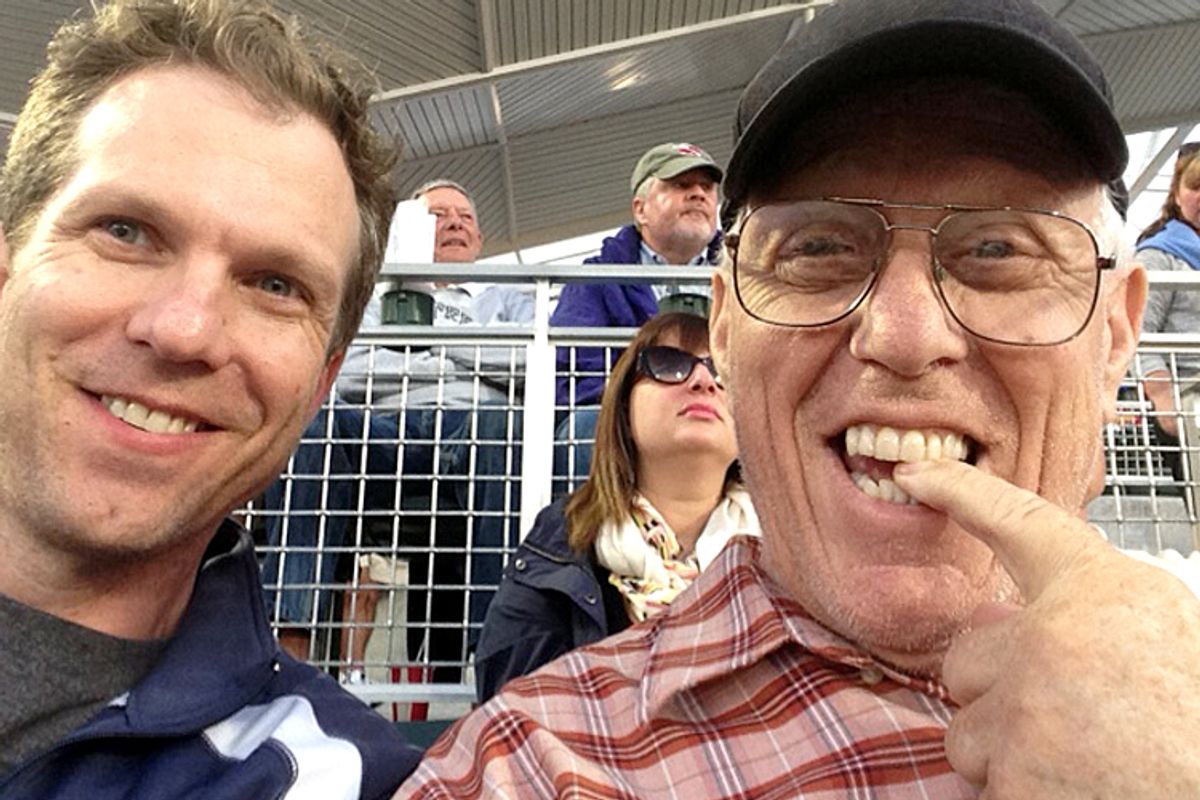 8:30 p.m. Pacific Standard Time has become my favorite time of the day. Anticipating the ping of my email is nothing short of exhilarating. That’s when tomorrow’s cartoon arrives from my 80-year-old dad, Sam.

Although I live in Los Angeles and my father now resides in Florida, we’ve been collaborating on single-panel cartoons for the past year. Monday through Friday I email him a short paragraph and then he illustrates it by hand, scans it and sends it back. Sometimes there are tweaks to be made, but for the most part he nails it the first time.

My father attended Pratt Institute on an art scholarship and started his elementary school career as an art teacher but for the past three decades or so, he’s had no time to pursue his craft for his own edification.

In 1977 my mother was diagnosed with multiple sclerosis. As her health deteriorated, they both had to retire prematurely; she because it’s hard to teach from a bed and he to take care of her. After moving from Long Island to Fort Myers my father continued to be my mother’s sole caretaker.

Art, along with my mother, remained his two great loves. Unfortunately, there wasn’t much time for the former, though there were occasional triumphs. He had an exhibit of his paintings at Queen’s College (where he used to tutor on Friday nights to make extra money), did some freelance calligraphy, and occasionally neighbors gave him a favorite photo and some cash for a pen and ink rendering. But even those moments grew further apart. My mother required constant attention – sometimes minutes, often hours -- and while my father assisted her, his paints would dry in odd or unintended ways.

On April 20, 2012, my father’s aging back could no longer withstand the rigors of lifting a (thanks to decades of inactivity) now 200-plus-pound woman out of bed, into a wheelchair, onto a toilet, then back into a wheelchair and back into a bed. Sometimes seven or eight times a day.

When the ambulance arrived that night – a routine that happened whenever she fell or had heart palpitations or stomach issues – he knew this time it would be the last night she ever spent in the house. She wasn’t coming back. She couldn’t come back. Her body wasn’t going to suddenly rebound after 35 years of not cooperating.

Since then, each morning my father drives a half-hour to see my mother in the nursing home to make sure she’s fed, changed and given her medication. He stays until he’s kicked out, usually around 8 p.m. During her afternoon naps, he pulls out the printed email of my cartoon instructions and sits down to draw, first in pencil, using my mother’s upside-down food tray as a desk. When he finally gets home after a 12- or 14-hour day, he sends me the fully inked panel and then waits patiently by the phone for feedback from me.

“That’s not what a balloon animal looks like,” I tell him. “What are you doing to me, Giant?”

My dad and I are the same height, 5-foot-10-ish, but I started calling my father that in my early 20s, primarily because his forearms make Dan Uggla’s look scrawny.

“Send me some Google images and I’ll redo it tonight,” he responds in his dry bass voice. “How’d the adopted vampire one go over today?”

“Great. Lots of likes and comments. You know, I could get you on Facebook and you could see the feedback, too.”

He may not want to get on Facebook. But receiving recognition for his art, albeit on social media sites from people he doesn’t know (who are a fraction of his age), has rejuvenated my father and given him a purpose.

“Which one do you want me to draw tomorrow,” he asks, “‘superheroes when their mothers are around’ or ‘pandas that hate each other’?”

“Do the storks and the vaginas,” I tell him.

My dad and I speak two or three times a day to discuss the shading film he buys from a place in England (to accent certain images), where each line of text should break, and the majesty of Google images. He proudly shows the latest installment to the nursing home staff, who relish a moment of levity from their emotionally and physically grueling days. It’s making his situation with my mother bearable -- for all of us. It’s enabled him to briefly take his mind off her, which is something that’s been impossible since the late ‘70s. As odd as this sounds, in my 49 years, I don’t think I’ve ever seen him happier.

Brian Frazer is the author of the memoir, "Hyper-Chondriac: One Man's Quest to Hurry Up and Calm Down," and the upcoming novel, "Over/Under." You can see the cartoons he writes that his father illustrates on www.FrazersEdge.com.