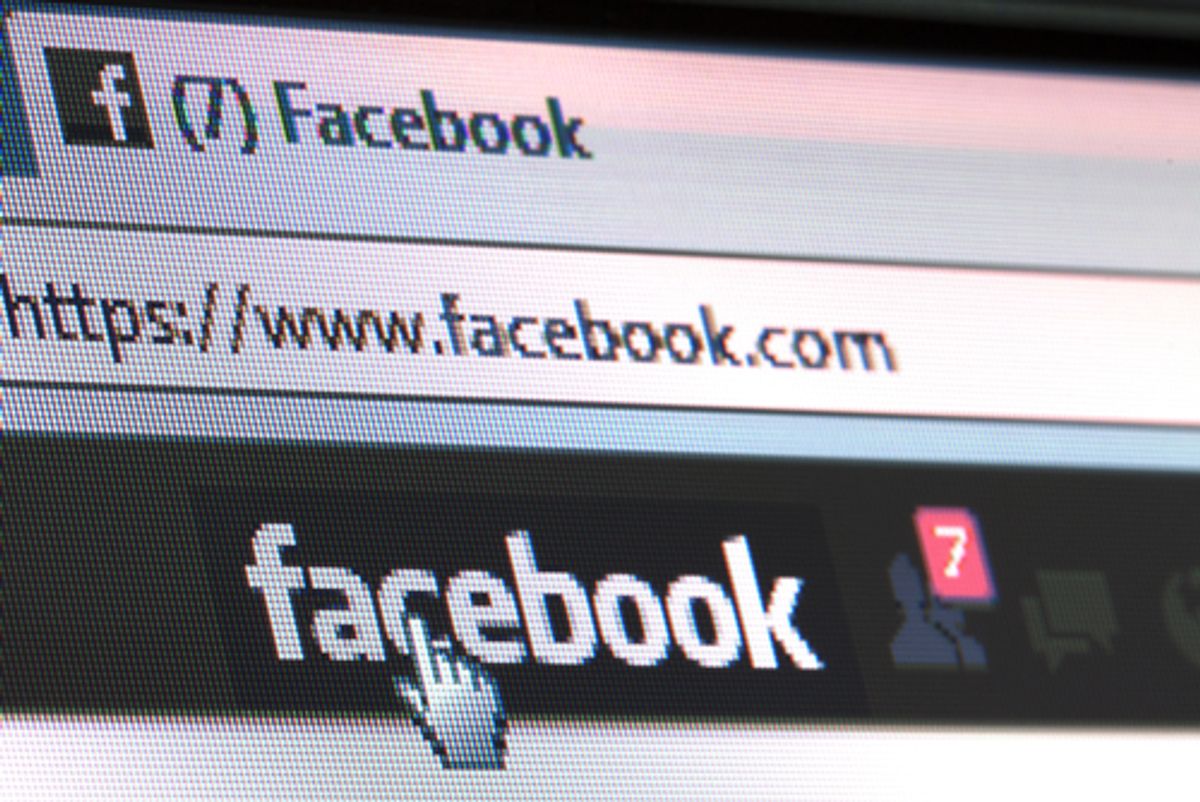 As a little girl, Jamie Cuthbertson, now 26, had a fear of being eaten by insects -- spiders especially. After her 17-year-old cousin was killed by a drunk driver, young Jamie's thoughts turned to her own mortality. She talked with her mother Pauline about how she could keep the carnivorous insects out of her coffin when she died.

Soon after, she declared to her parents at their Brampton, Ontario home that she'd come up with a solution to her phagophobia.

"I want to be cremated," she said. "That way I don't have to worry about the bugs eating me."

Jim Cuthbertson looked down at his 10-year-old daughter and reluctantly told her that there are also bugs that live in and feed on ashes.

Sixteen years later, this memory re-surfaced as Jamie sat down to prepare what will be her last digital will and testament using the If I Die app.

The resulting three-minute video shows Jamie smiling into her webcam, her long bangs framing her dark brown eyes. "A bug-proof coffin is totally worth it," she says. "You can also throw in some of my favourite things and photos of the people and animals I loved."

If I Die, there's an app for that

Yes, there's an app for that, and more than 250,000 subscribers worldwide -- about 15,000 of them Canadian -- have signed up for this new service, developed by an Israeli company, in the last year. Users create short videos, which are hosted on Facebook, and sent to friends and family upon death.

People have long been deeply concerned with their interment arrangements. The fear of being buried alive, for example, peaked during the cholera epidemics of the eighteenth and nineteenth centuries. In 1792, Ferdinand of Brunswick-Lüneburg constructed what was the first "safety coffin" shortly before his death. The German duke ensured a window was installed to allow light in, a tube provided to supply a fresh air, and instead of having the lid nailed down, he had a lock fitted. Two keys were placed in his funeral shroud, one for the coffin lid and one for the tomb door.

During and after the American Civil War, the ancient Egyptian method of embalming became acceptable to more family members who wanted to ensure that, no matter what, they could have a last look at their lost loved ones. And with the industrialization of America in the last hundred years, the traditionally plain pine coffins have made way for more durable metal caskets that were easier to mass-produce. In her seminal work The American Way of Death, Jessica Mitford criticized the funeral industry, likening it to a manipulative auto industry in the 1960s that preyed on an increasingly consumerist culture. Coffins, like cars with their showy yet non-functional fins, became more ostentatious. Exhibit A: the Beautyrama Adjustable Soft-Foam Bed Casket. The pamphlet for the Major Casket Company assures the comfort of the deceased with a bed that is height adjustable, "soft and buoyant, but will hold firm without slipping."

But with the birth of the Internet 20 years ago, and the rapid growth of online media in the last decade, our concerns and preparations for shuffling off this mortal coil are evolving as our lives become increasingly digitalized.

With such significant digital imprints, we all have to wonder: What happens to our e-trail when we die? In the last decade, more than 40 companies have sprung up to address that question. Some merely offer online memorial pages for people and pets, and others make custom-made tombstones with smartphone-readable QR codes that transport you to multimedia websites memorializing the deceased.

If I Die co-creator Eran Alfonta says he got the idea after a friend and his wife narrowly avoided a serious car accident in Italy. After their recovery, they began to think about what their kids would get from them -- beyond an insurance policy -- if they died.

"After that, my friends wanted the ability to leave an intimate video message for their kids that'd be sent to them upon their death," he says. "As painful as it may be for their children to watch, they just wanted to tell them one last time how much they loved them."

Users of the app can record videos and compose messages to be sent to select Facebook friends immediately after their physical (and digital) death, or according to a schedule of their choosing. These videos can be deleted and updated. But before they are disseminated, the user's death has to be confirmed. This verification process is undertaken by three digital trustees -- in Jamie's case these are her mother, her best friend and a neighbour -- who must each notify the If I Die app of their loved one's death. Following this corroboratory triangulation of death, the app will automatically send out an email with a video web link to the friends tagged by the deceased.

Sending one five-minute video message is free, but pay $20 to $100 and you can send more videos of up to 30 minutes each. That's a lot of potential coin when you think that three Facebook users die a minute, nearly 1.8 million people in 2011 alone.

Alfonta bristles at the notion that his company is monetizing death, making a profit out of grief.

"Casket providers, flower arrangers, crematoriums -- all of these death services are part of an industry that's existed for centuries," he says. "So we're just adding a new social-media layer to that industry."

In Aug. 2012 Alfonta's company began a marketing campaign plugging their app: the ethically questionable "If I Die 1st" competition. The first subscriber to die in the next year will get their 15 minutes of posthumous fame by having their video posted on the popular technology site Mashable. According to the campaign's website, more than 106,000 people have entered the competition as of April 2013.

As a full-time social media manager, plugged into the matrix daily for work, Jamie first heard about the If I Die app by way of Twitter: a tweeted article, in fact, that had been published on Mashable.

"Once the idea was planted, I kept thinking about the implications of something like this to our digital lives, and the lives of our friends and family," Jamie recalled on her blog. "As a social media addict and someone who is really curious about what happens to my small corner of the Internet when I'm gone, it's something I'm going to try."

Jamie decided to use the If I Die app not only to bid a final adieu to her friends and family from beyond the grave, and to ensure herself a bug-less afterlife, but to specify how her digital assets should be managed after her death.

"Claudia is in charge of deleting my Google search history, because no one needs to see how many times I googled Justin Bieber's height or looked up what the Pope was tweeting," Jamie says into the webcam. "That doesn't need to be your last memory of me, trust me."

She also requested that her Facebook and Instagram photos be salvaged and archived for her family, and her social media accounts closed.

"I don't want people writing on my Facebook wall or accidentally tagging me in photos after I'm gone -- that's a bit awkward for friends and family."

Alfonta isn't surprised at the success of his app, calling it a service that gives subscribers "some element of control over their afterlife presence" and allows them to shape how they'll be remembered.

But Adele McAlear, a senior marketing consultant and digital death expert based in Montreal, disagrees, calling the "If I Die 1st" contest a tasteless marketing ploy aimed at the younger, social media-savvy, Twitterati generation.

"God, if that video does get put on Mashable I feel bad for the family," says McAlear. "Just think, the death of their loved one is turned into a media spectacle and their death doesn't get respect it deserves."

Because the Internet is only 20 years old, many people still haven't considered how to deal with their digital deaths.

"We've had millennia to develop funeral and memorial practices in our physical world," says McAlear. "But there's no such death norms within the digital space yet.

"It's a wild west, and people are just doing their best to navigate their way through it."

There's no watchdog to vet companies to ensure that your videos and passwords will be kept secure and private, McAlear points out, and a large number of fledgling companies have also quickly gone bankrupt, leaving the subscriber again unprepared for their digital death.

McAlear says that the rapid evolution of technology is also the industry's own worst enemy. Most companies that allow you to archive your digital documents online before your death, don't curate the file formats.

"File formats become obsolete very quickly. When was the last time you opened a WordPerfect, CorelDRAW or QuarkXPress file?"

It wasn't very long ago that these were the standard file formats. Now that they're gone, the onus is on the subscriber to update them.

"It's great to have that sense of accomplishment once you've set everything up initially, but then people get busy in their lives and get negligent in maintaining their account," says McAlear. "So there's an extended commitment that's required and I don't think the average person has it in them to do that."

McAlear says that until somebody comes up with a more elegant solution, the death-service industry is going to struggle to break through. But she thinks that the new industry has a more fundamental problem: selling itself.

Some people want to treat it with every reverence, she says, whereas others are irreverent, seeing death as just an inescapable part of life and something that shouldn't be feared.

Alfonta says his company doesn't make money if someone dies -- rather, they're simply helping their clients prepare for such an occasion.

"Hearing a person's last words, things they wanted to be heard, after they've passed away has a huge power," admits Alfonta.

He says he wanted to educate the younger generation, people like Jamie, to make them see that death is something even they should start to think about.

But how do you decide what to say to your friends in a three-minute video they'll watch after you die? Jamie didn't have any deep, dark secrets to share, nor did she have any vindictive messages for anyone. She wanted to leave certain feelings behind: love, hope, happiness.

Some friends and family were unsure about her posthumous video. Friend Amy, in particular, was skeptical.

"It just seems so creepy and narcissistic," she says. "I think it would seriously just mess up the people left behind."

Jamie's mother Pauline was initially uncomfortable with the idea, but played along. When the video showed up in her email inbox, at first she couldn't watch it.

"I worried that it would just be too upsetting," she says. "I thought, you know, maybe down the road."

But Pauline did watch the video when friends told her Jamie's message was actually uplifting, and the final message is a keepsake she'll have forever, simple and sweet.

"I have no regrets with the way that I lived my life," Jamie says in the video, her gaze focused directly into the camera. "Except I would have hugged and kissed all of you and smiled more."

Death Digital Death Facebook If I Die The Tyee