To my daughter on Father's Day: Sorry I used to be a sexist 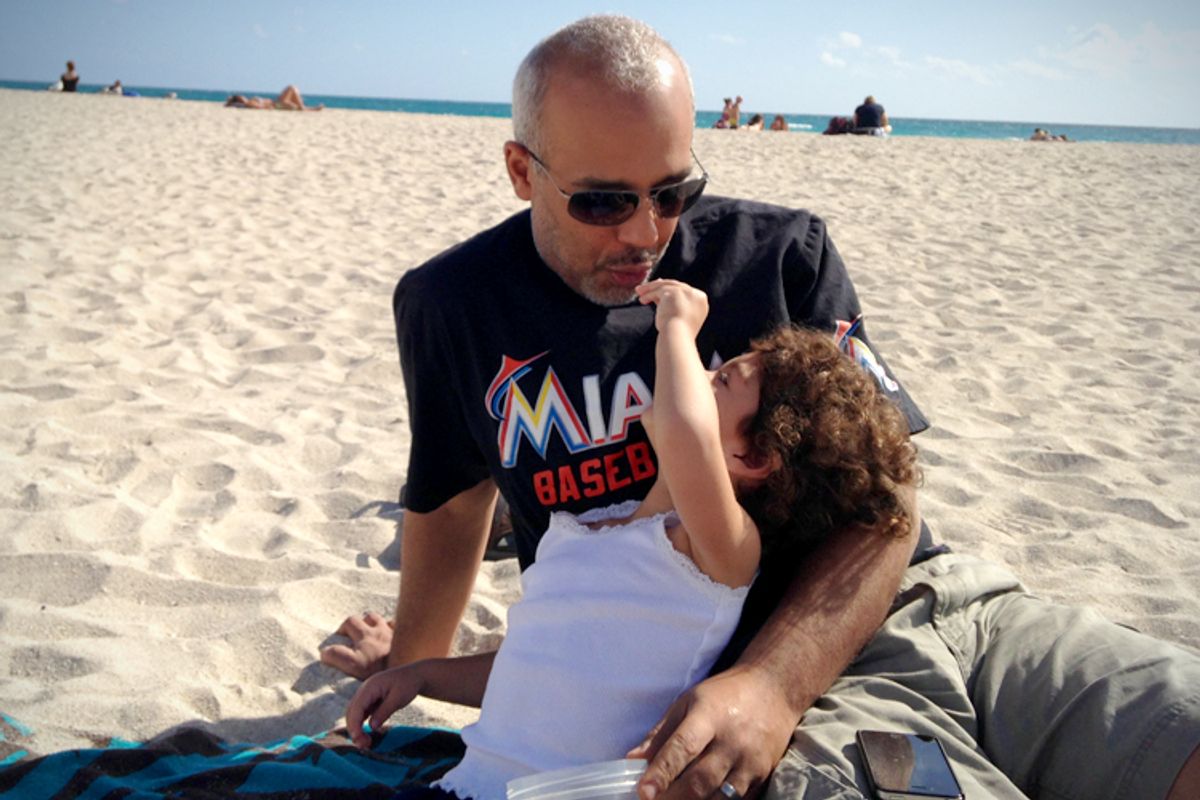 The author with his daughter
--

This weekend is Father’s Day.  On Sunday morning, you’re going to crawl into my bed and curl up next to me.  We’ll turn on the TV and I’ll feign excitement when Dora comes on, more just to watch your eyes light up.  At some point we’ll get into a tickle fight (which I will undoubtedly start).  We’ll get into a raging debate over which of us loves the other one more.

I’m going to love every minute of it.  Watching you grow up has been the purest pleasure in my life to date.

Which makes it even more jarring to admit that I was once a sexist.

Oh, don’t get me wrong.  I’m not talking about your run-of-the-mill, woman-hating misogynist who believes God made him superior to the fairer sex.  I’ve always hated that guy.

Instead, I was the guy who didn’t even notice all of society’s subtle sexist behaviors.  Sometimes I participated without realizing.  It wasn’t until I spent months traveling around the country with Hillary Clinton, and then later becoming your father, that I began to see all of this.

The constant stories about Hillary’s hairstyle or pantsuit color, but never about Obama or Biden’s tie color or haircuts.

The questions Sarah Palin endured about whether she could do the job with small children at home, when not one male candidate ever had to answer similar questions. (And it is not easy for me to defend Sarah Palin!)

The sophomoric giggles from late-night talk show hosts about a woman soccer player ripping off her shirt in celebration that got almost more attention than the championship she had just won.

The cable news host who commented on how good women politicians look “for their age.”  The beauty pageant that asks us to judge which young woman looks best in a bathing suit.

It was everywhere.  And it made me mad.

So I pledged to do my part to make sure you always knew that you were an equal to the boys you saw every day.  (Personally, I think you’re superior, but that could just be the dad in me talking.)  I wanted you to never feel discouraged, to know you could do whatever you wanted, and to live a life without this subtle sexism.

The problem is, society is sending you mixed messages.

We tell girls they can be whatever they want when they grow up.  So why are so many people still telling women that they can’t balance career and family?

We tell girls that they can succeed if they work hard and be themselves.  So why is it that a woman in business or politics is seen as cold and harsh if she doesn’t show emotion -- but seen as “emotional” or manipulative if she does?

We talk about creating economic opportunities for women.  So why are we still debating whether they should receive equal pay?  Even worse, why are we having a national conversation over whether women in the workforce hurts our “social fabric”?

We tell girls that they can grow up to be soldiers and serve our country.  So why have we allowed a military culture where some of the greatest threats women soldiers face are from their male colleagues?

We tell young girls that they shouldn’t ever rely on a man for their happiness or success.  So why are we telling them that they need to rely on a bunch of men they’ve never met to tell them when they need an ultrasound, where to put it, and what other healthcare decisions are best for them?

As a father, I’m horrified by all of this.  You deserve better from all of us.

A few years ago, Hillary Clinton talked about putting 18 million cracks in the ultimate glass ceiling, so that someone might soon finally break through.   I look forward to witnessing that with you.

But what I really want is for it to seem completely unremarkable to you.

In the past few weeks you have told me you wanted to be a doctor, a pilot, a face-painter, a pizza maker and a princess.  Some days you want to be all of them.

And the most awesome thing is that right now you believe you can be.

That list will only grow in the coming years.  I can’t wait to watch it grow, and see where it leads you.

I only have a few things I want to add to the list.

I want you to be happy.

I want you to truly do and be whatever you want.

I want respect and equality to be the status quo.

I don’t want there to be any more glass ceilings for you to have to break through.

I hope that someday, when both you and your younger brother get older, you’ll read this and neither of you will have any idea what I’m talking about. That would be the best Father's Day gift ever.

Mo Elleithee is a Democratic political consultant in Washington, DC, and was traveling press secretary for Hillary Clinton’s 2008 presidential campaign. More importantly, he is the father of a three-year-old daughter and three-month-old son.