What being an unmarried mom taught me about fatherhood 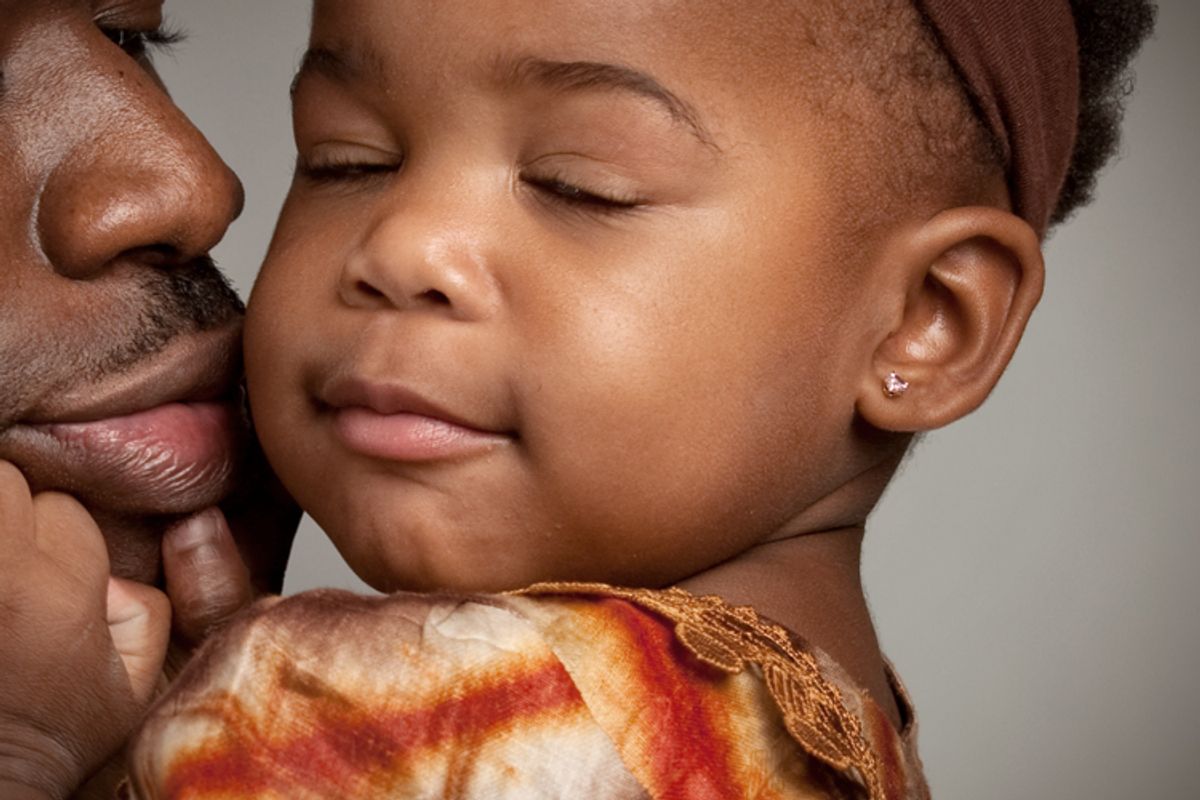 When I was 29, my father taught me to drive. We were, for the first time in my life, residing in the same city. My parents never married. I'd spent most of my formative years in Maryland while he lived Michigan. Though I was loath to admit it, even to myself, I expected our relationship to grow a great deal, now that we were in such close proximity.

Learning to drive under his tutelage took about two months. He'd guide me to school parking lots and down side streets, stepping out of his Jeep to instruct me on the turns and reverses of parallel parking. I'd fluster easily, like a teenager, hoping to get a nod of approval. Most of the time, I got it, and when I did, I'd beam.

Never had he felt more like a traditional dad to me than during those summer noons and dusks. And despite his oft-expressed love and his pride in all my successes, never had I felt more like his daughter.

Outside of driving, I saw my father once weekly or biweekly on average for the whole four years I spent in his city. Growing up, we saw each other far less, and I learned quickly to adapt to long absences. Even with him nearby, I was still falling back on my old habit of denying that I wanted more of his attention than I was getting. We'd closed the physical distance, but I couldn't cross the emotional canyon.

I’d be remiss if I didn’t admit that this distance has affected my approach to men as partners and parents. That I was still pining for more of my father at 29 (and pretending both to him and myself that I wasn't) isn't lost on me. But it wasn't until I became an unmarried mother myself that I understood just how much pretending we ask ourselves and sometimes even our children to do. We insist that we'll be fine -- and for the most part, we will be. But we're so intent on proving it to everyone (especially ourselves) that we keep silent about the days when we're not, the days when some cooperation and attentiveness isn't the same as enough.

When my daughter turned two, I started Beyond Baby Mamas, an online support and advocacy group for single parents of color. I thought I was doing so just to connect with other unmarried black and brown parents; I am only just realizing how much I was also motivated by my upbringing as the only child of unmarried black parents.

Never has that been clearer than this week, as our site posts essays and interviews with minority fathers. Our Affirming Black and Brown Fatherhood Series is not only shedding light on the experiences of minority men adapting to fatherhood -- it's also teaching me why it's so important not to pretend.

In his piece for us on Monday, poet Roger Bonair-Agard wrote of finding out his casual partner was now expecting their child:

Faced with an unplanned eventuality, we both made very empowered choices. She wasn’t waiting to hear what I wanted to do, and one can surmise that at that moment she was quite willing to get on with her life with a baby even if I had said I wanted nothing to do with it. Indeed, I felt in that moment empowered to do that if I wanted.

The scene felt immediately familiar, with its insistence that once an unmarried woman decides to give birth, she's fine doing it on her own. Expectant mothers shimmy into the uncomfortable armor that idea provides -- and their partners don't stop them. After all, it makes them feel more like involvement (or noninvolvement) is a choice.

In part one of its Ask a Black Father segment, the web series "Mommy-in-Chief" features a panel of three fathers who share their insights. One of them, Saquan Jones, said something I found curious: “You don’t love your child unconditionally until it’s your decision to have a child.”

My first response to Jones's statement was blatant, scoffing offense. Then I realized it bothered me so viscerally because it’s felt so true in my own life and in the lives of many of the women I've met through Beyond Baby Mamas.

Unmarried partnerships are forged through myriad circumstances. Some couples never discuss kids before conceiving one. Some meticulously plan them for a foreseeable future that comes sooner than they'd hoped. Some outright didn’t want or plan kids together but were open to them in general.

We all want to believe that, no matter the circumstance, a man will immediately cotton to the idea of unplanned fatherhood, particularly if the mother isn't conflicted. It's considered noble, an instant acquiescence to women's rights and choices. Because it's expected of them, reluctant fathers may pretend they're on board initially and slowly absent themselves later. Or they may be vocal about their dissent, at the risk of being dismissed as deadbeats who both woman and child would be fine without.

My partner fell into the second category. He was not ready. And I was appalled that, at 30, he wasn't ready. I attached every negative assumption I could to that confession: he never loved me; he'd lied when we'd talked about our imagined future family; he was running, and men who run from the idea of pregnancy simply aren’t to be respected.

I told him as much. "We'll be fine with or without you," I heard myself say, steely and deluded. Just like I was, I added silently. He shut down, and I shut down. We didn't talk again for months.

For families with fathers who are entirely or intermittently absent, Father’s Day is fraught. It can make mothers and children and even the absent fathers themselves defensive. Or indifferent. Or defiant. Or angry. Black families feel the force of those open emotional floodgates more often than most.

Deciding how Beyond Baby Mamas would approach the holiday, in light of that, was tricky. As a support community for unmarried parents, how could we celebrate the fathers who are involved without alienating the many families where fathers are not?

Our answers began with honesty, with accepting that, even for men who once believed that walking away was a viable choice, staying is still cause for celebration. It began with shuffling off our armor, admitting our vulnerabilities, confessing that though we may have adapted well to absence, what we really wanted was not to be “fine” without fathers. What we wanted were reasons to tell them we're glad and grateful and perhaps even relieved that they stayed.