Schieffer on Snowden: This kid is a jerk because Dr. King and 9/11

Old man does not care for young whistle-blowing "narcissist" 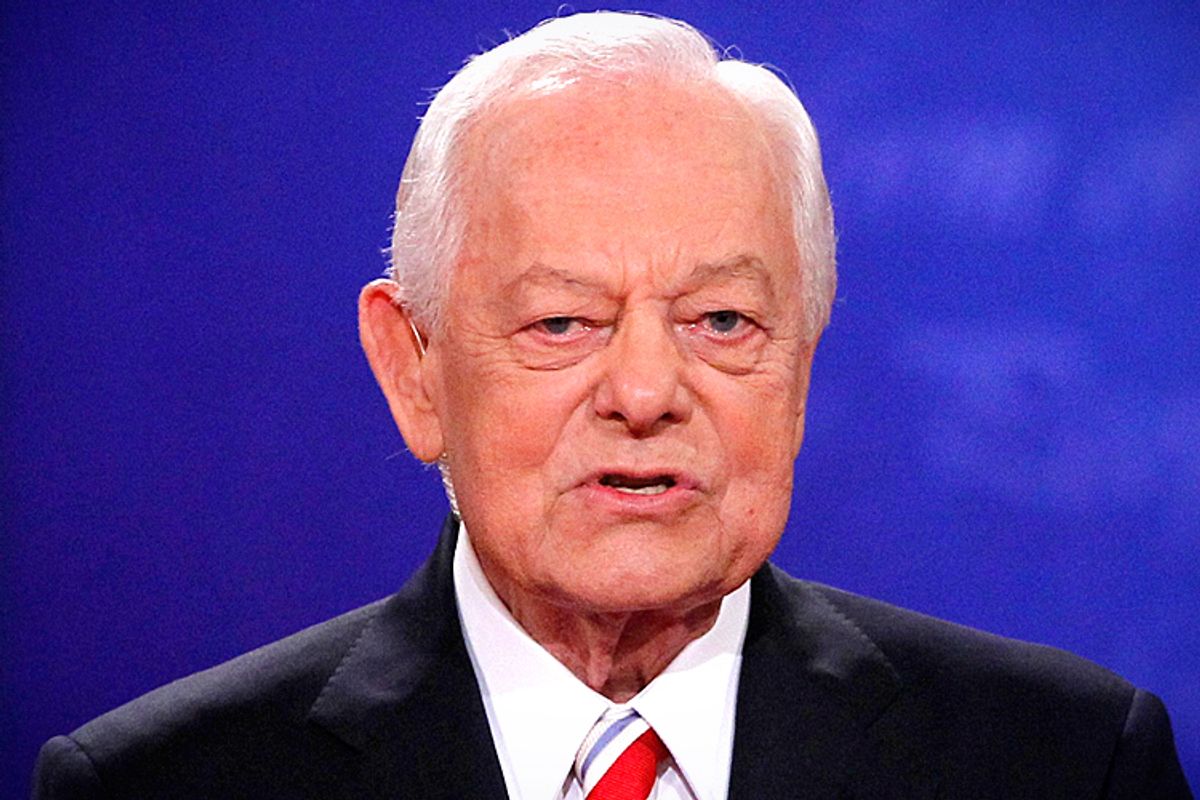 Kids today! That is basically CBS "Face the Nation" host Bob Schieffer's "take" on Edward Snowden, the notorious leaker of American government surveillance secrets who is currently in hiding somewhere overseas. Bob Schieffer delivered his verdict in a brief comment yesterday that CBS immediately blasted out to everyone. In the patois of the shameless traffic-baiting Web: "Bob Schieffer Destroys Edward Snowden in 90 Seconds."

It is always interesting to see what subjects "objective" press figures like Schieffer feel comfortable expressing personal opinions about. Schieffer would never have expressed explicit support or disapproval of, say, the Senate comprehensive immigration reform package. He wouldn't give an endorsement in a domestic election. But on this issue, Schieffer feels free to align himself with the state and against the state's enemies. It isn't a particularly surprising expression of allegiance, but it's still useful to be reminded that many of our most Serious Journalists think of themselves as a partner, and not adversary, of power.

Schieffer's primary issue with Snowden, and it is a common enough one, is that Snowden left the country rather than face prosecution here at home following his leak.

For one thing, I don't remember Martin Luther King Jr. or Rosa Parks running off and hiding in China. The people who led the civil rights movement were willing to break the law AND suffer the consequences. That's a little different than putting the nation's security at risk and running away.

"China" is just shorthand for "the enemy." "Putting the nation's security at risk" is a claim that ought to require a bit more evidence -- or any evidence -- to back it up. Schieffer also declines to mention that Snowden "ran" not merely to avoid prosecution, but also because he believes (rightly or not) that his life is in danger, not just his freedom.

I know 11 people who died or lost a member of their family on 9/11. My younger daughter lived in Manhattan then; it was six hours before we knew she was safe. I'm not interested in going through that again.

The comparison to the heroes of the civil rights movement seems mostly like an expression of Schieffer's belief that heroes should be sepia-toned martyrs. (And would Scheiffer call the tens of thousands of black American expatriates living in France before and during the civil right era cowards?) The reference to 9/11, though, is just an offensive non sequitur. "You're no Dr. King, plus Never Forget" isn't really a serious argument, and it's certainly not the argument of someone who could be swayed by logic. The only reason to even bring up 9/11 is to announce that you don't care what the government does, as long as it's in the name of "security."

I don't know yet if the government has overreached since 9/11 to reinforce our defenses, and we need to find out.

If only there were some way to find this out, right?

What I DO know, though, is that these procedures were put in place and are being overseen by officials WE elected, and we should hold THEM accountable.

Here's where we run into some trouble: The activities of the NSA are so highly classified that members of Congress have no clue what it's doing. The government's interpretation of surveillance law is itself secret. "Oversight" by Congress is effectively impossible when Congress doesn't know what's going on, and it's hard for voters to hold anyone accountable when they know even less.

I think what we have in Edward Snowden is just a narcissistic young man who has decided he is smarter than the rest of us.

And so a man who's spent 44 years appearing on television for a living uses the minute allotted on the program he hosts for him to share his self-evidently important thoughts on world events to accuse someone else of narcissism. Though the key word isn't "narcissistic," of course, it's "young." This is Schieffer's argument: In his day people who opposed the government did so correctly.

I have already said that I am totally uninterested in whatever moral judgments political pundits feel the need to cast when it comes to Snowden. The dime-store psychoanalysis that aging establishmentarians have repeatedly engaged in, absent all but the sketchiest of biographical information, has thus far only illuminated the resentments and fixations of the pundits.

It's apparent that Snowden is an alien to them, and they can understand him only in terms of idiotic newsweekly Generation Gap nonsense. He is a millennial, he is selfish and lazy and narcissistic. It's just privileged old men projecting their hatred and resentment of a younger generation onto a convenient representative. David Brooks thinks Snowden is alienated and solitary, "a product of one of the more unfortunate trends of the age: the atomization of society ..." David Brooks thinks this because he is attached to the idea that "the atomization of society" is a Big Problem. Schieffer thinks Snowden is a "narcissist" because, you know, the kids today, they're all narcissists.

We actually don't know shit about Edward Snowden's inner life. The one interesting piece I've read on the man as a person -- interesting because it is based on actual documentary evidence and not projection, and because it is written by someone who actually knows and understands the milieu in which Snowden lived -- is John Herrman's analysis of Snowden as a product of Internet forums. It's quite possible to argue that Snowden should be in jail, or that he didn't reveal anything worth revealing, or that he has gone too far, without turning into a caricature of a hectoring adult from a '60s teen beach movie, but very few pundits have thus far been able to do so.

If you want to watch the opposite of Schieffer's "destruction" of Snowden the narcissistic twerp, USA Today gathered three experienced intelligence professionals -- all former NSA officials who also saw abuses and eventually went public with them -- to see what they thought of Snowden. All three agreed that Snowden performed a public service. All agreed that he did the right thing. They aren't all united on whether Snowden is a "hero" -- William Binney is concerned with what he may be sharing with China -- but, crucially, they all did what Schieffer wanted Snowden to do: They made their complaints internally, according to what is supposed to be the proper procedures. And all were ignored, marginalized or punished for doing so. The proper procedures didn't work.

That's the news here, and that's what we're supposed to be debating: not whether this guy is a self-important asshole, but what he told us about how our government is acting and whether the safeguards in place supposedly to prevent abuse are functioning at all.