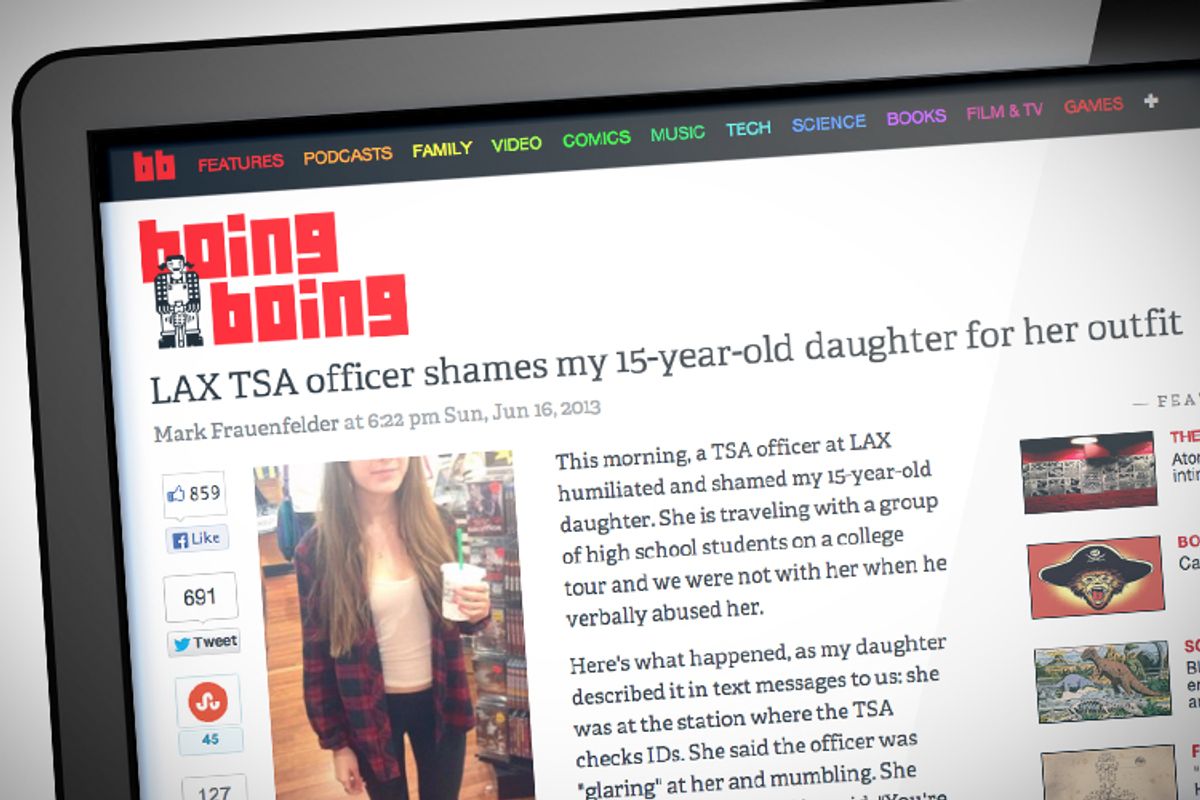 The NSA may be reigning champs among the Creepy and Invasive Government Agencies, but let it not be said that our stalwart Transportation Security Administration workers aren't doing their part to make us shudder, one gross person, one repulsive comment at the time.

When Boing Boing and MAKE editor and beloved Internet happy mutant Mark Frauenfelder's teenage daughter was flying through Los Angeles Airport Sunday, she says a TSA agent had some unsolicited wardrobe advice. She texted her father that the agent was "glaring" as he was checking passenger identifications and mumbling in her direction. He then reportedly told her, "You're only 15, COVER YOURSELF!"

Next time, government-issue creep? Pick on the offspring of someone who doesn't have a huge social media reach and decades of professional credibility. As Frauenfelder pointed out to his audience Sunday on Boing Boing, there are two things incredibly wrong with this exchange. First, as Frauenfelder demonstrated via a photo of his daughter from the airport, the girl was wearing a tank top, flannel shirt, and leggings. If this is the TSA's version of problematic attire -- in Los Angeles by the way -- have a great summer, everybody, because the fashion police are ON IT. Second – and more important – hey, screw that guy. Frauenfelder says, "It's none of his business to tell girls what they should or should not wear. His creepy thoughts are his own problem, and he shouldn't use his position of authority as an excuse to humiliate a girl and blame her for his sick attitude." And once again, world, this is why Mark Frauenfelder is pretty much more awesome than anybody. Frauenfelder adds that he and his wife, Carla Sinclair, met with TSA agents at LAX and they are investigating the incident, and that the supervising officer was "apologetic, concerned, and professional."

An adult scolding a teenager for her clothing may not seem like a big deal. But when viewed in the context of that constant noise that girls are subjected to -- the judging and the putdowns and the entirely inappropriate sexualization -- yeah, it's very much a big deal. It's part of the culture of aggression against girls and it's not OK. Frauenfelder tweeted Sunday, "It really shook her up to have that sicko in a TSA uniform get angry at her because he has a problem." And as Babes in Toyland bass player and Project Noise executive director Maureen Herman wrote on the A Is For… blog, "Things like this need to matter, because they inject shame (or try to) in a young woman who is just living her life."

That's it. It's pretty simple. Not all acts of aggression are equal. And one rogue jerk isn't everybody. But our daughters deserve to be able to travel through the world without guys in uniforms making inappropriate comments at them. And they deserve parents like Frauenfelder, who validate their concerns and support their right to not put up with sexist BS. It's how we build a better world for all our girls. By speaking up. By not being afraid. By refusing to be shamed.