A head trip to a haunted recording studio

Part tribute to 1970s Italian horror and part Lynch-style art film, "Berberian Sound Studio" is one of a kind 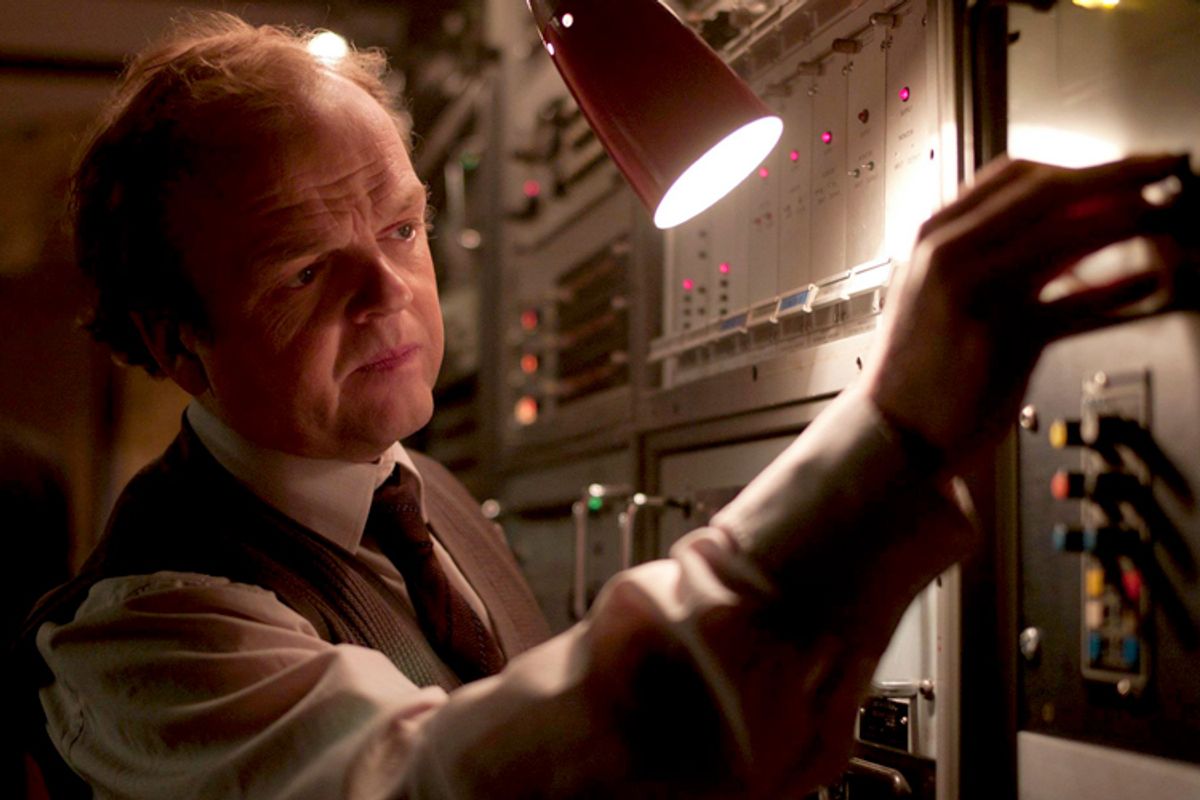 In one direction, British writer-director Peter Strickland’s peculiar and powerful movie-geek head trip “Berberian Sound Studio” is a tribute to the gothic and grotesque Italian horror-thriller genre of the ‘70s and ‘80s often called “giallo.” (In Italian, that word is applied to any kind of crime thriller, regardless of origin; the local variety is often called “thrilling all’Italiana.”) It’s about a mousy English sound engineer called Gilderoy, played by the always-terrific Toby Jones, who is hired, under mysterious circumstances, to come to Italy to work on an especially gruesome sub-Dario Argento giallo titled “The Equestrian Vortex,” which seems to involve Satanism, human sacrifice, rape by goblin and lavish scenes of inquisitors torturing witches.

But anybody hoping to watch such a film will be disappointed by “Berberian Sound Studio,” which has no actual violence or sex and is better described as a half-experimental mixture of dark movie-movie comedy, disorienting soundscape and inquiry into the boundaries of identity. Yes, go ahead and heave a heavy sigh: This is an art film that has played the New York and Toronto film festivals, albeit one with horror-movie undertow and a horror movie’s sense of pace. Indeed, Strickland references both Ingmar Bergman’s “Persona” and David Lynch’s “Lost Highway” in a hallucinatory scene in which the haunted sound studio shows Gilderoy a film of himself getting out of bed, shot only seconds earlier, which then catches in the projector, burns and disintegrates, destroying the wall that protects his work from his life.

Other than the opening credits and a few murky seconds of what may be a rape scene, we never see any of “The Equestrian Vortex” – although you could say that Strickland disassembles this imaginary giallo and shows us its components. We certainly hear a great deal of the movie; “Berberian Sound Studio” may be the finest tribute to the old-school cinematic craftsmanship of the sound mixer and Foley artist I’ve ever encountered. (No date is specified, but I’m guessing the film is set around 1978, so digital effects and recording techniques are far in the future.) We watch Gilderoy tear radishes from their stalks (the sound of a priest pulling out a witch’s hair in clumps), smash overripe squashes and melons on the floor (a woman falling to the ground from a great height), and record the voices of ordinary-looking middle-aged Italians who specialize in the hooting and yowling sounds made by witches, goblins and demons.

If the atmosphere inside the Berberian studio is often intensely sinister and lugubrious, most of what actually happens there remains in the realm of comedy. The power keeps going out without warning, giving Gilderoy an opportunity to demonstrate how you make a UFO sound with nothing but a light bulb and a metal comb. The film’s supposedly legendary director, Santini (Antonio Mancini), is a dapper lady-killer with a wolfhound and no apparent interest in anything except the supply of lissome actresses, while his hard-boiled deputy, Francesco (Cosimo Fusco), is stern without being competent. Gilderoy is so uncomfortable around women that he can’t even tell that the lovely Elena (Tonia Sotiropoulou), an actress noted for her eardrum-shattering scream, is sweet on him.

Maybe his missed opportunity with Elena drives Gilderoy around the bend, so that it seems like letters from his mother back in England leak into the script of Santini’s ludicrous movie, or that he’s momentarily catapulted into a wonky nature film about the Surrey Hills in southern England. But “Berberian Sound Studio” is both ominous and open-ended; fans of the giallo aesthetic and Lynch’s intense atmospherics will appreciate this utterly distinctive movie best if they go in seeking neither clarity nor explanation. Gilderoy is visited over and over again by spiders, like many a giallo protagonist. But he’s a gentle if troubled soul, and instead of taking them as satanic manifestations, he captures them on pieces of paper, opens his window, and lets them go.