War against Issa heats up, as Cummings releases IRS transcript

Slamming Issa's leaks, Cummings says “not one witness…has identified any involvement by any White House officials” 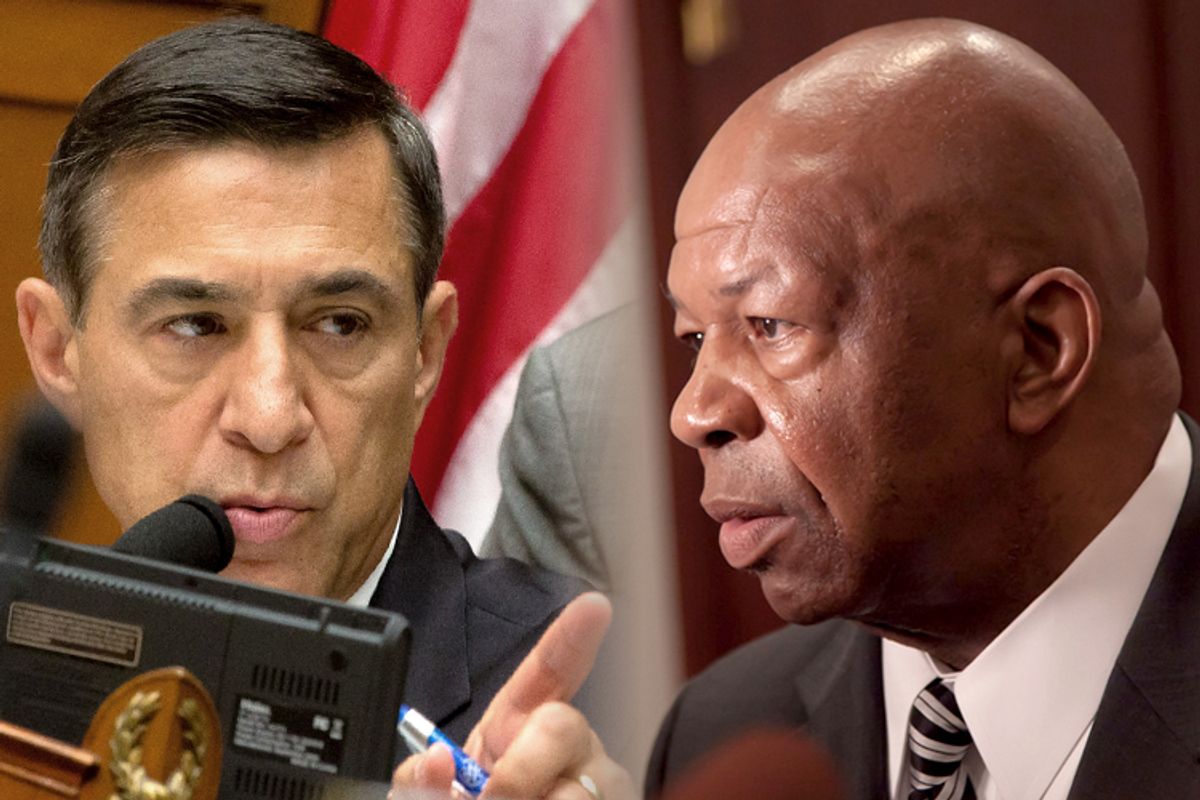 The internal war between House Oversight Committee chair Darrell Issa and ranking Democrat Elijah Cummings blew up again Tuesday, when Cummings released the full transcript of a five-hour interview with the conservative Republican IRS screening manager who said the very first Tea Party case was flagged by one of his own staffers, and denied any White House knowledge or involvement with the controversial screening policy. Part one is here; part two is here.

You’ll recall that Cummings had previously charged Issa with misrepresenting the Committee’s findings when he charged that the investigation was uncovering evidence that pointed to “Washington” involvement. Cummings demanded that Issa keep an earlier pledge to release all of the transcripts of committee interviews to date. Issa refused, calling Cummings “reckless” and “irresponsible” for sharing a partial transcript of the Republican screening manager's interview, and insisting any further disclosure of interviews would “undermine the integrity of the Committee’s investigation.”

Of course, Issa himself then leaked the transcript of an interview with IRS agent Holly Paz, a Washington, D.C. based supervisor who reviewed some of the applications, to USA Today, Reuters, the Wall Street Journal, the Associated Press and Politico. (AP also got to look at transcripts of interviews with agents Gary Muthert and Elizabeth Hofacre).

Issa seemed to think Paz’s testimony somehow proved that political meddling indeed came from “Washington,” neglecting the fact that the IRS is based there, and the Cincinnati screeners followed internal procedure by consulting Washington based supervisors. But as AP reported, Paz “provided no evidence that senior IRS officials ordered agents to target conservative groups or that anyone in the Obama administration” was involved.  (Media Matters breaks down the entire Paz story here.)

“Rather than working together in a bipartisan manner, Cummings wrote to Issa, “you apparently directed your staff to spend the weekend engaging in the same activity you condemned as “reckless” less than a week earlier.”

The Screening Group Manager explained that the very first case at issue in this investigation was initially flagged by one of his own screeners in February 2010.  He told us he agreed that this case should be elevated to IRS employees in Washington because it was a “high profile” application in which the organization indicated that it would be engaging in political activity.  He explained that he initiated the first effort to gather similar cases in order to ensure their consistent treatment, and that he took this action on his own, without any direction from his superiors, and without any political motivation.  He also confirmed that one of his screeners developed terms subsequently identified by the Inspector General as “inappropriate,” such as “Patriot” and “9/12 project,” but that he did not become aware that his screener was using these terms until more than a year later.

The manager’s testimony explains why some of the Tea Party applications wound up in Washington – although I’ve always had a hard time understanding how anyone could use the location of the federal government as a synonym for political meddling without any other proof.

These facts are a far cry from accusations of a conspiracy orchestrated by the White House to target the President’s political enemies.  At this point in the investigation, not one witness who has appeared before the Committee has identified any involvement by any White House officials in the identification or screening of Tea Party applicants for tax exempt status, and the Committee has obtained no documents indicating any such involvement.

As Cummings notes in his letter, the dueling transcript leaks by Issa and Cummings is understandably causing some people, even Republicans, to demand that the committee release the full interview transcripts. “Let’s see everything.  Let’s see it all.  And let’s see all the transcripts and you know let’s have a fair, objective analysis of this,” Sen. Rob Portman told a Cincinnati television station.

I doubt that Issa will find Portman any more persuasive than he does Cummings. But it’s nice to see Cummings try to keep Issa honest, even if that’s close to impossible.