Freedom from the dead battery menace

AT&T is bringing solar-powered recharging stations to the people. What could possibly be wrong with that? 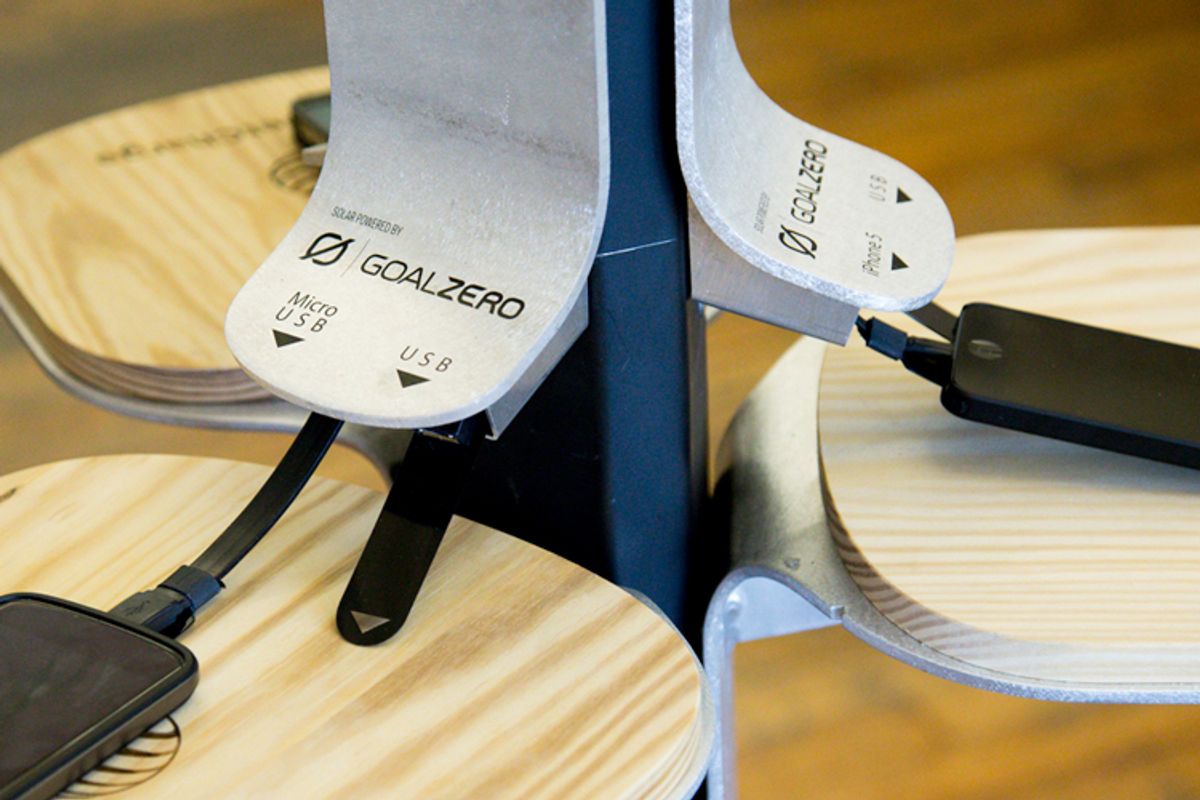 Solar power smartphone recharging stations are about to start popping up all over New York City, reports Verge.

...AT&T, solar kit manufacturer Goal Zero, and Brooklyn’s Pensa Design have unveiled Street Charge, a solar-based charging unit that debuts today at Fort Green park and will be rolled out across numerous city parks and public destinations throughout the summer.

Similar recharging stations were all the rage at SXSW Interactive this spring, which made sense, given how heavily the attendees relied on their mobile devices, and how concentrated we all were in one physical location. Whether or not busy New Yorkers -- the kind of always-on, permanently-stressed go-getters who tend to view their phones dying as a profound existential challenge -- will be willing to spare the time to hang out near a recharging station while getting juiced up remains to be seen.

What does AT&T get out of this charitable enterprise, aside from a branding boost? Phones with dead batteries are phones that aren't racking up data charges, so one explanation for AT&T's beneficence is the possibility that bringing free power to the smartphone masses will result in increased data consumption.

Imagine a world with free recharging stations everywhere! Our days lived in fear of that moment when the phone finally gives up in the ghost would be just a bad dream. Live, liberty, the pursuit of happiness and a recharged phone -- these are clearly all inalienable rights.

As I was pondering the question of how recharging stations fit into the surveillance state -- (hey, the more we use our phones, the more that the NSA and Facebook and Google can track us and target us) -- Nielsen released a new set of numbers tracking "second screen" usage -- the employment of mobile devices while watching TV. The numbers confirmed what everyone already knew. We're using our phones and tablets quite a lot while watching TV, and not just to check Facebook during the commercials. We're shopping for things we see on TV, looking up information about what we're watching, and participating in discussions with others about what we were watching.

"The time has truly arrived when we can say that we can have it all! As consumers, we have the freedom to move from place to place and bring content and information with us. We can walk out the door in the morning using our smartphone, sit on a commuter train shifting to the larger tablet screen and later, find the comfort of the big set as we sit down after a day out… or hide in a quiet spot to watch TV and TV-like content on our tablet, laptop or desktop computer. The choices are endless and media companies trigger the desire fueled by the ability to shift our habits to satisfy our needs - because we want it all, and have it all!"

And with solar-powered recharging stations positioned wherever we stop to take a breath, we never need to worry about our "want-it-all-have-it-all" lifestyles being disrupted!

It's true, the choices are endless. And one of those choices is to see a dead battery as freedom! Freedom from surveillance, freedom from incessant status updates, freedom from idiotic Nielsen executives who believe that interacting with multiple screens at the same time is the same as "having it all." I'm as tethered to my smartphone as anyone, but when I see that AT&T wants me to charge up for free, I feel my secret Luddite start to surge within. What's in it for them isn't necessarily good for me. A dead battery is not the end of the world. It could even be the beginning of a new one.