Today's congressional hearing was a joke. The reason: Firms like Booz Allen bankroll and own Congress. Here's how 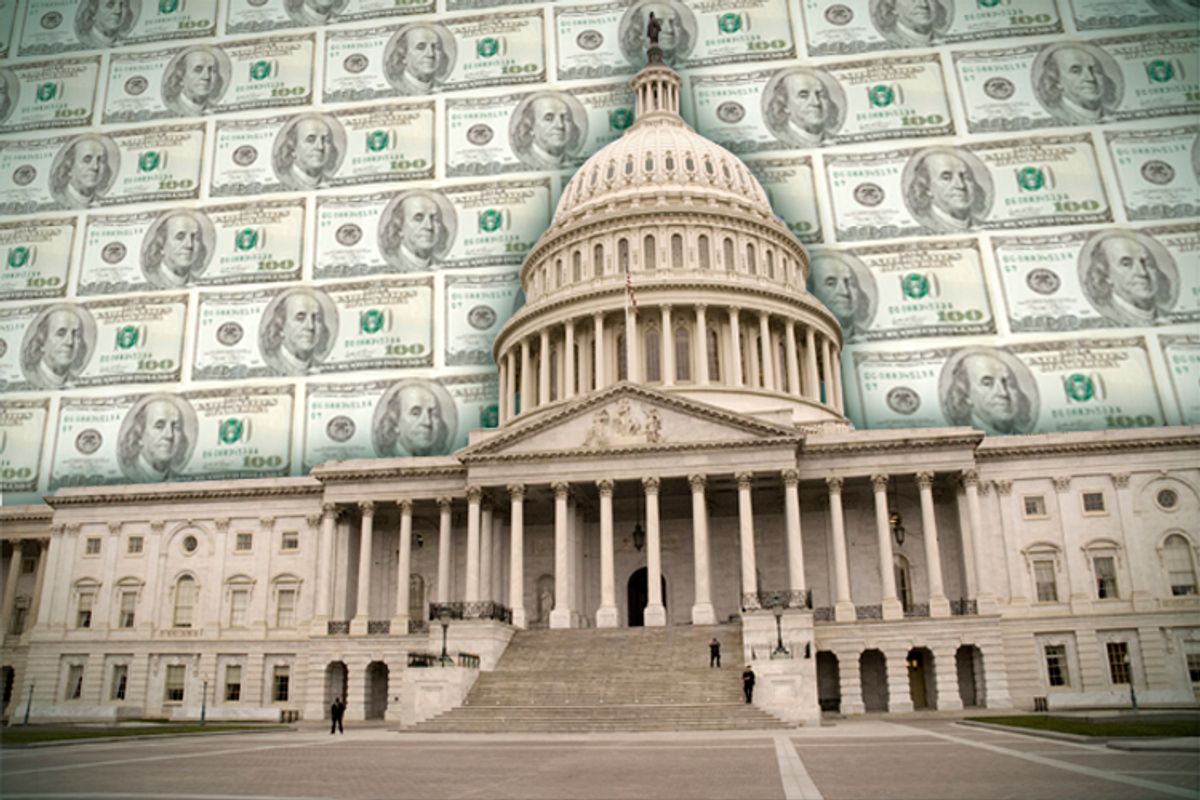 Have you noticed anything missing in the political discourse about the National Security Administration's unprecedented mass surveillance? There's certainly been a robust -- and welcome -- discussion about the balance between security and liberty, and there's at least been some conversation about the intelligence community's potential criminality and constitutional violations.

Thanks to what I've previously called the No Money Rule, however, there have only been indirect references to how cash undoubtedly tilts the debate against those who challenge the national security state.

Those indirect references have come in the form of stories about the business model of Booz Allen Hamilton, the security contractor that employed Edward Snowden.

CNN/Money notes that 99 percent of the firm's multibillion-dollar annual revenues now come from the federal government. Those revenues are part of a larger and growing economic sector within the military-industrial complex -- a sector that, according to author Tim Shorrock, is "a $56 billion-a-year industry."

For the most part, this is where the political discourse about money stops. We are told that there are high-minded debates about security and liberty, with politicians of differing parties contributing to those debates from positions of principle and ideology. We are also told in passing that there's this massively profitable private industry that makes billions a year from the policy decisions that ultimately emerge from such a debate.

Thanks to the No Money Rule among the Washington press corps, though, there is mostly silence about the connection between the private industry and the public policy. Indeed, few in D.C. are willing to say that the policy debate may be, in part, driven by the private industry and almost nobody dares mention that politicians' attacks on surveillance critics may actually have nothing to do with principle, and everything to do with going to bat for their campaign donors.

For a taste of what that kind of institutionalized corruption looks like, take a look at the amount of money Booz Allen Hamilton and its parent company The Carlyle Group spend on campaign contributions and lobbying. As you'll see, from Barack Obama to John McCain, many of the politicians now publicly defending the surveillance state and slamming whistleblowers like Snowden have taken huge sums of money from these two firms. Same thing for the political parties themselves - they are bankrolled by these firms.

This is just an example from two companies among scores, but it exemplifies a larger dynamic. Simply put, there are huge corporate forces with a vested financial interest in making sure the debate over security is tilted toward the surveillance state and against critics of that surveillance state. In practice, that means when those corporations spend big money on campaign contributions, they aren't just buying votes for specific private contracts. They are also implicitly pressuring politicians to rhetorically push the discourse in a pro-surveillance, anti-civil liberties direction -- that is, in a direction that preserves the larger political assumptions on which the profits of the entire surveillance-industrial complex are based.

The success of that pressure is exemplified by the title of today's congressional hearing with the head of the NSA, Gen. Keith Alexander. The hearing doesn't ask why Alexander lied to Congress or whether the NSA has engaged in illegal acts. No, a Congress bankrolled by firms like Booz Allen predictably calls the hearing "How Disclosed NSA Programs Protect Americans and Why Disclosure Aids Our Adversaries," the two preconceived assumptions being that 1) the NSA's surveillance programs, which generate huge profits for companies like Booz, are beneficial to Americans' security and 2) critics of those programs hurt the country.

None of this, by the way, is exclusive to debates over domestic national security policy. As Booz Allen's business model suggests, there are also foreign policy implications to the pay-to-play culture.

As the New York Times notes, the firm is expanding its profit potential by "marketing" its surveillance and security services to Middle East dictatorships that want to strengthen their grip on power. According to the Washington Business Journal, that includes Kuwait, Qatar, Omar, the United Arab Emirates, Saudi Arabia, Bahrain and "other countries" working to crush democratic dissent "associated with the Arab Spring." That means American politicians who are financed by Booz and other firms with a similar multinational business model not only have a vested campaign-contribution interest in shilling for the domestic surveillance state that their donors profit from. They also have a similar interest in denigrating the democratic protest movements that challenge Mideast surveillance states that make those donors big money, too.

Obviously, this kind of moneyed influence should be a critical focus of the political reporting on politicians' declarations about Snowden, the NSA, foreign policy and surveillance in general. When, for instance, a journalist reports on a politician slamming critics of the surveillance state, the public should be told whether that politician has taken money from firms that make their money off the continued expansion of that surveillance state. But that isn't happening thanks to the aforementioned No Money Rule in the Washington press -- and that rule isn't just about etiquette. On national security issues, it is often about the elite agenda-setting Washington media outlets that also financially rely on an ever-expanding national security state.

For a microcosmic (but not the only) example of that little-mentioned reliance -- and how it may skew the way the elite media frame the national security debate -- look at these side-by-side pages from the ultimate agenda-setting D.C. newspaper, Politico: As you can see, the ad on the left side is for a defense contractor. Like surveillance/security firms, it is part of a larger industry that relies on the ever-expanding national security state for its profits, and that therefore is hostile to national security state critics like Snowden. That industry invests heavily not only in politicians, but in advertising in Washington publications like Politico. Is it any coincidence that (as you can see on the right page) such publications loyally frame the debate over Snowden not as a question that ponders possible positive qualities (heroism, courage, etc.) but as a question exclusively of negatives: specifically, did he commit treason or is he a traitor?

Noting all of this isn't to allege conspiratorial micromanagement of politicians and media by the military-intelligence community. It isn't, for instance, to claim that everything that comes out of surveillance defenders' mouths comes from talking points provided by Booz Allen's lobbyists, nor is it to claim that Politico writers are directly ordered by their advertisers to depict national security critics on exclusively negative terms. It is actually to suggest something much more pernicious and ubiquitous than that.

As anyone who has worked in Washington politics and media well knows, the capital is not a place of competing high-minded ideologies; in terms of the mechanics of legislation and policy, it is a place where monied interests duke it, where those with the most money typically win, and where a power-worshiping media is usually biased toward the winners. In the context of money and national security, there is a clear imbalance -- there are far fewer moneyed interests whose business is transparency and protecting civil liberties than there are moneyed interests whose business is secrecy and curtailing civil liberties. That imbalance has consequently resulted in a larger environment in Washington that is so dominated by national-security-state money that the capital's assumptions reflexively, unconsciously and automatically skew toward the national security state without overt corporate orders ever having to be given to politicians or media outlets.

If the simplest, most straightforward explanation is often the most accurate, then this skewing is almost certainly part of why the pro-surveillance terms of the political debate in Washington are so at odds with public opinion polling on the matter. Big Money has helped create that disconnect, even though Big Money is somehow written out of the story.