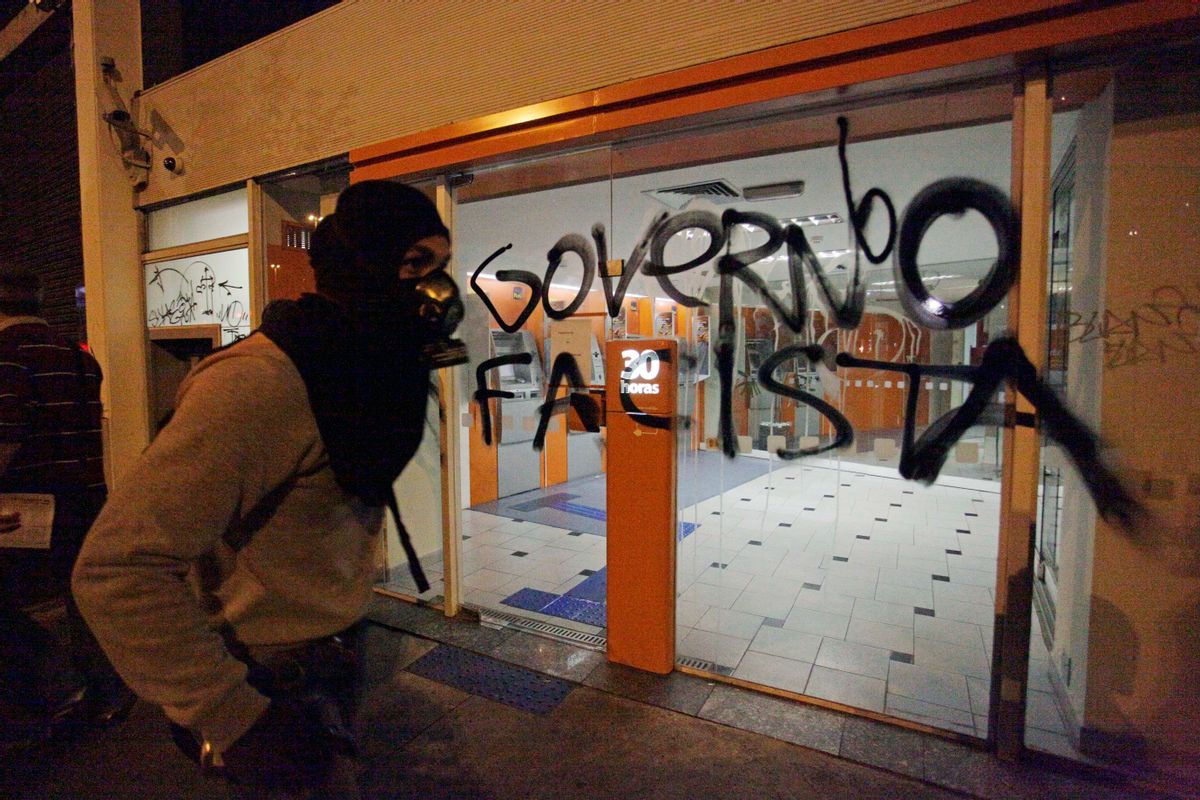 A demonstrator wearing a gas mask walks past a a bank covered by the words in Portuguese "Fascist government" at a protest against an increase in price for public transportation in Sao Paulo, Brazil, Thursday, June 13, 2013. (AP/Nelson Antoine)
--

In Sao Paulo, Brazil's economic hub, at least 65,000 protesters gathered at a small, treeless plaza then broke into three directions in a Carnival atmosphere, with drummers beating out samba rhythms as the crowds chanted anti-corruption jingles. They also focused on the cause that initially sparked the protests last week — a 10-cent hike in bus and subway fares.

Violence was seen in Rio de Janeiro, Belo Horizonte and the southern city of Porto Alegre. Police clashed with clusters of protesters in those cities, at times using tear gas to disperse them. In Rio, about 50 protesters tried to break into the state assembly building before being driven off. The newspaper O Globo, citing the state security department, said 20 police officers and 10 protesters were injured in Rio. In Porto Alegre, some protesters set a bus on fire and threw rocks at empty commuter trains.

Thousands of protesters in the capital, Brasilia, peacefully marched on congress, where dozens scrambled up a ramp to a low-lying roof, clasping hands and raising their arms, the light from below sending their elongated shadows onto the structure's large, hallmark upward-turned bowl designed by famed architect Oscar Niemeyer. Some congressional windows were broken, but police did not use force to contain the damage.

Rarely since the end of the 1964-1985 dictatorship has Brazil seen protests of such size.

"This is a communal cry saying: 'We're not satisfied,'" Maria Claudia Cardoso said on a Sao Paulo avenue, taking turns waving a sign reading "#revolution" with her 16-year-old son, Fernando, as protesters streamed by.

"We're massacred by the government's taxes — yet when we leave home in the morning to go to work, we don't know if we'll make it home alive because of the violence," she added. "We don't have good schools for our kids. Our hospitals are in awful shape. Corruption is rife. These protests will make history and wake our politicians up to the fact that we're not taking it anymore!"

The protests come after the opening matches of soccer's Confederations Cup over the weekend, just one month before a papal visit, a year before the World Cup and three years ahead of the 2016 Olympics in Rio de Janeiro. The unrest is raising some security concerns, especially after protests last week in Sao Paulo and over the weekend in Rio produced injury-causing clashes with police.

Protest leaders went to pains to tell marchers that damaging public or private property would only hurt their cause. In Sao Paulo, sentiments were at first against the protests last week after windows were broken and buildings spray painted during the demonstrations.

Police, too, changed tactics. In Sao Paulo, commanders said publicly before the protest they would try to avoid violence, but warned they could resort to force if protesters destroyed property. During the first hours of the march that continued into the night there was barely any perceptible police presence.

The Sao Paulo march itself was a family oriented affair: A group of mothers received a rousing cheer when they arrived at the plaza where the march began, brandishing signs that said "Mothers Who Care Show Support."

"I'm here to make sure police don't hurt these kids," said Sandra Amalfe, whose 16-year-old daughter chatted with friends nearby. "We need better education, hospitals and security — not billions spent on the World Cup."

Officers in Rio fired tear gas and rubber bullets when a group of protesters invaded the state legislative assembly and hurled things at police. But most of the tens of thousands who protested in Rio did so peacefully, many of them dressed in white and brandishing placards and banners. Many people in the city left work early to avoid traffic jams downtown.

In Belo Horizonte, police estimated about 20,000 people joined a peaceful crowd protesting before a Confederations Cup match between Tahiti and Nigeria as police helicopters buzzed overhead and mounted officers patrolled the stadium area. Earlier in the day, demonstrators erected several barricades of burning tires on a nearby highway, disrupting traffic.

Protests also were reported in Curitiba, Belem and Salvador.

Marcos Lobo, a 45-year-old music producer who joined the protest in Sao Paulo, said the actions of police during earlier demonstrations persuaded him to come out Monday.

"I thought they (the protests) were infantile at first because of my preconceived notions," Lobo said. "Then I saw the aggression."

Another protester, Manoela Chiabai, said she wanted to express her dissatisfaction with the status quo.

"Everything in Brazil is a mess. There is no education, health care — no security. The government doesn't care," the 26-year-old photographer said. "We're a rich country with a lot of potential but the money doesn't go to those who need it most."

In a brief statement, President Dilma Rousseff, who faces re-election next year and whose popularity rating recently dipped for the first time in her presidency, acknowledged the protests, saying: "Peaceful demonstrations are legitimate and part of democracy. It is natural for young people to demonstrate."

Ariadne Natal, a professor at the University of Sao Paulo whose research focuses on violence, said protesters want to "take advantage of this moment when we have foreign visitors, when the world's press is watching, to showcase their cause."

"The problem we've seen is that the police action is trying to prevent these protests," she said. "What we need to figure out is how the protests as well as the big events can be carried out democratically."

Brazilians have long accepted malfeasance as a cost of doing business, whether in business or receiving public services. Brazilian government loses more than $47 billion each year to undeclared tax revenue, vanished public money and other widespread corruption, according to the Federation of Industries of Sao Paulo business group.

But in the last decade, about 40 million Brazilians have moved into the middle class and they have begun to demand more from government. Many are angry that billions of dollars in public funds are being spent to host the 2014 World Cup and 2016 Olympics while few improvements are made elsewhere.

Protests are routine in Brazil, but few turn violent. Security experts say the demonstrations aren't the main danger for the hundreds of thousands of visitors who will descend on Brazil from now through the Olympics in 2016.

However, Joe Biundini, whose FAM International Group provides security details to executives attending the Confederations Cup, said there is a danger of escalating violence from the protests if authorities don't negotiate with demonstrators.

"If the government doesn't sit down with them it could get worse in future matches," Biundini said.