According to Gallup.com, nearly one in five hates work so much they sabotage their employers 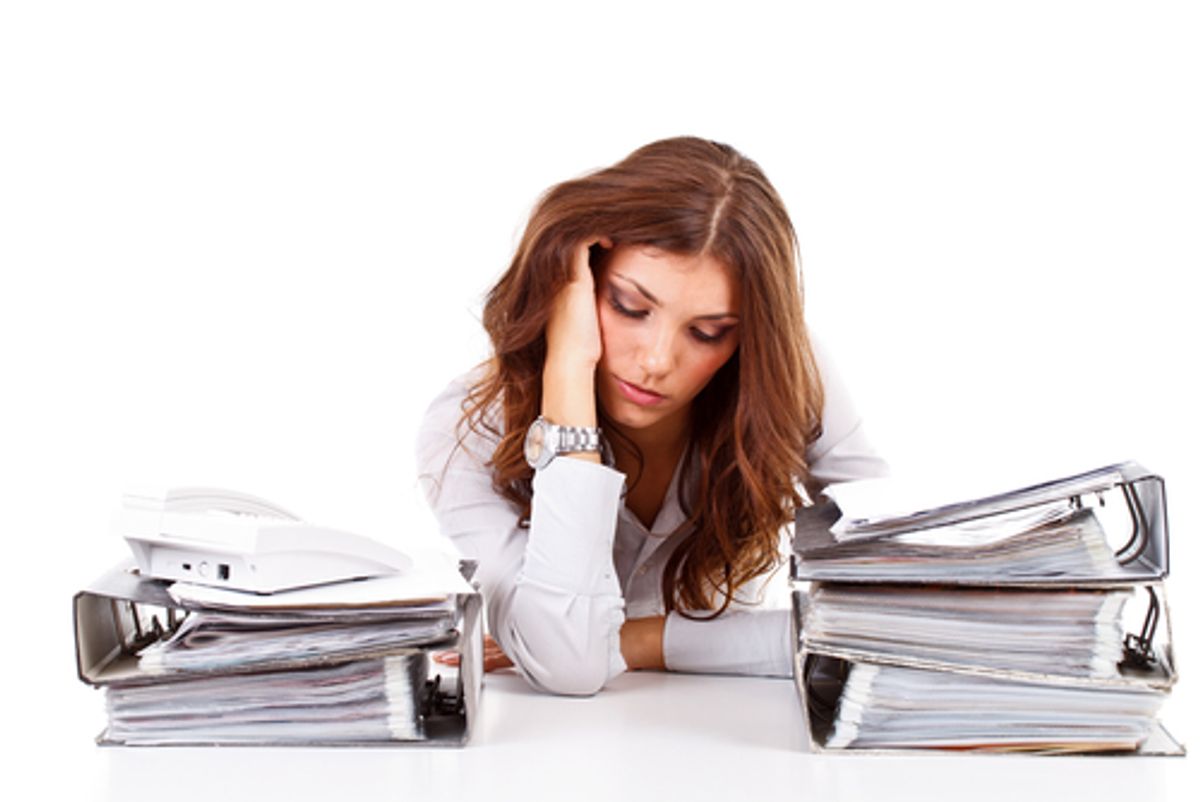 If you thought that Americans who kept their jobs during the Great Recession were glad to be working, you would be dead wrong. According to a Gallup.com report, 70 percent of American workers are “emotionally disconnected” at work, with nearly one in five employees “actively disengaged.”

It's zombieland out there for the American workforce.

Gallup’s ongoing “State of the American Workforce” survey reveals that America is largely a nation of working automatons, with most people not feeling emotional ties to what they do and sizeable numbers actively seeking to sabotage their colleagues and managers.

Which Americans hate their jobs the most? Educated young men appear to be the least committed to their employer, Gallup said, adding that lower-paying service sector jobs also have large percentages of alienated workers. In contrast, women are more loyal and attentive workers, as well as people who are at the beginning and end of their work lives.

“Millennials are most likely of all generations to say they will leave their jobs in the next 12 months if the job market improves,” Gallup found. “Employees with a college degree are not as likely as those with less education to report having a positive, engaging workplace experience.”

Gallup’s annual workplace survey is conducted as part of its effort to market its services to firms that are seeking to boost employee morale. Its findings haven’t changed over the past decade, with only 30 percent of Americans saying they are emotionally engaged at work. The recent Great Recession and spike in unemployment did not affect that trend.

Gallup read 12 statements to workers across the country about their work and asked for comments. The statements included, “I know what is expected of me at work,” “At work my opinions seem to count,” “I have the opportunity to do what I do best every day,” “In the last seven days, I have received recognition or praise,” “Someone at work seems to care about me as a person,” and “My associates… are committed to doing quality work.”

Gallup has surveyed 25 million workers in 189 countries since the late 1990s. It describes three kinds of employes: engaged, not engaged and actively disengaged.

“Engaged employees work with passion and feel a profound connection to their company. They drive innovation and move the organization forward,” Gallup said. “Not Engaged employees are essentially ‘checked out.’ They’re sleepwalking through their workday, putting time—but not energy or passion—into their work. Actively disengaged employees aren’t just unhappy at work; they’re busy acting out their unhappiness. Every day, these workers undermine what their engaged coworkers accomplish."

Curiously, Gallup suggests that Americans in red states might be better employees than in blue states, because being emotionally engaged is key to better productivity.

“Gallup found that at the opposite end of the engagement spectrum, more than one in five (21 percent) workers in Rhode Island are actively disengaged, as are 20 percent of employees in New Jersey, Connecticut, Pennsylvania, New York, Michigan, Vermont, Kentucky, and Illinois. Wh en looking at the range of actively disengaged employees, Idaho had the lowest percentage of this type of worker, at 14 percent.”

As you might expect, Gallop places the blame for a nation of alienated workers squarely on the desks of managers and executives, who never learned basic people skills to make others feel good about themselves and their work.

“Gallup’s research has found that managers are primarily responsible for their employees’ engagement levels,” the report said. “Organizations should coach managers to take an active role in building engagement plans with their employees, hold managers accountable, track their progress, and ensure they continuously focus on emotionally engaging their employees.”

Intriguingly, people who work remotely seem to be more emotio nally connected to their work—or at least put in longer hours, Gallup said. “Despite not always having a manager nearby to monitor their productivity, remote workers actually log more hours at their primary job than do their on-site counterparts.”

Gallup also found that companies of less than 10 people, or teams within companies that size, have the most committed workers, “suggesting something unique and beneficial about working in a smaller, tight-knit work environment when it comes to engagement.”

The polling organization also found that employers tended to treat recent college graduates poorly, instead of making them feel valued. “Despite the benefits that the increasingly educated workforce is expected to bring to the U.S. economy, it appears that employers are doing too little to engage this influx of college graduates in their workplaces.”