Darrell Issa is terrible at his job

As usual, the House Oversight Committee chairman is losing the plot on the IRS investigation 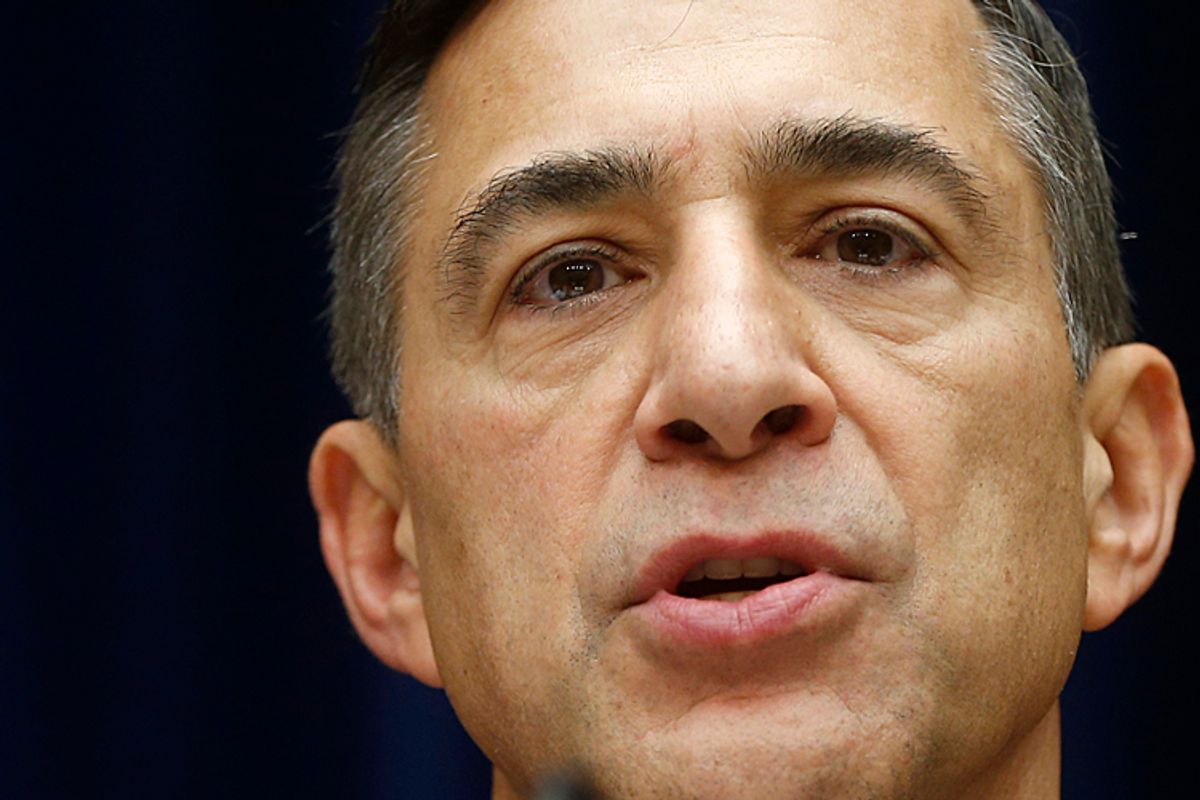 In case you lost track of the IRS scandal, here's where it's at right now: House Oversight Committee members are releasing dueling transcripts of witness testimony to the press. There is a big fight about it. It is maybe kind of boring.

Darrell Issa, Republican chairmain of the committee, has been selectively releasing snippets of testimony to the press, all of it designed to support his contention that the IRS targeting of conservative groups for additional scrutiny of their nonprofit status was a political maneuver ordered or somehow directed by the White House. There is literally no evidence for that claim and it's not true but Issa is sort of bad at his job in many important respects. Democratic ranking member Elijah Cummings asked Issa to please release full transcripts of witness testimony, but Issa refused, so Cummings just did so, with a full transcript of the committee's interview with an IRS employee who seems to have been the first one to flag a "Tea Party" group's application for tax-exempt status for further review.

This employee describes himself as "a conservative Republican" and he states outright that there was no political motivation, and certainly no White House responsibility, for the IRS's actions.

Issa's response to this is to claim that releasing the testimony will hurt his investigation because it will provide a "road map" for future witnesses wishing to mislead the committee. (Denying that politics had anything to do with it, who else would have independently come up with that?) The right-wing media response has been to basically ignore the content of what Cummings released and to trash him for attempting to defend the White House.

Cummings isn't trying to sway right-wing bloggers, though. He's not even trying to sway the public at large. What he's trying to do is get the press to say outright what everyone in Washington already knows: Issa never has the goods to back up his claims. Cummings is trying to make it possible for the press to challenge Issa's credibility without violating their own rules of objectivity.

Of course, everyone in the political press knows that Issa is a publicity hound who regularly makes outrageous accusations and insinuations and rarely has any evidence supporting his more outrageous claims. Everyone in the press knows this, but conventions of objective journalism prevent them from saying as much to their audiences, and so 47 percent of Americans believe the White House directly instructed the IRS to target conservative groups.

In that respect the IRS investigations looks like a huge success. But Issa's record is actually really terrible. He has investigated everything he can think of and nothing went anywhere.

House Judiciary Committee Chairman Darrell Issa's one job is to get scalps. He is supposed to force embarrassing resignations. He has not yet forced a single one. When Issa took control of the House Oversight Committee in early 2011, he announced plans to investigate WikiLeaks, Fannie Mae, corruption in Afghanistan, the FDA, the Financial Crisis Inquiry Commission and business regulations. He has investigated Solyndra and Fast and Furious and Benghazi and come up with nothing. So far the acting commissioner of the IRS has resigned, because the president asked him to. Issa hasn't managed one single clean hit.

What Issa has managed to do is create a series of very silly graphics hyping his investigations in the style of funny image macros and film posters. He has managed to make conservatives agree with him that Barack Obama is the most corrupt president in history and he has managed to make a large minority of voters feel that the White House is probably hiding something.

In terms of the 2014 elections, he is, so far, probably helping the GOP more than he is hurting it. So Issa's record, honestly, is mixed. He is quite bad at his job in most respects, but not quite as historically useless as Tea Party mascots like Louie Gohmert. But it does seem to me that Republicans would be better served by not having an incompetent glory hound chairing the most politically useful House committee. I guess they don't have a lot of great options, considering the rest of the House GOP.