The actor talked to Salon about his role in "Maniac," and how he'd love to see "A Wrinkle in Time" on-screen 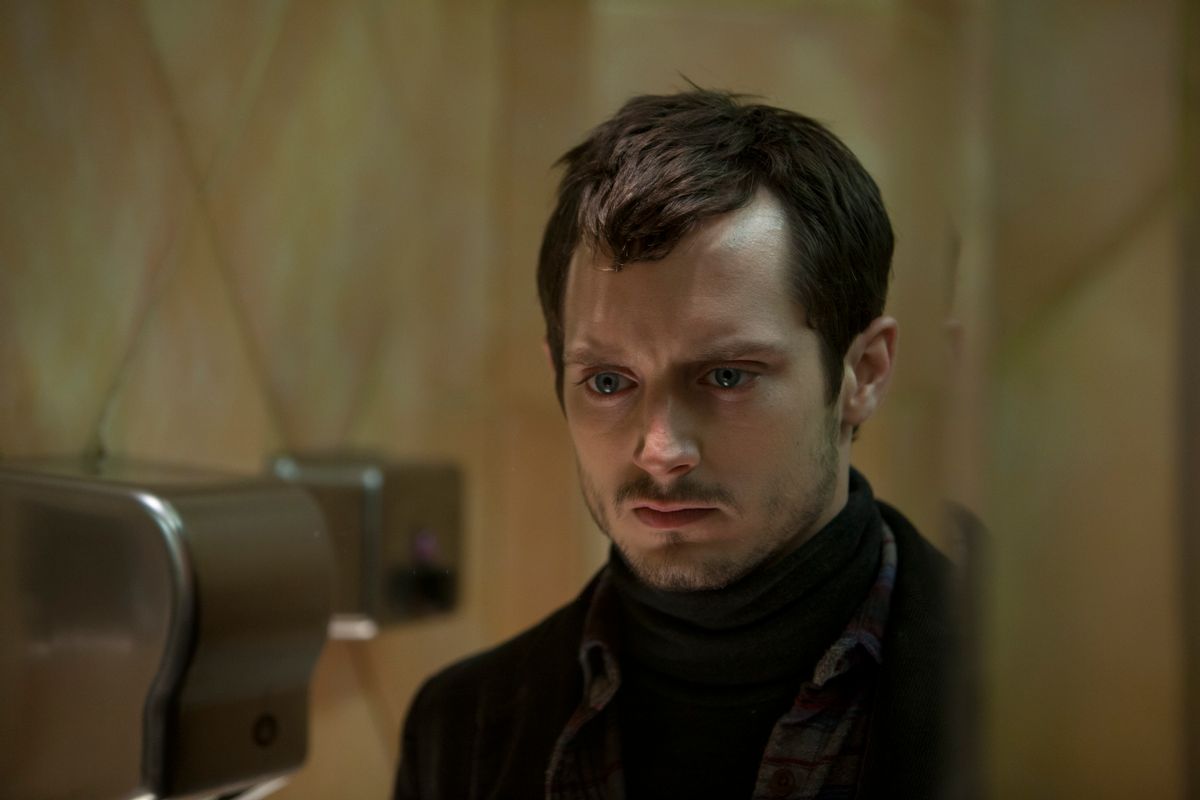 Elijah Wood, 32, has been acting on the big screen for three quarters of his life -- but in "Maniac," Franck Khalfoun's remake of the 1980 slasher movie of the same name, Wood manages to find a new challenge: playing the serial killer Frank Zito in a film shot almost entirely through Zito's point of view. Wood creates Zito's persona through the actions of his hands, his breathing, his muttering and where his gaze lands.

Wood, probably most famous for playing Frodo in "Lord of the Rings," has largely avoided falling into the "child star" trap or being typecast, by looking for roles that keep him on his toes. Since "Lord of the Rings," he's played a serial killer as a supporting role in "Sin City," a young adult on an emotional journey in indie film "Everything Is Illuminated," a supporting role as creepy Patrick in "Eternal Sunshine of the Spotless Mind," and the severely depressed, hallucinating Ryan in FX's TV show "Wilfred." Wood talked to Salon about the future of the film industry, his favorite books and what it's like to play the villain.

One of the reasons "Lord of the Rings" was so iconic was because it was a literary epic. You're a big reader: Is there another literary character that you'd love to play?

There’s a book called "House of Leaves" by a guy called Mark Danielewski. It was his first novel and from an initial observation, it’s almost seemingly unfilmable: Three narratives and filled with footnotes and additional writings as you’re reading. I mean, it’s an extremely complex novel. It doesn’t really lay itself out in any kind of linear way that would lend itself to a film. I think I’m fascinated by the idea of that movie, or that book being adapted on some level, maybe even in a nontraditional way, but I’ve found the experience of reading the book incredibly engaging and almost cinematic and a bit like a journey, so that’s something that’s always fascinated me.

There’s a book called "Girlfriend in a Coma" that I’ve always loved, by Douglas Coupland, that I think would lend itself to an excellent film. I know that they’ve actually tried to make that into a television series recently, funnily enough. I don’t know quite how it lends itself to a TV series but it’s a book I’ve always loved.

And then there’s a book called "Flicker," and the reason it was initially brought to my attention was because I think Darren Aronofsky was attached to direct it at some stage and I believe there is a script floating around, but it’s an amazing story about cinema and hidden messages and cults. It’s really amazing. Also a very difficult book to adapt. It’s broad, but amazing. So there are things like that. I don’t know that there’s a "Narnia," or "Lord of the Rings," or some sort of trilogy that I grew up reading that I would love to see adapted. I mean "A Wrinkle in Time" is due for an adaptation, I think. That would be fucking awesome.

Yeah, that book was a favorite of mine as a kid.

It was a favorite of mine, too. The thing about "A Wrinkle in Time" that would be great now is it’s very dark and very grounded. Cause it’s a dark fucking book and I think to go, for lack of a better description, the "Lord of the Rings" route, which is root everything in reality and not make it as bright and colorful, I think would be awesome. "A Wrinkle in Time" is awesome.

"The Giver!" Fuck, man, you know they’ve been trying to make that for years. Jeff Bridges, for the longest time, has had the rights to "The Giver." That is a film, especially if you don’t hold back on its darkness, that could be so incredible. It’s a great dystopian story, but there’s also something really hopeful. Yeah, that’s a great book.

Your role in "Maniac" is one of the darkest you've played. Can you talk about what that experience was like and why you took the role?

I was attracted to the role for a variety of reasons. I think I am always looking for a challenge and horror is something that I have not explored much before, so that was intriguing. I was also really intrigued with the notion of a character that you largely don’t see. That, for the most part, you’re experiencing subjectively, through the character’s eyes. And I knew one of the producers, so it was originally proposed that: "We’d love for you to play the villain in this film and it would be two weeks of work just to film your reflections." But that notion of only being seen in reflection, or predominantly being seen in reflection, is intriguing, and the fact that Alex Aja had written and was producing the remake was exciting to me. I had been a fan of his work as a director.

And of course, it wasn’t just two weeks of work to shoot my reflections. It was four weeks of being on set. I think, you know, we were all a bit naive going into it, I guess. I think in their mind they were like, "Oh, well he’ll just shoot the reflections and he’ll get a double for his hands," but I also felt like, "Well, those hands that you’ll see in the frame, I’d like to make the choice about what those hands do, so I’d like to be there as an actor" and they’re like, "Yeah, of course! We just didn’t know if you wanted to.” Well, of course I want to be there. So, it became a really wonderful exploration because every day we would approach these scenes, which we couldn’t rely on traditional editing for because effectively they were single shots.

And then there are these reflection shots and also these kind of third-person perspective shots killing women and then there was also me recording all of my dialogue, so it was these three different ways all coming together to make one main character.

Some actors try to really enter the mind of the character to get into role -- Heath Ledger created a journal for the Joker. Do you try to immerse yourself like that?

No, I think that would have been a disturbing place to be for four weeks. I think it may have been different if I were to have been on camera the entire time, but the process was a little bit more disjointed.

But at the same time, that’s not necessarily my method. I don’t embody a character 24 hours a day whilst playing that character. I tend to turn off and turn on when it’s appropriate. But I also kind of knew that the majority of the character would really be created vocally in a way, because most of what you experience, you don’t see. So that's kind of where I felt a lot of the character work would be finalized and done. You know, finding his voice and what he sounds like when he’s by himself and when he’s kind of in his more quiet spaces.

Over the years, you've avoided being typecast, and you've mentioned integrity as a key factor in the kind of role you take on. You've acted in major blockbusters, played supporting characters in indie films, done TV shows and music videos ... so maybe it makes more sense to ask whether there's any kind of role you wouldn't touch?

I’m not particularly drawn into things that are on a more commercial level. It’s harder to find artistically pleasing stories and characters within the context of more commercial films but it's also not to say that doesn’t exist.

I feel like there isn’t necessarily a limit. I don’t know that I’ve thought about roles that I definitely wouldn’t take. I think I’m always just looking for new experiences, not only different kinds of roles, but different kinds of films and different kinds of filmmakers. In some ways, I’m more excited by a filmmaker and an approach to storytelling as much as I am to the individual character I’m playing. ["Maniac"] is a good example, and in some ways I’m just as intrigued as an actor to be a part of something that tells a story in this way as I am portraying the character.

"Lord of the Rings" is a great example of mixing a series of films that are very commercial and yet deeply satisfying. It’s just hard to find a combination.

Steven Spielberg recently predicted the implosion of the film industry. You own a production company -- is this something you think about too?

I see the same trajectory. Steven Soderbergh actually also recently had very similar words about the industry. The way that the studios are set up right now, it’s not really conducive to telling smaller stories. There haven't been, for a long time, any middle ground films. There are either films that are made for very little money, or a lot of money, but that was not always the case. Studios used to make movies for $20 million, $15 million, $30 million, and those movies aren’t really being made anymore. It makes total sense -- all of the money is being put in a select few. Therefore, the hopes and dreams of the studio are being based on the eggs being put into a few baskets as opposed to a wider swath. And if those few aren’t successful, it just kind of makes sense. It’s going to start to fall apart.

And I feel like audiences are starting to get a little bit wiser. We’re inundated with a lot of similar types of films, now. And what’s been interesting is a few of those movies that on paper should have been hugely successful weren’t at all, and that’s been happening more and more frequently. So I think that they’re sort of speaking to that too: that audiences are starting to become more savvy, and are tired of being inundated with the same giant tentpole film after another. It’s a weird time, that we’re in. I also find it very exciting.

But also what’s happening concurrently -- is that independent films are being commissioned again. They tend to run in cycles, but it feels like it’s like the Wild West again in regards to independent cinema. [Video on demand] has created a really interesting opportunity for movies that may not have seen a large audience, where they would have only played in art house cinemas in major cities, are now suddenly being exposed to a much wider swath of people. So, as much as it’s sort of a dire time, what they’re speaking about -- a sort of potential implosion of the movie industry as we know it -- I think there’s a lot of exciting things that are happening, too.

"Maniac" opens in select theaters and VOD on Friday, June 21.