Serena's rape victim-blaming got everything wrong 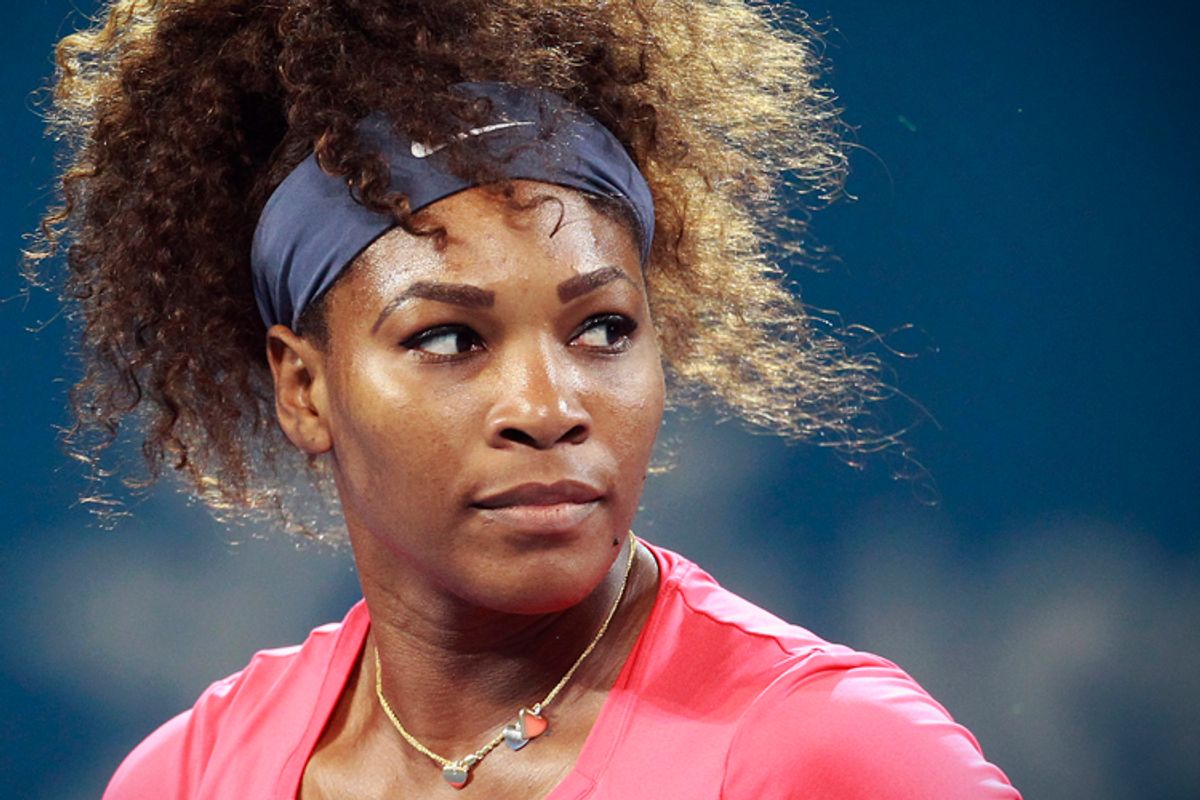 In an interview called "The Great One" Rolling Stone posted on Tuesday, the tennis champ held forth on everything from her career to her nails, but it was her comments about the Steubenville rape that got most immediate – and strongest – reaction. As she watched a news report on the case with journalist Stephen Rodrick, she asked, "Do you think it was fair, what they got? They did something stupid, but I don't know." In March, 17-year-old Trent Mays and 16-year-old Ma’lik Richmond were found guilty of raping an unconscious classmate in August of last year. The assault first came to light after blogger Alexandria Goddard  exposed a series of damning social media evidence from the night joking about the incident. "I'm not blaming the girl," Williams said before going on to blame both her and her parents, "but if you're a 16-year-old and you're drunk like that, your parents should teach you: Don't take drinks from other people. She's 16, why was she that drunk where she doesn't remember?"

The problem with Williams' remarks is that there actually is a way to discuss sensible, risk-averse practices without describing convicted sex offenders as merely "stupid," and victims as "lucky." She just didn't do that. Writing in Forbes Wednesday, Bob Cook astutely acknowledged that "I HAVE cautioned my teenage daughter about what and what not to do in party situations, particularly about taking an open drink from a stranger." But he added, significantly, "No matter how much she had to drink, or what skirt she wore, or what someone thought they heard her say earlier, a rape victim is that — a victim."

For her kicker, Williams, ever the optimist, groped for the bright side in it all. "It could have been much worse. She's lucky," she said. "Obviously, I don't know, maybe she wasn't a virgin, but she shouldn't have put herself in that position, unless they slipped her something, then that's different."

What followed, predictably, was a torrent of "Whaaaaaa?" as various news agencies picked up on the remarks. And of course, what followed soon after that was a weak apology on her website that threw a little more gasoline on the fire she'd already set. Let's deconstruct it, shall we? "For someone to be raped, and at only sixteen, is such a horrible tragedy!" she begins. Here's side note No. 1: Rape does not become an exponentially better experience the older the victim is, any more than it's pleasanter if she "wasn't a virgin."

Williams says the incident was a tragedy "for both families involved – that of the rape victim and of the accused." Side note No. 2: While it is undeniably a depressing and wasteful thing that two young men made choices that directly and deeply hurt another human being, their "tragedy" is not equivalent to that of the victim. Don't even put them in the same sentence. Just don't. Do not. It's a vile trope that was also trotted out Tuesday when the Wall Street Journal's James Taranto decided that there's a "war on men" and a deliberate "effort to criminalize male sexuality." In his piece, Taranto bemoaned that Capt. Matthew S. Herrera, who was court-martialed in 2012 for aggravated sexual assault, saying that he'd been reckless but "his accusers acted recklessly too." Female recklessness, per Taranto: drinking, getting in a car with a colleague.

In her quasi-mea culpa, Williams goes on to say she is reaching out to the girl's family, and that "I am deeply sorry for what was written in the Rolling Stone article. What was written – what I supposedly said – is insensitive and hurtful, and I by no means would say or insinuate that she was at all to blame." Side note No. 3: Speaking of blame, Williams implies that her remarks, for which she says she is sorry, are only what she "supposedly" said. That's a cheap and cowardly move. Rolling Stone's Stephen Rodrick, speaking to Poynter Wednesday, said, "The interview is on tape. Other than that, I’ll let the story speak for itself."

Finally, Williams asserts her fight for women's equality, ending with, "My prayers and support always goes out to the rape victim. In this case, most especially, to an innocent sixteen year old child." This is perhaps the most nauseating part of the statement. It stinks because it plays right into that false and narrow narrative our culture writes again and again about rape victims. Williams casts the Steubenville victim initially as a "drunk" who may not be a virgin. Then, when challenged, she recasts her as "an innocent." The message is as clear as it is revolting. You're one or the other. Your victimhood is made possible by your innocence, your culpability by your age, your sexual experience, your drinking.

So here's a reminder: Rape doesn’t just happen to people who've been deemed sufficiently "innocent." Rape isn't something "stupid" that guys just somehow accidentally commit. To suggest so is insulting to both sexes. And it makes you a loser, no matter how many championships you've won.