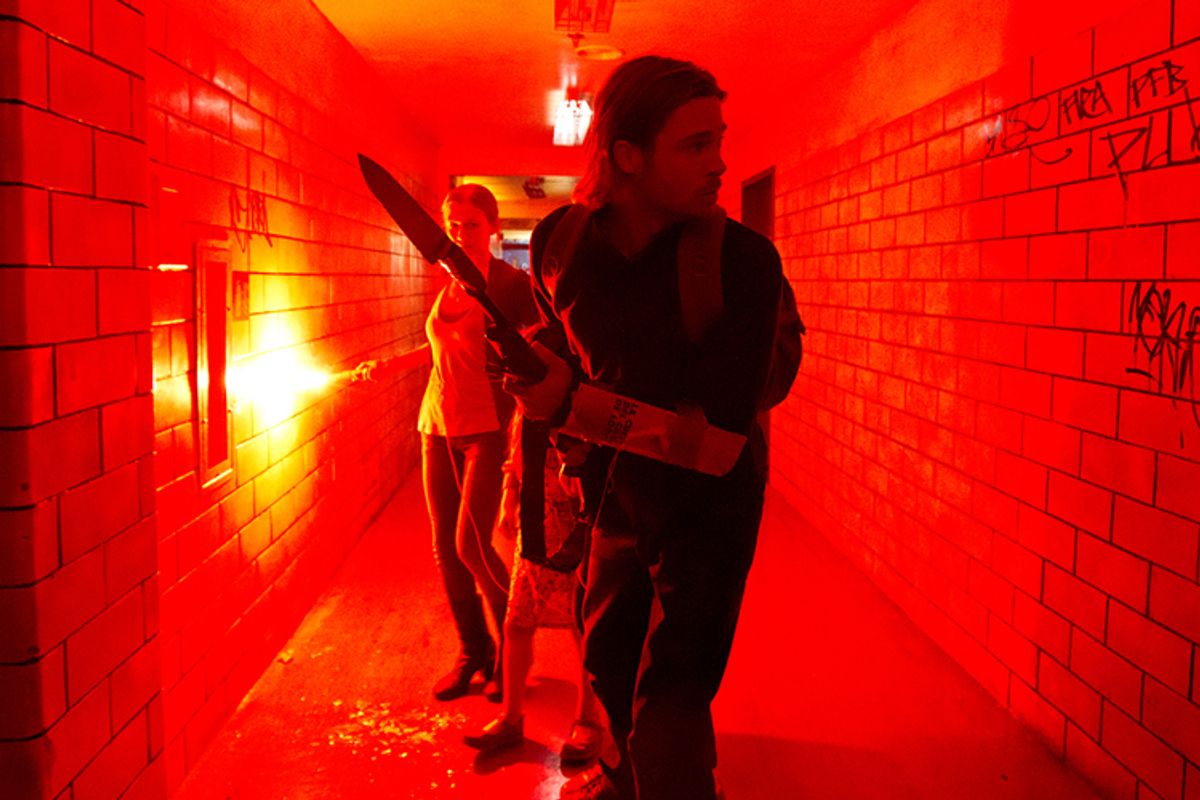 You’re a lot better off if you see “World War Z” while putting all the Hollywood news and gossip surrounding the film out of your mind. If you don’t think about its tormented production history, its multiple rewrites and reshoots, or a budget that purportedly reached close to $200 million, what you get from Marc Forster’s movie is an expertly paced action thriller in a familiar apocalyptic vein, on a near-epic global scale and featuring some truly breathtaking set pieces. Yes, it seems severely underexplained and oddly curtailed; indeed, after two hours it pretty much just stops, rather than reaching any satisfying denouement. But “World War Z” is a genuinely exciting thrill ride that only occasionally feels bloated or painfully dumb; and overall it’s a good enough summer popcorn flick that Paramount Pictures execs can go to sleep tonight without an entire bottle of Ambien.

Now as to the supposed bigger questions, such as whether this movie has any reason for existing in the first place, whether it has anything to say and whether it adds anything remotely new to the swollen carcass of zombie cinema – I can’t help you there. No, wait, let’s back up: Actually, the first part of that is easy. One of the problems “World War Z” has faced all along is that it looks like a high-concept zombie-apocalypse movie (adapted from Max Brooks’ novel, told as a series of first-person accounts) but it’s really something we don’t see that often these days, an old-fashioned Hollywood star picture. Brad Pitt helped produce the movie, and considering its immense scale and enormous population (both live and undead), he appears on-screen a remarkable percentage of the time, playing one of those indestructible super-secret-agent guys customarily portrayed by Tom Cruise.

It’s not such a great fit. I’m not a Pitt hater by any means, but he lacks the loony edge and native intensity that makes Cruise so perfect for control-freak, OCD-type spook characters. Pitt always looks as if he’s preoccupied by something or drifting off into his private happy place, a quality that was used beautifully by Terrence Malick in “The Tree of Life” and Bennett Miller in “Moneyball,” but is somewhat less desirable when you’re trying to stop the human race from being devoured by zombies. It may also be that United Nations superspy Gerry Lane, Pitt’s character here, has had every possible smidgen of personality sanded away by the five credited screenwriters of “World War Z” (and God knows how many others behind the scenes) in the interests of “protecting the star,” as they say in the trade. So Pitt spends a lot of the movie seeming bored and irritated that zombies have interrupted his Sunday with the family.

On the other hand, I really enjoyed seeing the odd, feral-looking beauty Mireille Enos (of TV’s “The Killing”) as Pitt’s on-screen wife; I wish she had more to do in the film than hunker onboard an aircraft carrier with their kids, hoping the zombies won’t learn how to swim. Here’s what happens in the movie: Zombies attack, human civilization collapses, and Brad Pitt has to figure out what to do about it, pretty much single-handed. No, really, that’s it! The writing team, which includes the “Lost” duo of Drew Goddard and Damon Lindelof, along with Matthew Michael Carnahan (“State of Play”) and TV veteran J. Michael Straczynski, has essentially aggregated bits and pieces of almost every zombie movie and epidemic thriller of recent decades. At different points in the story, “World War Z” strongly resembles Zack Snyder’s “Dawn of the Dead” remake and Steven Soderbergh’s “Contagion,” and I suppose Danny Boyle and Alex Garland should be flattered by the Vulcan mind-meld level of rip-off perpetrated upon their 2002 near-masterwork “28 Days Later.”

All those movies I just mentioned are quite likely at least a little bit better than this one, but “World War Z” is without question the biggest thing ever done in this genre. I have gravely mixed feelings about every movie on Marc Forster’s résumé, from “Monster’s Ball” to “Stranger Than Fiction” to “The Kite Runner” to the 2008 Bond film “Quantum of Solace,” but the guy is undeniably a stylistic virtuoso with a Michael Winterbottom-like ability to jump around from one genre to another. Whatever caused all the production angst on this film I don’t know, but you never get the feeling that Forster loses control of the images, and “World War Z” contains several of the most effective big-canvas action sequences in recent history.

After an ordinary Philadelphia traffic jam turns into a zombified nightmare – like Zack Snyder’s zombies, these are ultra-fast when hungry or motivated, and like Boyle’s infected people, those bitten convert almost immediately – Gerry and his wife and daughter fight their way to a rooftop in Newark, N.J., where a U.N. black helicopter comes to extricate them. (Do Forster and the writers know they’re channeling right-wing paranoia here?) There’s a bit of clumsily handled blah-blah-blah exposition about how the president’s dead, Washington is overrun and most of the world’s big cities have “gone dark.” But who cares about that? Zombies! Maybe the North Koreans have survived by pulling the teeth of everyone in the country. (This bizarre theory supplied by David Morse, as a renegade CIA agent who apparently snuck in from some weirder and more interesting film.) Maybe the Israelis have survived by building a wall. Ha!

The Newark apartment-building siege is terrific and so is the claustrophobic shaggy-dog episode in Korea, where Gerry and a young virologist visit an embattled group of U.S. Army soldiers at one possible ground zero, where it’s apparently always night and always raining. This movie’s script is so disorganized that clues are scattered throughout that never amount to anything: People bitten by zombies convert to zombies within 12 to 15 seconds, except that the soldiers in Korea report it takes much longer, up to 10 minutes or so. This discrepancy means – nothing, apparently.

Anyway Gerry’s soon off to Israel for a visit that neatly combines 9/11 anti-Semitic paranoia (the Jews knew what was coming and were ready) with Chosen People mythology, in which Israel has uniquely resisted the apocalyptic plague and now stands as a Light Unto the Nations. It’s extremely strange, but like the entire movie feels too haphazard to deliver any coherent political meaning. But, yes, the Israeli security barrier meant to keep Palestinians out also works on zombies, at least until Gerry gets there and the zombies, behaving increasingly like humanoid ants or termites, form a sort of boiling mass and come teeming over the wall. It’s a show-stopper, and amid the chaos Gerry does notice something that proves key to a possible “scientific breakthrough,” something so glaringly obvious that it took a Brad Pitt character with no medical or epidemiological training to think of it, I guess.

We also get a zombies-on-a-plane episode and a tense foray into the terrain of “The Stand” or “The Andromeda Strain” in a zombie-infested medical laboratory where Gerry and a buzz-cut, one-handed female Israeli soldier (the terrific Daniella Kertesz) must search for the highly implausible secret MacGuffin that will fix everything. Except only kind of and not really. It’s all extremely well done, in the technical sense, but the dramatic and moral laziness of “World War Z” is immense, in rather the same fashion as Steven Spielberg’s 2005 “War of the Worlds” remake. All of our worst fears have come true and the world has undergone unspeakable devastation and large-scale extermination. Civilization must be reconstructed atop the smoldering corpses of 90 percent of our neighbors. But it’s OK! Because Brad Pitt’s cute daughters survived, and because the ride was kind of fun.